Shotgun Players' The Black Rider Is a Bleak Musical

You can't hide from the dark. 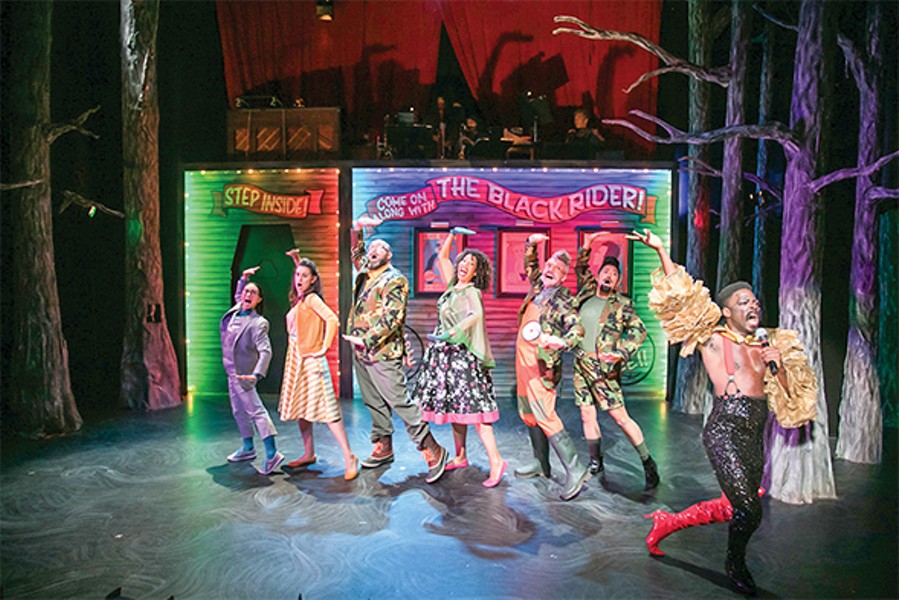 Photo by Cheshire Isaacs The Black Rider is a dark morality tale.

It's been five years since Shotgun Players produced their moody musical Woyzeck as their alternative-to-the-holidays extravaganza. Which means just enough time has gone by to give another Tom Waits/Robert Wilson musical the Shotgun treatment. Perhaps through serendipity — but more probably in the spirit of not wanting to mess with a winning formula — the creative team of Shotgun's The Black Rider: The Casting of the Magic Bullets, as with Woyzeck, is helmed by Shotgun company member Mark Jackson, as director, and David Möschler as music director. Cast and crew also include several returning Woyzeck alumni, notably costume designer and company member Christine Crook, musical stalwarts Josh Pollack and Travis Kindred, and quintessential Jackson collaborator Kevin Clarke (also a company member).

For Jackson, whose background includes residencies at the Deutsches Theater and the Mime Centrum in Berlin, and a body of directorial work that skews decidedly Germanic, a bleak musical based on a bleaker German folktale about a predictably unfortunate deal with the devil fits neatly into his oeuvre. Our Devil, aka Peg Leg (Rotimi Agbabiaka) is delivered to the stage via a slowly gliding, oversized coffin. He's dressed like a glam legionnaire with giant golden sleeves, a bare chest, and a single, blood-red, thigh-high stiletto boot. He stalks the stage with genial menace, a devil one would have a hard time refusing. One by one, the rest of the cast joins him onstage, propping themselves up against the set wall as if in a shooting gallery, as the haus band ("The Hex Pistols") plays the carnival-esque overture, setting the tone for what's to come.

First though, we get a crash course in family dynamics, a general disagreement about whom Kätchen (Noelle Viñas) will wed. Will it be the awkward, bookish Wilhelm (Grace Ng), whom she has set her heart on, or the bro-ish, boorish Robert (El Beh), favored by the family patriarch, Bertram (Steven Hess)? In an interesting bit of cross-casting, both of these young men are played by women who embrace their "maleness" in very different ways: El Beh with a dashing goatee and a jocular backslap, Grace Ng with the tumbling pratfalls and acrobatics of a vaudevillian patsy. Both embody the exaggerated physicality that is a Jackson hallmark, and both are the production's ablest singers, the high notes proving somewhat of a stumbling block for other performers, particularly Viñas, who tackles them gamely but frequently lands just shy of hitting the mark. However, her Kätchen is refreshingly no-nonsense despite the fact that the William Burroughs-penned dialogue cheats her of much of the play's poetry, but she gets her moments in where she can — a series of sarcastic asides in response to Robert's overbearing boasts, a mesmerizing midnight monologue, and a torch song complete with a follow spot and some flirty front-row interaction. Elizabeth Carter as her equally spirited mother, Anne, and Kevin Clarke as Old Uncle, a roguish carnival barker with a tight grip on his trusty megaphone, round out the able cast.

The poetry-infused book and clattering, underworldly soundtrack of The Black Rider is part of what makes it such a mutable canvas, and if Shotgun's production has a flaw, it's that it attempts to flesh out an exhaustive array of interpretations, without ever quite settling on an overarching through line. But this scattershot approach does emphasize at least one of the recurring themes — that of the unpredictable nature of the effects of our actions. When Wilhelm accepts his ration of magic bullets from Peg Leg, he is warned multiple times that he cannot predict where all will wind up, but the pressure on Wilhelm to learn to hunt is too great for him to consider any other alternative. Through him, and his enablers, the morality play at the core of The Black Rider unfurls apace — likening the growing violence onstage to that of a spiraling, uncontrollable addiction. "The more of them magics [bullets] you use, the more bad days you have without them ... time to stop chippying around, kid, you're hooked."

As a gathering cloud of foreboding looms over the protagonists' joy for their impending nuptials, anyone who's ever read a book by Burroughs, or at least a Grimm's fairytale, could rightly predict that this sprawling fable doesn't end well for our plucky lovers (or anyone). The heightened moodiness is greatly assisted by an attentive, sometimes startling, lighting design courtesy of Allen Willner — with spotlight operation by Brittany Foley and Lenny Adler — as well as by the versatile inventiveness of the band, which, in addition to playing Tom Waits' score provide essential, often humorous, sound effects to punctuate some of the more stylized, sometimes cartoonish antics of each performer. In the end, after each actor sings a different song simultaneously to the band's cacophonous strains and slips offstage through the coffin-shaped doorway that birthed them at the beginning, Peg Leg sings his coda — "The Last Rose of Summer," a final reminder, if you needed one, that winter is truly here. And while Jackson's winter feels especially fraught with uneasy tension, for those who enjoy dark productions, the Shotgun Players have got the show for you.