Senator Dianne Feinstein Is a 'DINO' on Marijuana, Extinction Looms

Time is not on her side: "DINO" Sen. Dianne Feinstein

"DINO" is political jargon, meaning "Democrat in name only," and it's the perfect term for US Senator Dianne Feinstein, who continues to parrot the die-hard drug warrior line with regard to marijuana law reform.

The Chronicle's Joe Garofoli writes Thursday that during the historic Senate Judiciary hearings on the conflict between federal and state pot law coming up this Tuesday, Feinstein will not be there representing the majority of Californians, even though 54 percent of state residents want to end the failed prohibition on pot.

Feinstein opposed Prop 19 in 2010 and even Proposition 215 in 1996, which legalized medicinal marijuana. 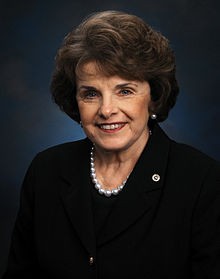 "California marijuana advocates doubt that their US senator on the Senate Judiciary Committee, Democrat Dianne Feinstein, will grill the DOJ official for clarity on the issue. ...”

“In written responses to questions from The Chronicle, Feinstein said she will be focused on illegal grow operations, particularly in Fresno County, at Tuesday's hearing.

"I will seek confirmation that DOJ's new guidance will not stop DEA or the Justice Department from investigating rogue medical marijuana dispensaries and illicit crop production in California," Feinstein said.

That statement might as well have been written by a sheriff's deputy in Butte County. She's more conservative on pot than former Republican presidential candidate John McCain.

We didn't expect much out of the chairwoman of the Senate Caucus on International Narcotics Control, who represents the demographic core of opposition to marijuana law reform — women over sixty.

But coupled with her appalling lack of government oversight as chair of the Select Committee on Intelligence since 2009 - amid spying scandal after spying scandal - it's time this type of DINO went extinct for good.