Seeing State Power Inside the Museum of Capitalism

The temporary museum in Oakland scrutinizes an economic system and its catalysts. 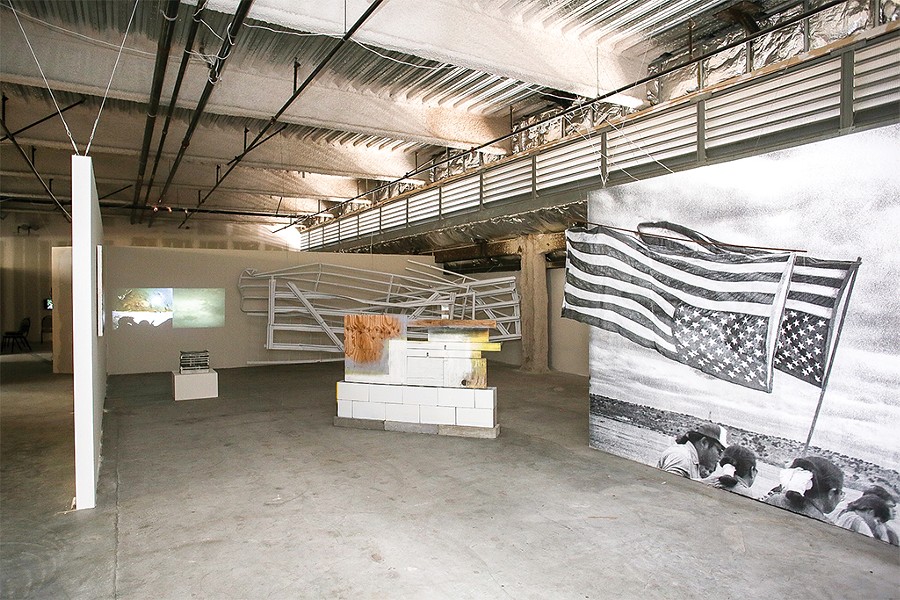 According to the curators who assembled Oakland’s recently-opened Museum of Capitalism, its mission is to examine the “ideology, history, and legacy” of our society’s economic system. Visitors might, therefore, expect a focus on subjects like money, markets, the corporation, and other private-sector phenomena. But surprisingly, and appropriately, there are as many references to the state and government inside this exhibition hall as there are to business.

It’s appropriate that the state is a central theme examined by most of the featured artists. After all, the power of states — through law, but also through the organized violence of war and policing — is integral to the rise and reproduction of capitalism as a totalizing societal system.

Without the state, there are no global markets for land, labor, and commodities. Without the cops and the military, there very well might not be private property, at least not the gilded fortunes we’re disturbingly accustomed to. The state measures and weighs the world for capital to divvy it up. And the state defines the limits of capitalism’s exploitation — providing laws as to what can be destroyed in the name of profit, and what’s ostensibly too sacred to reduce to an asset or liability on a balance sheet.

So really, this museum of capitalism is also a museum of government under capitalism. And its featured artists aren’t shy about gazing directly on capitalism’s most brutal and exploitative formations, from racist slavery to the neoliberal gig economy. Artists are, after all, a critical bunch, exploited and abused by everyone from the global corporate culture industry hype machine to dodgy local gallery owners.

One of the more interesting displays underscoring the symbiosis of the nation state and capital is Patricia Reed’s Pan-National Flag. A digital print of thin black lines on pale fabric, the image incorporates the symbolisms of the world’s many national flags. What results is a tangled circular knot that’s nearly opaque at the center. Somewhere in this blot is the sovereign identity of the national body politic, but tiny thin lines shoot out from the core. Perhaps the far-flung lines are immigrants, refugees, oppressed minorities, or stolen chattel slaves?

[The] featured artists aren’t shy about gazing directly on capitalism’s most brutal and exploitative formations, from racist slavery to the neoliberal gig economy. click to tweet
The clearest presentation of how capitalism relies on the labor of the marginalized to produce surpluses can be seen in Marisa Morán Jahn’s Careforce Prints, political posters meant to valorize the work of those who look after the sick and elderly, and raise children.

Of course, it would be unnecessary to praise caregivers were it not for the grinding hardships they face in a world obsessed with monetary value. Care work, even in a supposedly progressive state like California, is understood to be beyond the vulgar calculus of capitalism, but at the same time, it’s a highly commodified and exploited service deformed by the values of capitalism.

The profit motive’s influence on the medical arts is critiqued in one corner of the museum through a disturbingly large collection of pens branded with trademarked pharmaceutical monikers. Would all these drugs even be invented without the biotech companies and their state handmaidens to fund scientific research and development? Probably not. But then again, would we suffer so many ailments if we organized ourselves under a different system, ecosocialism say? Would there be erectile dysfunction in a post-capitalist world? Would the societal demands of a communist utopia require Ambien for millions to get a good night’s sleep?

In the back corner of the museum, in a dark room that almost feels hidden, there’s a circle of chairs that appear to be upholstered with recycled fair-trade coffee bean sacks. The chairs face an array of screens where visitors can sit, don headphones, and listen to theorists and activists explain visions of anarchism, feminism, and other radical alternatives around which society could be organized. The installation is part of Oliver Ressler’s ongoing “Alternative Economics, Alternative Societies” project.

But to reach this chamber of possibilities you have to walk past another room filled with fences, borders, and other means of enclosure, or through the boardroom of a global financial corporation — the kind of place where rounding errors or toxic derivatives cause millions of foreclosures and jobs losses. Both paths are almost like walking a gauntlet. Is the placement an accident?

It’s an aside, but another interesting thing about this museum is its location. The space has a one-story atrium, and you can look down where structural steel, wires, and pipes are exposed under the unfinished concrete floor. Owned by the Port of Oakland, this host building perfectly represents the combination of the state and capital in our day and age.

A department of the city government, the port is funded through flows of billions in global commodities. The port’s commercial buildings were intended to help the city spur business in its once industrial and half-empty Jack London District. Now private capital is clamoring to build condos in this gentrified corner of the East Bay.

The Museum of Capitalism is free. One wonders, how then are the artists and docents paid? Perhaps they live in run-down, fire trap warehouses nearby? Or perhaps they’ve been evicted to make way for the financiers, CEOs, and celebrities?

I jest, but that’s the world we live in.