Second 'Tuff Shed' Homeless Camp Opens in Oakland, but Some Criticize Closure of the Surrounding Encampment

This week, the City of Oakland is opening a second "Tuff Shed" camp at Northgate Avenue and 27th Street in Uptown, the site of what's thought to be the single largest homeless camp in the East Bay. But the plan also involves closing the existing self-organized homeless camp, which has occupied the surrounding area for years.

The new Tuff Shed site is part of what officials call an "ongoing pilot project" to assist the homeless with services and transitional housing while also addressing public health problems affecting residents of the sprawling encampments.

"Our Tuff Shed shelters are a quick and temporary fix, and they help prepare unsheltered residents for their next step into housing," Schaaf said yesterday.

On-site social workers will assist those who decide to move into the camp with a transition into temporary and permanent housing, acquiring legal ID, securing healthcare and income benefits, and seeking employment. The location is also staffed with security guards, and residents can lock up their belongings. 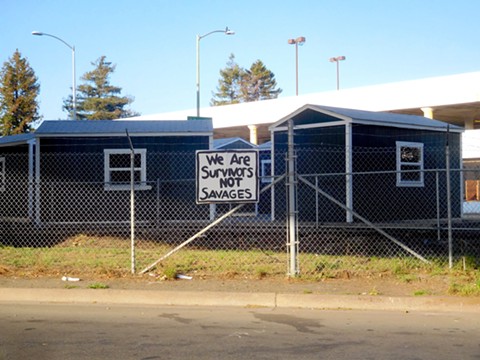 But some are critical of the way the city establishes and operates these camps.

On Tuesday morning, about two dozen people gathered outside the new Northgate Tuff Shed camp and argued with city staff about their plans to remove the entire surrounding camp in the coming weeks.

The Northgate camp is estimated to have as many as 100 residents, double the number who can be served by the Tuff Shed program. Those who can't fit into the Tuff Shed camp, or who choose not to move in, will have to leave the area. It's unclear where they will go, but they'll likely end up at other homeless camps nearby.

The Northgate camp has expanded over several years as an assemblage of tents and even makeshift wooden shacks along 27th Street, the curved stretch of Northgate that runs south from 27th to Sycamore, and along the Sycamore Street freeway underpass.

The camp has proven itself to be a dangerous location. In February, a man died when his makeshift wooden shack was engulfed by fire. Cars have careened off the road into tents before, too. Osha Neumann, a homeless rights advocate and attorney, questioned why the city has chosen to close an existing, self-organized camp to accommodate its own Tuff Shed program.

Neumann said that Oakland's homeless are highly stigmatized and discriminated against, but that the communities they build have value and provide residents with access to resources and safety. Breaking the camps up is harmful, he said, and unsheltered people should be respected and not pushed around.

"There are people on the street who for multiple reasons can't move into these very controlled environments," said Neumann. "There needs to be an understanding of that."

Neumann also criticized Operation Dignity, saying the organization, which is paid by the city to run the Tuff Shed camps, has imposed unnecessarily strict rules and in some cases has "provoked" homeless residents into confrontations.

"If you want people to move into an outdoor navigation center," said Neumann, "you have to provide them with time and space to do it without coercion, otherwise you create an oppositional atmosphere."

Several homeless residents of the camp told the Express today that they would not move into the Tuff Shed camp, and that they also do not intend to leave the existing Northgate camp. When asked what they will do if the city orders them to leave, they said they do not know.

But other homeless residents of the Northgate camp said they welcome the Tuff Shed site and say they hope to move into it.

Joe DeVries, an assistant city administrator who helps coordinate Oakland's homeless programs, defended the Tuff Shed pilot project and said that the 6th and Brush streets site has already helped move multiple people off the streets and into transitional housing.

DeVries also said the city carried out extensive outreach to the camp residents to explain the process and what resources are available.

"I honestly believe we are creating something better than what currently exists," said DeVries about the existing camp.

As of today, most of the Northgate camp isn't being made to leave.

Talia Rubin of the city's human services department said that the curbside immediately in front of the Tuff Shed camp was being cleared of several tents in order to provide access for a mobile shower truck to park there. The clearance will also permit city staff to extend electrical power into the city's new camp.

When asked, Rubin and DeVries both acknowledged that the entire surrounding camp will be forced to leave. DeVries said the removal of the camp will occur in "long phases."

Rubin said everyone will be offered services as the Northgate camp is cleared.
Prev
Next