Schaaf's Stance on Raiders Is Spot On

The mayor's steadfast refusal to hand over large public subsidies to the Raiders is not only the right move, but it also might give Oakland exactly what it wants.

A rendering of a proposed new Raiders stadium in LA.

Politicians often face intense pressure to award huge, taxpayer-funded handouts to wealthy sports team owners who threaten to move to a new city. And elected officials usually bow to such threats. Case in point: Politicians in St. Louis have promised $400 million in public subsidies to the billionaire owner of the St. Louis Rams to dissuade him from moving his team to Los Angeles, and public officials in San Diego are proposing $350 million in public subsidies to the rich owner of the San Diego Chargers so that he won't relocate his team to Carson, just outside of Los Angeles.

But Oakland and Alameda County officials, led by Oakland Mayor Libby Schaaf, have resisted succumbing to such pressure and instead have refused to open the public purse for Raiders' owner Mark Davis, who filed his official application on Monday to move his team to Southern California and share a new stadium with the Chargers. Schaaf and her colleagues deserve praise for their actions — not only because they're right to demand that large private companies finance their own facilities, but also because their hardline stance against what amounts to legally sanctioned extortion might just work.

Granted, Schaaf benefits from the fact that Davis appears to be holding a bad hand of cards. Among the three teams vying for the LA market, the Raiders likely have the worst chance of gaining approval from the National Football League. Why? Davis is the least wealthy of the three team owners involved and can't finance a new stadium without help. And he's not very popular within the league.

Although funding a new stadium in Los Angeles is easier than Oakland, largely because of the lucrative TV rights and corporate sponsorships available in the LA area, Davis faces one potentially insurmountable hurdle: The NFL is expected to require any team that moves to Los Angeles to pay the league a $500 million "relocation" fee. But Davis doesn't have that kind of money — as evidenced by his statements that he can't finance a $900 million new stadium in Oakland because of a $400 million funding shortfall.

Davis' odds of obtaining a waiver on the relocation fee also seem slim because he lacks league allies. He's not a member of the NFL's billionaire's club, and he's hampered by the fact that other team owners despised his late-father, Al Davis, for suing the league multiple times.

As such, it seems like a good bet the Raiders won't win the LA lottery at the NFL owners' meeting next week. And that would be good news for everyone involved — including the younger Davis.

The reason is that, despite reports to the contrary, Schaaf and her colleagues actually have a viable plan for the Raiders to build a new stadium in Oakland. No, it doesn't include public subsidies of the kind that St. Louis and San Diego are offering, but it could still work. "We're obviously ready and willing to sit down with the Raiders to discuss it further," the mayor said in an interview on Monday. 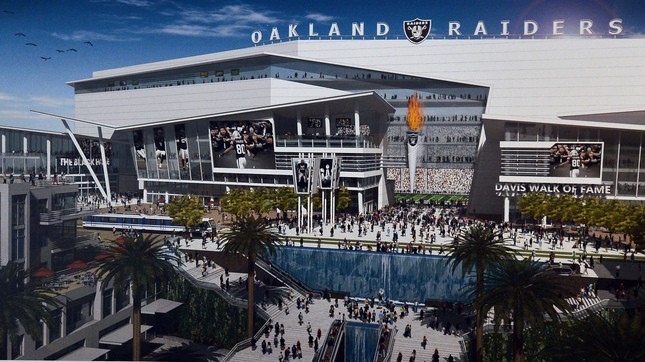 Under Schaaf's plan, the Raiders would lease about sixty acres of public property at the Coliseum site in a deal in which the team would agree to adequately compensate the public, plus provide "community benefits." Schaaf said the compensation is open to negotiation. But it could include credit for the Raiders' agreeing to use union labor, and perhaps building some affordable housing on site — if Davis decides to build housing.

For his part, Davis has complained that sixty acres is not large enough, because he wants lots of area for surface parking so that fans can tailgate before games. In fact, he has been demanding 169 acres of public property in and around the Coliseum because he claims that former Mayor Jean Quan once promised it to him. But there's no way Schaaf can give in to Davis' demands, because the city and county have a ten-year lease with the A's at the current Coliseum.

Moreover, sixty acres is plenty big. Schaaf's proposal would provide 8,000 parking spots, an amount that is close to the 9,500 the Coliseum has now, and there would still be property left over for both a new stadium and ancillary development, like housing, that could help finance it.

The mayor's plan would also set aside about sixty acres at the Coliseum for the A's to build a new ballpark (the Raiders would get the south side of the property and the A's would get the north). However, the Raiders could end up receiving all 120 acres if the A's decide to build closer to downtown.

Of course, that would be a win-win for all parties, especially if the A's select the old Howard Terminal spot at the Port of Oakland. The Raiders would then have all the space they need at the Coliseum for a privately financed mega-development, and the A's and Oakland would have a shiny new privately financed waterfront park that is about the same distance from downtown Oakland as the Giants' stadium is from downtown San Francisco.

It's a dream scenario, and it looks as if Schaaf's tough stance against the Raiders provides the best opportunity for it to actually come true.