Sacred harp singing is considered to be one of the oldest forms of American folk music. It dates back to the 1700s, to a choral style that developed in the churches of colonial New England, but eventually took root in the rural South. It’s a participatory tradition, which means that singers perform for themselves, not for an audience. Today, sacred harp is experiencing something of a renaissance, some even characterize it as the punk rock of choral music.

An increasing number of music lovers have been rediscovering this singing style across the country and abroad. In Berkeley, a sacred harp group formed eight years ago and is slowly attracting more and more members. 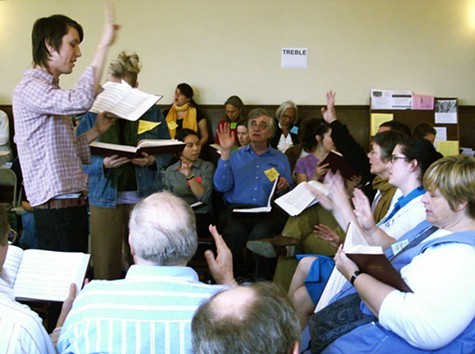 The group usually meets in Berkeley, but today there are about sixty people crammed in a small wooden room at the Potrero Hill Neighborhood House in San Francisco. They’re sitting around a hollow square where each side represents a voice in a four-part harmony: bass, tenor, alto and treble.

Hannah Blair is an artist from San Francisco. She says its hard to explain what sacred harp is.

“I have been working on a short explanation of this ever since I got this tattoo,” she says, pointing to the notes to a hymn called “Africa” on her left arm. It’s written in shape-notes, rectangles, diamonds and triangles “and realized the very next day that I was going to spend the rest of my life explaining what sacred harp is to people.”

To read more and hear the audio story, visit KALW.org.