Sacramento Mayor, former NBA star, and UC Berkeley standout Kevin Johnson was hit in the face with a pie on Thursday evening at a farm-to-table dinner event — then multiple sources say he tackled and assaulted the protester in a "bloody" brawl.

During the meal, a protester approached mayor and tagged him in the face with a store-bought coconut cream pie.

Stunned, the mayor allegedly tackled the protester and punched him "repeatedly," more than half a dozen times, landing "five to 10" blows, according to various witnesses.

One witness described it as a "bloody pulp." Other witnesses say that the pie-thrower was hit multiple times in the face and will definitely need stitches, and that there was visible blood. Ambulances and fire department arrived at the scene.

A day later, Sacramento Magazine published four photos from the incident, including the following:

The assailant was 32-year-old Sean Thompson, who was arrested on charges of felony assault of a public official and misdemeanor battery on school property. He's being held on $100,000 bail.

A spokesman with the Sacramento Police Department confirmed that there was “some sort of physical altercation” between the suspect and the mayor, which occurred at around 6:45 p.m. on Thursday.

“The mayor did strike the suspect after he was assaulted,” spokesman Sgt. Bryce Heinlein told the Express. He could not confirm whether Johnson tackled Thompson.

He said Thompson was transported to a local hospital for treatment after the incident. He was booked at midnight.

The spokesperson did not know whether the mayor was injured or not. Johnson was questioned after the incident.

From county jail, Thompson told a reporter with The Sacramento Bee on Thursday afternoon that Johnson "punched [him] in the face at least two times."

"I don't think that was an appropriate response to a pie to the face," he told the Bee.

The dinner was a celebration of Sacramento's Farm-to-Fork week, held at the Edible Garden at Johnson's alma mater, Sacramento High School, a charter school under the St. HOPE umbrella. Alice Waters of Chez Panisse has helped with projects at this garden in the past.

There were nearly 200 in attendance at the dinner, including a few dozen high-school students, according to sources. This event was also attended by some of the city's top restaurateurs.

Erika Bjork, who works for the Sacramento Republic FC soccer team, attended on behalf of the team and described the dinner was an "intimate" experience. She was seated near the mayor, who was chatting with guests at her table, when the incident occurred.

She described the attack on the mayor as "a shocking assault," and that Thompson did not announce himself before hitting Johnson in the face with the pie.

“Most of us didn’t didn’t even realize it was a pie until after, when I could see that there was a pie on the ground," she told the Express.  “There was no way, based on anything I saw, that this could be interpreted as a practical joke.”

She describe the mayor as "in shock" after he was hit.

Eventually, a security guard and an officer restrained Thompson, who remained handcuffed on the ground until police arrived.

After the pie attack, sources say Johnson was given a change of clothes and addressed the audience at a podium, apologizing, and receiving applause.

Johnson even brought UFC fighter Urijah Faber, who was in attendance, up to the podium and joked about the assault.

Faber later told a Sacramento TV station that the pie-thrower was "bloodied up" after the incident.

Protesters occasionally have dogged Johnson on the heels of sexual-misconduct allegations that resurfaced last year. He was booed at a Hillary Clinton event at Sacramento City College, for instance.

“He is home with his family. ... The whole thing is just shocking," she told the Bee. 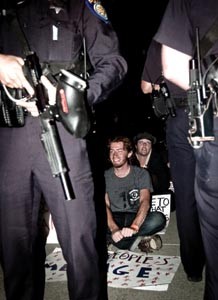 on early Thursday morning. The assailant has cuts, bruises and dried blood on his face — and sutures next to his left eye.

The mayor's office released a statement on Thursday morning, saying that Johnson "reacted in self-defense like most people do when attacked by an unknown object."

The "pie-thrower" has engaged Johnson in the past during city council meetings. In 2011, Thompson spoke at council and turned his back on Johnson. Tensions were apparently high at this meeting, and three SPD officers moved toward him — but Johnson waived them off.

Thompson's arraignment is scheduled for Friday, September 23, at 1:30 p.m.

There is precedent for convictions involving attacks on public officials with pie. In 1999, three protesters were convicted of battery for hitting then-S.F. Mayor Willie Brown with pies.