Guillermo del Toro and Sally Hawkins were made for each other. 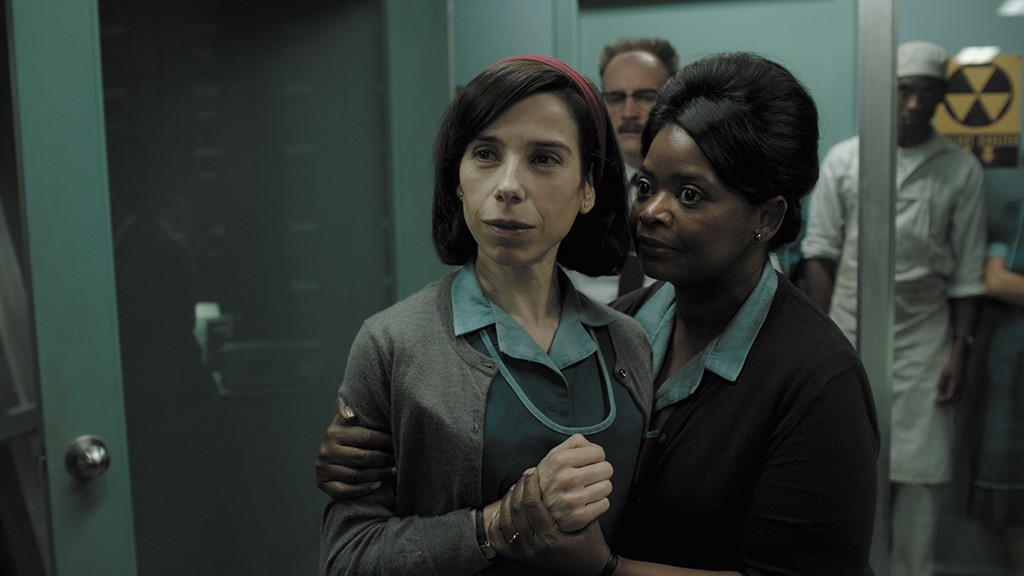 Guillermo del Toro's The Shape of Water, one of the very best movies of 2017, has the outlines of a classic fairytale. A meek scrubwoman, cowed by her bullying boss, comes to the aid of a monstrous-looking but sensitive creature who is being held captive and mistreated by the boss. The scrubwoman and the creature relate to each other and form a bond that can only be called fantastic.

But The Shape of Water runs deeper than that quick synopsis. Master storyteller del Toro, the Mexican-born international fantasy impresario who created Pan's Labyrinth and Crimson Peak, has more on his mind than the unlikely union of two oppressed beings. As written by del Toro and his collaborator, Vanessa Taylor, Elisa the office cleaner (Sally Hawkins) is the summation of every thwarted female romantic who ever existed, from Cinderella to Miss Kubelik in The Apartment. Everything about her, from her morning bath to her movie-postered apartment above a cinema, suggests a smothered spirit yearning to break free, a "princess without voice" stuck on the graveyard shift, swabbing the floors at a gothic-looking research lab in 1962, the height of the Cold War.

Inside the lab, a mysterious man-like amphibious creature from the Amazon (played by Doug Jones) is being subjected to merciless experiments by Strickland (Michael Shannon), a cruel, misogynistic businessman, on behalf of military officers whose main goal is weaponizing, not humanizing. Elisa and her fellow janitor Zelda (Octavia Spencer) merely clean up the mess that Strickland and his assistants leave behind. Elisa is at first repelled by the unnamed scaly amphibian, but soon discovers that he has feelings that are not so different from her own.

The more fanatical of del Toro's fans have already noted Amphibian Man's resemblance to Abe Sapien, the empathic do-gooder from the filmmaker's Hellboy franchise. In fact, both critters are portrayed by actor Jones. The film's publicity indicates, however, that del Toro did not intend the creature to be related to that earlier character — a tantalizing idea nonetheless. Visually, The Shape of Water echoes both Jack Arnold's The Creature from the Black Lagoon (1954) and Jean-Pierre Jeunet's manic 2001 romance Amélie. Thematically, the budding friendship between a love-starved woman and a misunderstood "monster" combines both those earlier films with Beauty and the Beast. But let's give credit where it's due. It's the actors who give Shape its shape, sculpted by del Toro's affinity for the underdog.

With his craggy face and commanding vocal delivery, Shannon is able to give even his most sympathetic characters a strong hint of menace. Strickland is particularly loathsome, whether dealing with the creature, his own passive wife (Lauren Lee Smith), or the buffoonish general (Nick Searcy). Compare and contrast him to Elisa's close friend Giles (Richard Jenkins), a gentle gay man slowly being left behind the times — Giles' poignant scene with the soda jerk and the key lime pie could justify its own sad movie. Then consider the scientist Hoffstetler (the ubiquitous Michael Stuhlbarg), with his divided loyalties.

Ever since Mike Leigh's Happy-Go-Lucky, audiences have been struck by Hawkins' plain-Jane-with-an-unpredictable-streak screen presence. Earlier this year, she starred as a variation on the willful wallflower persona: the arthritic, self-taught Canadian painter Maud Lewis, in Aisling Walsh's Maudie. Her Elisa broadens that dramatic character trait out to appropriately mythic proportions — the quiet woman with the other-worldly taste in lovers. The radiance she projects in the film's climactic moments lifts the story all the way up, from an eerie creature feature to an ecstatic burst of passion. That sort of epiphany is one of del Toro's trademarks. He and Hawkins were made for each other.


Editor's note: The original version of this story got wrong the name of the actor who plays Giles. His name is Richard Jenkins. This version has been corrected.