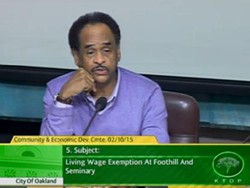 Last month, a controversial proposal to waive Oakland’s living wage requirements for a planned Walgreens store sparked a heated debate, and sowed confusion about who exactly was seeking the waiver. Was it Walgreens or the developer?

Critics of the waiver pointed out that Sunfield Development, the company in control of the project site where the Walgreens store is planned to open, has benefited from millions in subsidies, including a write down of the land’s value, and lucrative tax credits to finance construction. These subsidies, partly born by the City of Oakland, will benefit Walgreens in the form of a reduced lease price. For this reason the city’s living wage requirements were triggered for any employer with more than twenty employees leasing property on the site.

Sunfield Development pleaded, however, that Walgreens was demanding the waiver, and was threatening to pull out of the project, imperiling its completion, unless the city threw out the living wage requirement. But Walgreens told the Express that it was not seeking a waiver, and that it is not the company's policy to seek such exemptions from living wage ordinances.

Confusion ensued, and so while the City Council’s Community and Economic Development committee voted to waive the living wage requirement, the decision was later reversed, and it appears the project is moving ahead with jobs that will pay at least the $14.10 living wage, which is higher than Oakland's new $12.25 minimum wage.

But email records recently obtained by the Express show that several Walgreens executives were, in fact, demanding the waiver from the developer since at least 2011, and at one point last year the company's lawyers and real estate executives threatened to abandon the project unless the city threw out the living wage requirement.

On November 9, 2011, Sunfield Development’s president Sid Afshar wrote Walgreens Senior Real Estate Manager Todd Frank to inform him that Oakland’s Planning Commission had approved their project. Afshar inquired as to when the company would be willing to sit down and draft a lease agreement. Frank wrote back, “if there are living wage requirements you will not have a deal.”

According to Afshar's email, Gregory Hunter, who was the deputy director of Oakland’s Community and Economic Development Agency at the time, promised to obtain a living wage waiver for the project.

Frank wrote back saying that the living wage requirement would “kill it,” and that “exemption is key.”

The living wage issue then disappeared for almost three years until it resurfaced again in late 2014.

On September 26, 2014, Michael Redstone, the director of community and real estate law for Walgreens, emailed Jane Nelson, Sunfield Development’s lawyer, to say that Walgreens was “investigating the history of discussions between Walgreens and [Sunfield] regarding the living wage provision.” Redstone said that Walgreens considered Oakland’s Living Wage Ordinance an “unacceptable requirement.”

On October 14, Sunfield’s lawyer responded, saying that it was her understanding the city was granting and exemption to Walgreens. And according to emails sent in October by Rock Tang, a Walgreens real estate executive in charge of its Northern California stores, then Assistant City Adminstrator Arturo Sanchez worked with Walgreens to ensure the company’s request for an exemption would be brought to a vote by the City Council.

When asked about the emails, Walgreens officials now say that it's always been the company's policy to obey local living wage ordinances and not seek waivers."There was no change in our policy," wrote Jim Graham of Walgreens media relations in an email to the Express. "Our approach is not to seek to exempt our stores from wage ordinances. We regret that our employees did not understand at the time the request was initiated by them that seeking such an exemption would be contrary to that approach."

It's unclear whether Frank and Redstone are still employed by Walgreens.