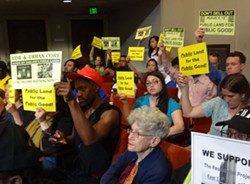 Late last night, the Oakland City Council finalized the sale of city-owned land to the developer UrbanCore for construction of a 300-plus-unit luxury apartment building near Lake Merritt. But the decision was made during a council meeting in which numerous members of the public complained about new rules — including a beefed up police and security force — that restricted public access.

The final decision, with Dan Kalb abstaining due to the potential illegality of the deal per California’s Surplus Land Act, and Rebecca Kaplan recusing herself from the vote, was hailed by the rest of the city council as a compromise that offers unprecedented levels of community benefits.

“$8 million is more than anybody thought we could get,” said Councilmember Desley Brooks shortly before the vote, referring to an offer made by the developer to provide an $8 million in-lieu fee to fund an affordable housing project offsite, in exchange for permission to build the luxury tower. According to the public comments of several councilmembers, the $8 million could be used to build approximately 80 affordable housing units priced for renters who earn between 30 and 60 percent of the area median income. This housing would be affordable to individuals making roughly $25,000 to $50,000 a year. “If we’re going to have more affordable units we need that $8 million,” said Brooks.

“At the end of the day the city will recognize close to $14 million in community benefits,” said Councilmember Abel Guillen, who worked with Brooks to broker the final deal with UrbanCore.

Eastlake United for Justice, the community group that led opposition to the land sale, turned out in force to block this latest proposal, but failed to sway the councilmembers. The community group said the $8 million promise was vague, and contingent on land being freed up for development, whereas the city is selling off land it currently controls, in apparent violation of state and city laws that prioritize affordable housing on public property.

“There was no real community engagement in this process,” said Dunya Alwan, an Eastlake resident, about the latest proposal. “Instead, it appears a new deal has been arranged behind closed doors and presented to us.”

Alwan said her neighbors have little trust in the council and the developer. “We don’t trust – and have reason not to trust – the process before us,” she said.

Michael Johnson of UrbanCore appeared before the council and praised the process, despite the lumps he and his company have taken along the way. “Processes like this have a way of improving community impacts,” he said. A field representative of the carpenters union, who declined to give his name, said the project could generate hundreds of jobs, and that many of their members are Oakland residents. “I think UrbanCore has been doing a lot to bridge the gap,” he said.

“We can’t keep approving these projects built by local workers that, once they’re finished, those same workers can’t afford to live here anymore,” said Alvina Wong of the Asian Pacific Environmental Network. Wong said the city can produce affordable housing for workers, thereby creating good jobs without gentrifying the neighborhoods and displacing longtime residents, many of who work in the building trades.


When the final vote was cast, some opponents of the land sale shouted “see you in court,” referring to a potential lawsuit that could still undo the deal.

The council’s hotly contested decision was also made during a meeting in which there were multiple complaints about accessibility. Numerous members of the public objected to new restrictions that the Interim City Administrator John Flores has implemented because they have prevented members of the public from participating in public meetings.

After the May 5 meeting of the city council was shut down by activists opposed to the pending sale of the East 12th Street Parcel, the Oakland City Administrator ordered the council chamber’s gallery seating closed, thereby eliminating more than one hundred seats.

The City Administrator also got the Oakland Police Department’s nine-officer Area 1 Crime Reduction Team (CRT) taken off Oakland’s streets in order to act as security guards inside the council chambers during meetings.

Furthermore, the side doors to the chamber were locked last night, closing off the only ADA-compliant points of access to the room. Dozens of people were forced to stand outside the chamber, or sit in other meetings rooms to watch a television broadcast of the meeting, even though there were seats in the main chamber.

Oakland resident Carole Fife came to speak about Councilmember Brooks’ proposed department of race and equity, but said she was chased by police officers after walking into City Hall and refusing to be searched. “I was accosted by – who is it? – the Crime Reduction Team? What kind of use of taxpayer dollars is this?” said Fife. “What is happening is not acceptable.”

At the council meeting held on June 2, members of the public and press were forced to sign their names before entering City Hall to gain access to the city council meeting, in addition to having bags searched, measures that have not been taken in previous years. The City Administrator also assigned a heavy police presence to the June 2 meeting, including the Area 1 Crime Reduction Team.

“They almost tried to arrest me coming in here because they were demanding to search my bag,” said Dan Siegel, an attorney and candidate for mayor in the last election. Siegel came to speak about the East 12th Street land sale, but had to leave before his chance to address the council, partly because the meeting ran past 11:00 pm.

“I asked them under what authority, but the finally let me come in,” said Siegel. He called the new restrictions on public access “ridiculous,” adding “it’s definitely chilling the public’s ability to participate.”

Ron Muhammad, an Oakland resident who came to speak about summer youth jobs programs, said he was physically grabbed by an Oakland city staff member and prevented from entering the council chambers. “I signed up to speak on the last issue, but couldn’t get inside,” he told the city councilmembers after the item had already been discussed and voted on. “There are all these open seats in here,” he said, pointing to the galleries, “and you won’t let people come in.”

At multiple points throughout the night, Oakland City Clerk LaTonda Simmons requested that the council delay voting on items in order to ensure that members of the public who signed up to speak on items were able to gain access to the chamber, saying the wait was necessary “to make sure we don’t violate anyone’s rights.”

Correction: The original version of this story stated that the new restrictions on public access and the assignment of police officers to City Hall was ordered by Oakland City Council President Lynette Gibson McElhaney. This was incorrect. According to Citywide Communications Director Karen Boyd, the new City Hall security measures were ordered by the City Administrator's office in consultation with the Department of Public Works, which manages City Hall, and the Oakland Police Department.