Requiem for a Drummer 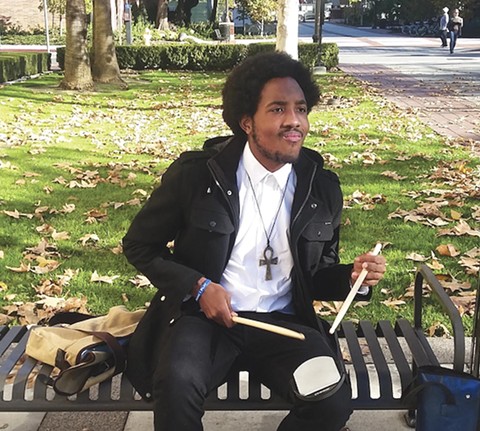 On and off the bandstand, Oakland drummer Victor McElhaney made a powerful impression. In the hours following the news that he had been shot and killed on March 10 during an apparent robbery near the University of Southern California, where he was a senior at the Thornton School of Music, social media filled with anguished disbelief and loving tributes to a young man who seemed to shine in every setting.

The legendary drummer Peter Erskine, who taught McElhaney at Thornton for the past year, made it clear that the young drummer was poised to make important contributions as both a player and a person. "He had the touch, the feel, and the musical understanding of a seasoned jazz musician," Erskine said.

Before McElhaney headed south, he was part of a particularly strong edition of the Cal State East Bay jazz band, which is reuniting on Tuesday for a concert in his honor at the CSUEB University Theater in Hayward. Among the players returning to town for the concert is trombonist Mitch Butler, a family friend and McElhaney mentor who's a professor at the University of Missouri Kansas City Conservatory of Music and Dance.

"Almost every person is coming back for the event," says tenor saxophonist/composer and the CSUEB jazz band director Dann Zinn, who still sounds incredulous over McElhaney senseless death. "You've got this guy who's really talented. He's still a kid, but really good, a lot of energy and chops, always bringing it. A super nice guy, sweet and funny and really bright as well, super interested in lots of stuff. And he walks into a robbery? There's no way to understand it. He's just the best guy. It's an impossible thing."

The CSUEB band was so strong during McElhaney's tenure that Zinn brought the group into Fantasy Studios for a recording session that resulted in six tracks. The music was never released due to academic politics, but the music department has now signed off on a CD, which is in the process of being mixed and mastered. The session prominently features McElhaney's drumming.

By all accounts, the McElhaney family supported and celebrated Victor's exuberant talent from the start. At a press conference in Los Angeles two days after her son's murder, Oakland City Councilwoman Lynette Gibson McElhaney described Victor as a "born drummer" with a preternatural musical gift. It wasn't just that he was drumming long before he could walk or talk. It was his old-soul knowledge that music can be a vehicle for revelatory self-expression. At just three years of age, his mother recalled him saying, "First you feel it, then you play it."

The outpouring of grief following McElhaney's death came from every institution he moved through, and he took full advantage of the East Bay's numerous educational opportunities. At the age of 11, he started studying at the Oakland Public Conservatory of Music, where he returned as a teenager to mentor younger students and teach the African Roots of Drumming class. He followed a similar path at the East Bay Center for the Performing Arts in Richmond, studying African drumming and quickly mastering the coursework. "He would get bored and start teaching the other kids so the whole class would progress," his teacher Kwesi Anku told Richmond Pulse.

Fascinated by jazz and hip-hop, he pursued both disciplines at the Oakland School for the Arts. By the time he arrived at CSUEB, he was an accomplished drummer, but still had plenty to learn. His teacher, the esteemed drummer Alan Hall, found that McElhaney was eminently teachable.

"You get students who come in who are great players already and it can go one of two ways," Hall says. "Who are you to teach me anything? Some students can't handle being told you need to work on this. Go slower. Do it again. Or they can understand that they can do many things, but there are some holes there. Victor was open to all of that. It became a great situation. I respected him and he respected me."

At Tuesday's concert, Hall will be taking over the drum chair for his former student. The news of McElhaney's death left him shaken and contemplating what might have been. "I was scanning something online and saw that a USC student had been killed," Hall said. "I have a couple students there and thought it couldn't be, but let me check. Then, nooooooo! Victor was really something. I had him for two years. You carry hopes and dreams of students with you. Not all of them. But some of them really stick in your mind."