A fiery tenant-landlord debate continues on the island. 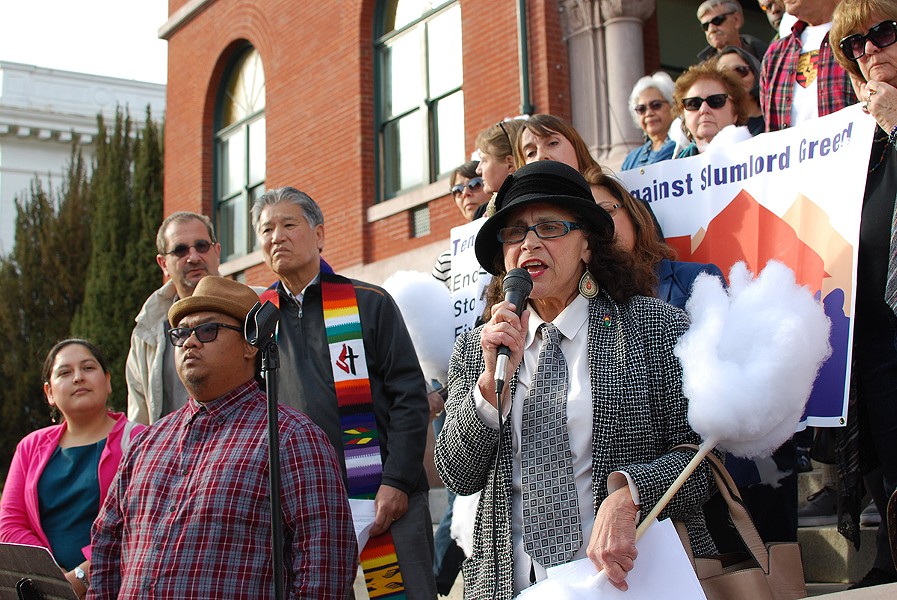 Maria Dominguez is an organizer with the Alameda Renters Coalition, a group that works to protect tenant rights, but when her own landlord texted her last month that he was evicting her, even she didn’t know what to do. She was pretty sure her landlord didn’t follow the legal procedure, according to the city of Alameda’s rent-control ordinance which was approved in March of last year. But she had no idea how to challenge it.

“It’s been very eye-opening to go through the process myself, as an advocate for renters, especially when the process is broken,” Dominguez said outside last week’s Alameda City Council meeting, where officials discussed the city’s first annual report on the effects of the new ordinance.

Organizers like Dominguez say that continued rent hikes and threats of eviction are tearing apart the fabric of the small island community, where more than half of the residents are renters. “When the City Council says that we all belong here, we have to hold them accountable,” she said.

Debates over tenants’ rights have rocked Alameda in recent years. ARC members and other activists say the city’s version of “rent control” is rife with loopholes and allows landlords to get around even the most basic eviction protections. They also argue that most tenants don’t even know they have recourse to challenge rent hikes, and that the process is unclear and intimidating.

Tenants’ groups placed a progressive renter-protections initiative, Measure M, on the November ballot, but it failed due to an opposition campaign paid for by landlord groups. Months later, though, they still argue that the city’s ordinance, which was approved by voters as Measure L, is not working.

“The City Council I think got it right. [Officials] struck a balance,” said Greg McConnell, a consultant from Danville representing the landlord advocacy group the Alameda Housing Providers Association. “It’s not always easy to know if you’ve done the right thing, but, in [this] case, it is easy,” he said, pointing to the margin by which voters approved the city’s ordinance — 55 to 44 percent.

But not every landlord agrees. Alameda Unified School District Board of Education Vice President Gray Harris, who is also a rental-property owner, recalled her 10 years teaching in the district and said if she still had to rely on her old teacher’s pay, she could no longer afford to live in the Bay Area. “In order to attract and retain good teachers here, we have to build them a place to live,” she argued.

So far, what little data there is offers limited, if any, insight into the efficacy of Alameda’s rent policies. Statistics do suggest, however, that rent increases might be trending downward on the island — but still outpacing the region at large.

For instance, a report commissioned by the city found that, from the third quarter of 2015 to the same period in 2016, average rents for properties with more than 50 units went up 7.9 percent. In the four years prior, rents had gone up an average of 13 percent per year, suggesting that the ordinance may at least be slowing the city’s rental price increases. Data was unavailable for smaller properties.

But regional data suggests the rental market has slowed more dramatically. In fact, multiple analyses by real-estate firms have found rents are falling in the Bay Area, including data from the Axiometrics research firm showing that rents in Oakland, San Francisco, and San Jose declined from September 2015 to September 2016. Alameda’s data suggests that the city’s rents continued to rise substantially over that period.

The city has collected some of its own statistics on rent increases since the ordinance took effect, but the numbers only track the cases referred to the Rent Review Advisory Committee, or RRAC, a panel that resolves landlord-tenant disputes. Under the ordinance, landlords must report any rent increase above 5 percent to the committee. Tenants can request a hearing to argue against a greater than 5 percent increase.

A total of 456 rent increases have been reported to the committee since the ordinance took effect, with 434 of those above 5 percent. Only 22 tenants challenged an increase at RRAC, which renters’ advocates argue is because tenants don’t understand the process and are intimidated by the prospect of confronting their landlord at a public hearing. Also, the committee’s decisions are ultimately non-binding.

Many tenants argue that even a 5 percent rent increase is not achievable for low-income tenants with stagnant wages, particularly if they persist annually.

Megan, an Alameda resident who did not provide her last name because she is facing a no-cause eviction, said that she has received rent increases of five, five, and 8 percent in the three years she’s lived in her apartment. Her wages as a community mental health worker only go up 3 percent per year, she said.

“I love Alameda, but it’s no longer a place I feel secure putting down roots,” she said. “There’s a growing regional consensus around just cause and rent control, and we’re asking our City Council to listen up.”

Activists argue that Alameda’s renter protections lag far behind neighboring cities like San Francisco, Oakland, and Berkeley. However, as the housing crunch radiates out from urban centers, and rents spike throughout the region, there has been a growing movement to add new protections in more suburban Bay Area communities.

Most rent-control measures cap annual rent increases at 100 percent of the Consumer Price Index — typically around 2 or 3 percent per year — but within limitations, such as the state’s Costa-Hawkins act, which prohibits rent control on buildings constructed after 1995. Eviction protections frequently also guard tenants from “no cause” evictions, making the landlord prove some violation by the tenant, such as damaging the property or failing to pay rent. Landlords also can evict tenants in the case of an owner moving in, or to take the unit off the rental market using the Ellis Act. But some cities require the landlord to assist with relocation fees in those cases.

Alameda still allows for no-cause evictions, but puts a cap on how many tenants a landlord can evict each year, and requires relocation assistance. It also mandates that landlords pay relocation fees for if they evict a tenant using the Ellis Act.

According to city data, there were 97 eviction notices requiring relocation assistance since the ordinance took effect, including 35 no-cause.

But the council may yet prohibit no-cause evictions. Late in Tuesday’s meeting, two councilmembers, Marilyn Ashcraft and Malia Vella, expressed support for ending no-cause evictions entirely. With Mayor Trish Spencer and Councilmember Frank Matarrese hesitant to make any substantive changes so soon after the election, the deciding vote will likely come down to Councilmember Jim Oddie, district director for state Assemblymember Rob Bonta, a strong proponent of increased tenant protections.

Oddie said that he is open to considering stricter eviction protections if the issue is studied and analyzed appropriately. But he also pointed out that, given the choice between competing ballot measures — one maintaining the city’s existing ordinance and the other sponsored by tenant advocates — Alameda voters overwhelmingly chose the city’s ordinance. While the tenants’ measure would have prohibited no-cause evictions, it was a particularly progressive package of protections, including rent control that capped hikes at 65 percent of the Consumer Price Index, more restrictive than even Oakland or San Francisco.

When the council reconvened to continue the meeting on Friday, Oddie directed further study of the city’s no-cause evictions. The council will take up the issue again in May.

Oddie said he discovered that most of the no-cause evictions since the ordinance took effect were of long-term tenants who had lived there four years or more. “Not all landlords are devils, not all tenants are angels, but again I stand on the side of tenants,” Oddie said at the meeting.

In the meantime, the council is working on closing loopholes created by the ordinance, including landlords avoiding paying relocation assistance by only offering short fixed-term leases, an exploit that the city says they’ve already seen in a few cases.