These Female Skateboarders Are Changing the Sport for the Better

In the male-dominated sport, female skaters in the Bay Area and beyond are creating their own cultures, challenging stereotypes, and inspiring others along the way.

Bert Johnson Minna Stess recently became the youngest person to ever drop in on the Woodward West 27-foot MegaRamp. 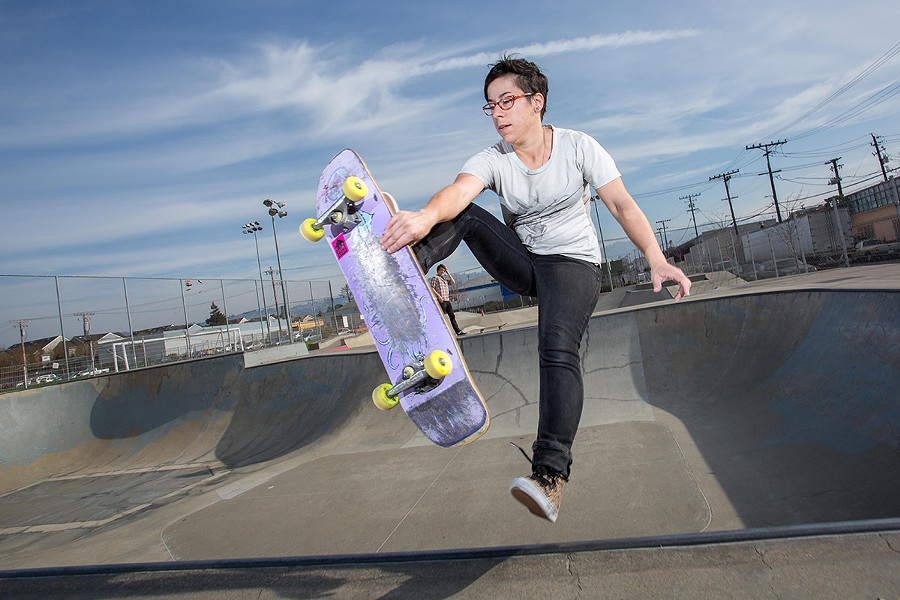 Bert Johnson SLAG's Marie Baeta has worked with hundreds of girls over the years, and helped foster a distinct, vibrant community of female skaters.

Bert Johnson Despite some obstacles, Alisaah Yu is unabashed about her love of the sport.

Bert Johnson Elissa Steamer is one of the most accomplished (and modest) street skaters around. She was the first female skateboarder to earn endorsements that were once given solely to men.

Bert Johnson Skate Like a Girl shredder Kathryn Sy makes kickflips look like a walk in the park.

In 2013, Minna Stess became the first girl to win the California Amateur Skateboard League (CASL) series in its thirty-plus-year history. She has also won first place in the NorCal competition for street skateboarding, and second place in CASL's State Championships.

In 2014, Stess made history again at the national King of the Groms contest in Minneapolis by becoming the first girl to win an event (beginner mini ramp), to win an ATV award (all terrain vehicle/best all around), to make the finals in three events (street, mini ramp, bowl), and to make the top five in street skating. And this year, she placed third in the Vans Girls Combi Pool Classic (a World Cup Skateboarding event). She has multiple sponsors — including BrokinBonz Clothing, Lakai Limited Footwear, Theeve Trucks, Silly Girl Skateboards, Sonoma Old School SkateShop, and Girl Is Not A 4 Letter Word, a brand by one of the original pro girl skaters, Cindy Whitehead — plus thousands of Instagram, Twitter, and Facebook fans.

And she is one of the many impressive young (and less young) women in the Bay Area who are changing the sport of skateboarding for the better, and inspiring countless others along the way.

For more amazing photos of female skaters, check out our slideshow by Bert Johnson.

Indeed, a lot has changed for women in action sports in the last ten years — both culturally and systemically. This is due, in large part, to the efforts of a handful of trailblazing female skaters and entrepreneurs who, instead of waiting for the sports industry to change, decided to take matters into their own hands and create their own brands, networks, and outlets to gain visibility.

Mimi Knoop and Cara-Beth Burnside, also Californians and multi-time X Games winners, founded Hoopla, an all-female skateboarding company, as well as the Action Sports Alliance, which they co-founded with Drew Mearns. The Alliance was integral in the effort to secure equal prize money for male and female X Games winners in 2008.

Lisa Whitaker, who lives in Norwalk, California, founded the Girls Skate Network, and started a popular YouTube channel under the same name. She also launched Meow Skateboards, and has helped increase awareness, exposure, and just plain awe of female skateboarders the world over.

Girls Riders Organization is a nonprofit that's educating and inspiring young skaters, and frequently has skate sessions in Fremont, in addition to Los Angeles and New York City.

And Skate Like a Girl (SLAG), which started in Seattle, has been a driving force behind the movement. SLAG has chapters all over the United States, and holds a monthly "skate date" in Berkeley's Skate Park, as well as events and clinics in San Francisco. 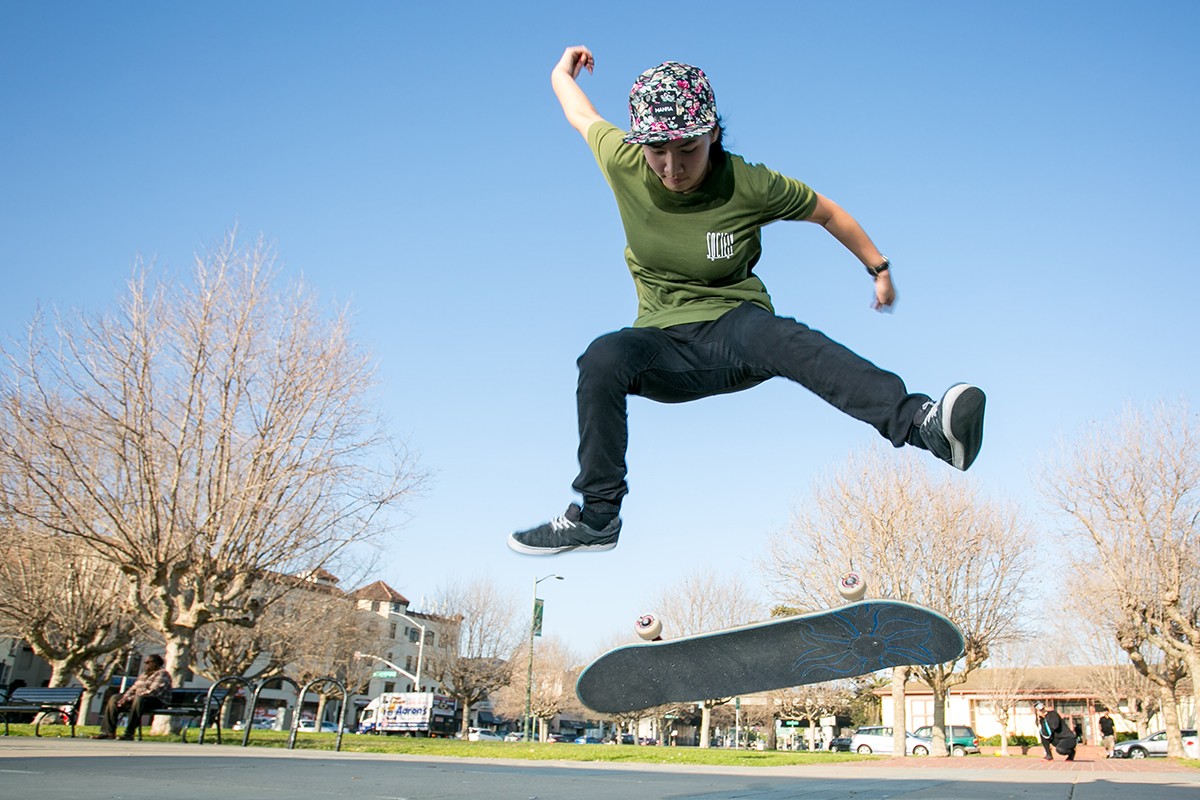 And that's just a small sliver.

As a recent Forbes article noted, "If you ask industry insiders about the future of women's skateboarding, they will tell you that interest levels have shot up. It is the fastest growing demographic in action sports, and younger girls are starting to skate."

A 2013 documentary by pro skater Amelia Brodka, Underexposed, was another pivotal marker for the growth of female skate culture and prominence. Underexposed explored the progression of today's female skateboarders from all over the world through interviews from top action sports players and marketing professionals. Brodka also created the only all-female pro/amateur vert (ramp skating) and bowl contest, called Exposure, after the title of her documentary.

"It has really taken off," said Moniz Stess, mother of eight-year-old Minna, referring to Exposure. "It has grown into a huge event in just a few years!"

As for Minna, she recently made history again when she became the youngest skater ever to drop in on the monolithic 27-foot-tall MegaRamp at Woodward West in Tehachapi, California. "I was scared dropping in, but I wanted to do it," she said in an interview, referring to the trick in which a skateboarder starts skating a ramp or bowl by dropping into it from the top instead of starting from the bottom and building momentum that way.

Minna lives in Petaluma with her parents and older brother Finnley, who is one of her inspirations for skating, along with female skaters such as Arianna Carmona, Alana Smith, Lacey Baker, Julz Lynn, Samarria Brevard, Leticia Bufoni, and Nora Vasconcellos. "My dad told me he thought I could do it if I wanted to, so he said, 'Go ahead and try it. ..."  I was nervous, but I really really wanted to do it. So I did. It was really fun! I love to feel like I'm flying."

Moniz Stess and her husband Andrew are avid supporters of their daughter's talent, and the sport in general. "I think skateboarding is growing quickly and the skaters are starting younger and they are doing things on a board that most skaters who are in their teens and twenties and older now weren't doing at, say, seven," Moniz said. "I think it has a lot to do with parents being more willing to support skateboarding instead of looking at it as some sort of hoodlum activity."

Though often relegated to the sidelines, women have been active participants in skateboarding since the subculture's hesitant beginnings in the 1950s, when a "skateboard" was roller skate wheels fastened to a wooden board. In fact, one of the first prominent female skaters in the 1960s, Laura Turner, hailed from Berkeley.