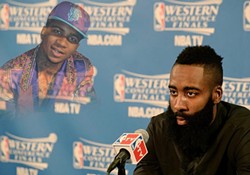 East Bay basketball fans have been celebrating the Golden State Warriors' victory over the Houston Rockets since this past Wednesday. And as the team prepares to enter the NBA Finals, their successful season appears to have been aided by the supernatural. Local rapper Lil B seems to have intervened in the playoffs by placing a curse on one of the Rockets' star players, James Harden, for allegedly ripping off one of his well-known dance moves.

To give some background, Lil B is an unsigned rapper from Berkeley who has a cult-like following of fans who worship him as the BasedGod. The artist alleges that Harden lifted his celebratory dance moves from Lil B's cooking dance, which has been well-documented on YouTube since at least 2010. While cooking has been a trend in the Bay Area for years because of Lil B's local renown, some high-profile professional athletes have recently begun to insert similar moves into their victory dances.

James Harden's victory dance in particular has obvious similarities to cooking. And because the player has not publicly acknowledged the inspiration behind his moves, Lil B declared on Twitter almost two weeks ago that he has put a curse on Harden. Coincidentally (or not), Harden's performance noticeably declined since that fateful day. While this is not Lil B's first NBA curse (he also jinxed Kevin Durant for insulting his music), these events have taken hold of the sports journalism world, and mainstream outlets like CBS Sports and ESPN have been documenting the saga.

"I'm sorry James Harden, all you had to do was explain you were doing the Lil B cooking dance," said Lil B on Twitter the night the Rockets lost Game 5 of the Western Conference. Lil B, who is a Warriors fan, was in attendance at the turning-point game, as well as rappers Kanye West and Mistah F.A.B. Still, Harden has not responded to Lil B's demands, and the beef continues to spawn dozens of memes from Lil B and Warriors fans alike. Furthermore, the rapper has hinted that Lebron James may be the next player to cross the BasedGod if he continues using the cooking dance without crediting its originator. While having supernatural powers is part of Lil B's fictionalized persona, the two players he has cursed so far have seen their game suffer considerably, so Lil B's threats, however bizarre, have kept the NBA on its toes.