Next Tuesday night, ramen won't be on the menu at Ramen Shop (via Facebook).

If you’ve read anything at all about Oakland’s Ramen Shop (5812 College Ave.), you’ve almost certainly heard about how the three Chez Panisse alums who run the wildly popular ramen-ya first found inspiration from time they spent in Japan — how one of them, Jerry Jaksich, trained under a ramen master in Sapporo, and how the trio scoured the alleyways of Hokkaido and Tokyo in search of that elusive perfect bowl.

Now, Jaksich, Rayneil De Guzman, and Sam White want to give their restaurant’s cooks that same opportunity — to travel to Japan, to experience the country’s rich food culture at the source, and to allow all of the flavors and techniques they encounter to inform their cooking once they get back to Ramen Shop.

Toward that end, the restaurant is hosting a special “Ramen Shop Goes to Japan” pop-up event on Tuesday, August 20, from 7:30 p.m. to 11:30 p.m. A $50 ticket (available online until they sell out) buys you all the Japanese street food you can eat and all the beer, wine, and punch you can drink. All profits from the pop-up will go toward plane tickets to Japan. 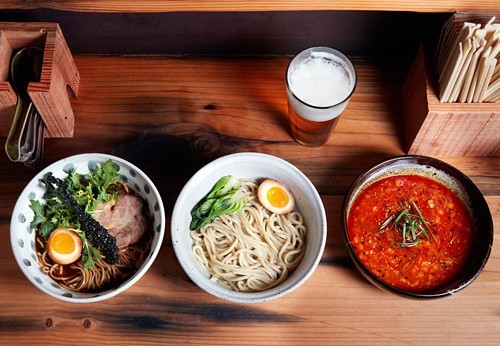 “The whole thing is for some of the younger folks who work here and really want to go to Japan, but can’t likely afford it,” White explained.

According to White, the format of the pop-up will be somewhat akin to a cocktail party, with different stations set up throughout the restaurant. Two of the restaurant’s young cooks, John Lee and Marlee Belmonte, will put together most of the street-food-inspired menu, which will include onigiri (rice balls), yakisoba (pan-fried noodles) made using the restaurant’s house-made ramen noodles, and a version of takoyaki (grilled octopus balls) made with local Monterey Bay squid.

A couple of notable local chefs are also volunteering their time to contribute to the effort. B-Dama chef Chikara Ono is collaborating with Lee and Belmonte on a sushi dish, and Jack Lin, one of the cooks at Hopscotch, will make gyoza.

If the fundraiser is a success, White said the plan is for members of the Ramen Shop staff to fly out to Japan sometime toward the end of October, during which time the restaurant will probably close for a few days.