ART
Noticed those new white lights on the Bay Bridge? It's an art installation called The Bay Lights, which is currently being tested before it goes live in March. When it's completed, 25,000 white LEDs will cover the north face of the bridge and glow in rhythmic sequences created by artist Leo Villareal on his laptop. Villareal talks about the project at SFMOMA on Thursday, Feb. 7 at 7 p.m., after the Atrium happy hour. Pre-sales are sold-out, but rush tickets should be available at the door. Check here for more details. — Whitney Phaneuf 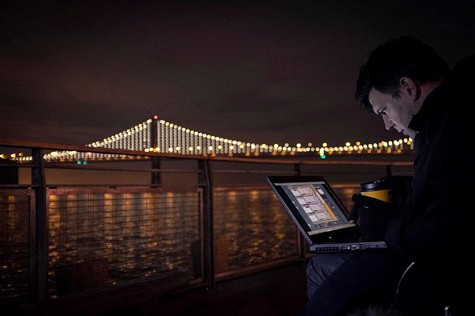 MOVIES
Looks like Ashton Kutcher is suffering some health complications as a result of the strict fruitarian diet he was following to get into his upcoming role as Steve Jobs. Need I say more? — Azeen Ghorayshi

MUSIC
Did ya hear about Courtney Love covering “99 Problems”? Aside from the awkwardness of Love covering a Jay-Z song (let’s just say she doesn’t censor the more racially tinged profanities), this totally novel rendition performed during Sundance reminds us that as crazy as the former Hole frontwoman is, she’s still kinda fabulous. — Lenika Cruz

Just in case it wasn’t bracingly obvious from my review, I reaaally liked the new Tegan and Sara album. But what I didn’t mention is that the video for the album’s first single and standout track, “Closer,” is also great: A nostalgic (but not like, cloyingly nostalgic) tangle of high-school style scenes (bedroom karaoke, spin the bottle, etc.) that perfectly captures the sort of wobbly-legged giddiness that makes this band so compelling. It also happens to be chock-full of attractive people making out. — Ellen Cushing

I'm probably biased 'cause they're my buddies, but I'll definitely be at Trails and Ways' New Parish show and you should be, too. This band has just gotten better and better in the last couple years; this show is definitely one of those catch-'em-now-before-they-blow-up kinda deals. — E.C.

FOOD
Someone graced us with this delicious blood orange tart at a dinner party last week; safe to say, everyone was drunkenly singing its praises for about an hour longer than should ever be spent talking about a single food item. It is, however, that good. EXPERT HINT: drizzle with hot caramel. FIN. — A.G.

You'll see this too late for the Superbowl, but FWIW I love this chili recipe. It turns out the secret is to use ground bison and to make your own chili powder from scratch — the results are brilliant. The only downside is that the recipe doesn't tell you how toasting dried chiles on the stovetop might fill your entire apartment with crazy-spicy, cough-inducing smoke that won't fully dissipate for several hours. Open your windows! Also, there's no better place to procure said dried chiles than at Oaktown Spice Shop. — L.T.

I am not a dessert person. (Unless said “dessert” is savory and covered in salt and is actually nachos. Then I’m a dessert person.) HOWEVER, I recently tried Bay Wolf’s apple-cranberry cobbler against my will (i.e., as part of a prix-fixe, wherein desire to get a good deal always trumps desire to not eat things you don’t like eating) and HOLY FUCK WAS IT GOOD: tart and sweet (but not aggressively so) and well-spiced, with a crunchy, oaty topping that stood up admirably to the scoop of ice cream resting on top of it. Seriously, y’all, it’s enough to make anyone a dessert person. — E.C.