As California transitions away from mass incarceration, a notorious private prison company has landed a multimillion-dollar state contract to provide inmate reentry services. 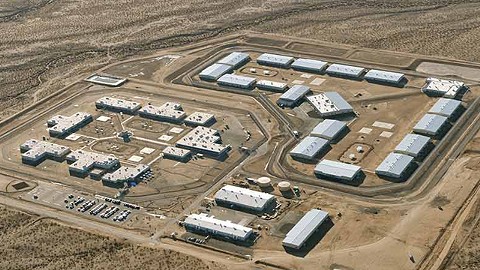 Dressed in a baggy blue dress shirt and with a confident voice, William Duncan described the role the Contra Costa Day Reporting Center has played in his life. At the time, he was 60 days into the center's mandatory reentry program, after serving five years in state prison. "You can't move further on if you're not thinking correctly," he said during the Richmond center's open house event last fall, referring to what his instructors had taught him. "That's the first thing to do: to learn how to think correctly."

Run by GEO Reentry in partnership with the California Department of Corrections and Rehabilitation (CDCR), the day reporting center opened last summer on Broadway in downtown Richmond. A couple months into its operations, the center opened its doors and hosted lunch for its visitors. Blue balloons decorated its entrance and staff members stood in each room, answering questions from county and community stakeholders.

While eating a sandwich and speaking with visitors, Duncan sat in a room with the words "Triumph" and "Persevere" emblazoned on the walls. It's the same room where parolees designated as "high risk" by the CDCR meet each day for group classes, covering a variety of topics, such as anger management and substance abuse.

The classes are part of a CDCR-mandated program, which aims to help people on parole transition back into the community. The center's staffers say the programming is modeled on evidence-based practices and is proven to reduce recidivism by focusing on participants' "criminogenic behavior," or influences that can lead an individual to re-offend.

"They teach you how to manage criminal ways of thinking," explained Duncan. "You don't realize that mind state is where you're sick and that it's a type of an addiction, whether it's street crime or drugs. Once you identify it and accept it, you can change it."

At the day reporting center, each participant is required to take cognitive behavioral classes, "because they did something that had faulty thinking to get them into the position they're in," said Amanda Owens, GEO Reentry area manager.

She believes the center's presence is a plus for Contra Costa County because it shows that the state is investing in reentry resources for ex-inmates. "It's a privilege. It's an opportunity. And we, as community members, should be grateful for that," Owens said.

But not everyone agrees. Some community members and criminal justice advocates are wary of the new center, while others are angry about it. Rebecca Brown, founding director of Reentry Solutions Group, a nonprofit that advocates for criminal justice reform in Contra Costa County, views GEO Reentry's arrival as a dangerous development.

That's because GEO Reentry Services is a division of one of the world's largest private prison companies: GEO Group. The for-profit corporation has a record of allegedly mistreating inmates and is the largest provider of community corrections and electronic monitoring in the country. Its chief source of revenue comes from its partnership with Immigration and Customs Enforcement (ICE) to run detention facilities of undocumented immigrants.

Brown noted that GEO Group has been targeting a new market — people recently out of custody — and that the company is adding new revenue streams to its prison-industry portfolio. The company also stands to profit handsomely from the reentry business as states like California transition away from mass incarceration. "I'm concerned we have a growth industry that works its way into our community under the guise of a 'continuum of care,' when, in fact, it's another element of the prison system now operating on Broadway," Brown said.

"Mass supervision is not freedom," said Katcher, referring to GEO Reentry Services' intensive programming. "Being mandated to go to a day reporting center where you have to meet with people who are a part of a corporation and corrections at the same time is not the same as meeting with a community-based nonprofit organization that gives you hope and dignity and says, 'We believe in you.'"

"I'm concerned we have a growth industry that works its way into our community under the guise of a 'continuum of care,' when, in fact, it's another element of the prison system." tweet this

Reentry advocates also object to GEO's approach to treating formerly incarcerated people. They say that, rather than teaching ex-inmates to "think correctly," the most effective way to help people reenter society is to give them the tools to be self-sufficient.

Advocates are also concerned that GEO Group, as a for-profit company, has an economic incentive to keep people in its reentry programs for longer than necessary, because the state pays on a per-person, per-diem basis. Advocates like Katcher and Brown also believe that a huge corporation like GEO Group is not philosophically qualified or equipped to execute reentry services successfully.

The CDCR, though, believes otherwise. The Contra Costa Day Reporting Center is one of seven new day-reporting centers that opened across California last summer, under a multi-year contract between the CDCR and GEO Group. It includes another Bay Area location in Solano County.

In recent years, negative press and wrongful death lawsuits, including accusations of insufficient medical care and poor living conditions, have dogged GEO Group, most notably with its immigration detention facilities. Yet the company keeps growing; it recently announced a new contract with ICE for 780 beds in Georgia, which is expected to generate about $21 million for GEO.

GEO's new day reporting center contract in California comes on the heels of far-reaching reforms of the state's criminal justice system. In response to the surging costs of mass incarceration, federal court decisions on prison overcrowding, and widespread calls for reform, the state has recently sought to "decarcerate." Consequently, there's an increased need for alternatives to custody, including more reentry services.