Legions of liberals front for the gig economy Trojan Horse of inequality. They should be ashamed. 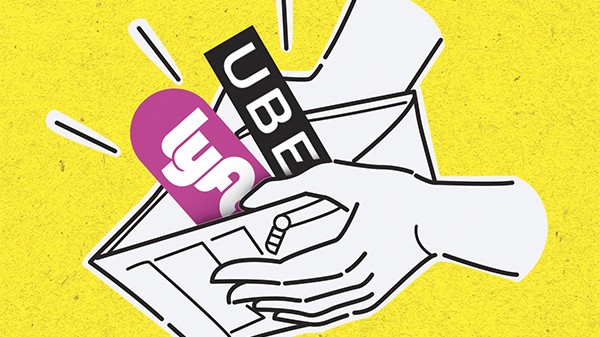 On Feb. 6, after more than 30 years as a professional driver in New York City, Douglas Schifter drove his last trip. Parked in front of City Hall, he took out a shotgun and killed himself. On his Facebook page, he had despaired of the economic ruination of his life after gig economy car services like Uber flooded city streets, destroying his ability to maintain a middle-class life.

In reporting Schifter's suicide, The New York Times wrote, "The economic hardship that Uber and its competitors had inflicted on conventional drivers in New York and London and other cities had become overwhelming."

For workers in this app-based tsunami, realizations about their economic difficulties are being conclusively exposed. Most drivers don't make minimum wage once their costs are factored in, and most quit within their first year.

Yet legions of liberals front for this gig economy Trojan Horse of inequality.

They should be ashamed.

Uber and similar companies produce Midas-like money for the Silicon Valley elites and very prosperous lives for the investment bankers, lawyers, and professional classes that serve them. Yet honest analyses show that profits for gig economy companies — if they make any — come from not paying for employee health care, pension, and paid leave, as well as foregoing outlay for governmental safety net benefits such as social security, workers' compensation, and unemployment insurance.

As Schifter wrote before his death, "They count their money, and we are driven down into the streets we drive, becoming homeless and hungry."

To protect their cash flow and flawed business model, these new economy capitalists have assembled a group of "progressive" circus barkers to shape public opinion so the companies can continue, as one driver leader recently wrote, an 18th-century business model dressed up for the 21st century.

Led by former Obama and Clinton strategists, think tanks desperate for operating revenue, foundation-financed nonprofits, and a few past and present Service Employee International Union officials with wealthy benefactors, these companies have constructed a marketing campaign that puts Mad Men to shame. The cast of characters, preaching a rosy "Future of Work," appear in media outlets throughout the land. They have been described as a progressive "Brain Trust," by New Yorker writer Nathan Heller.

Apparently terrified of worker power and solidarity, they oppose traditional unionization and extol company-controlled worker organizations. They promise pie-in-the-sky future benefits and "freedom" and "flexibility." But they're unwilling to face what life is like today for these workers. The "freedom" they're extolling is, as Janis Joplin sang, "just another word for nothin' left to lose."

For example, while Schifter was contemplating the destruction of his life, Capital and Main, a supposedly "liberal" online media outlet, featured a piece entitled "Why The Future Of Gig Work Might Not Be As Bleak As Many Believe." The California outlet lauded gig economy company Thumbtack, blaring that "CEO Marco Zappacosta discusses how those on his platform are happily earning about $75 an hour."

Partially financed by the union movement and with many progressives on its board, Capital and Main claims its "mission is to expose threats to the public interest and advance progressive ideas and policies." Yet its business podcast, The Bottom Line, has featured "Future of Work" hype man Tim O'Reilly arguing, "Long-term greedy is good," and, Natalie Foster, a regular contributor and gig economy flack condemning today's unions and instead offering the Uber Independent Driver's Guild as a model. Based in New York, the guild has acquiesced to Uber and its claim that drivers are "independent" and thus unable to unionize, in exchange for some financing and other perks.

Foster, an Oakland resident, is at the center of the gig economy positivity machine, preaching a cruel optimism of the "freedom" and "flexibility" that the work supposedly offers. (She declined to be interviewed for this column.) Active in the early Obama campaigns, Foster works with David Plouffe and Chris Lahane, former Obama and Clinton hands who are now corporate shills for Uber and Airbnb, respectively.

In 2013, Airbnb leaders and others paid for Foster and partners to start Peers, an organization for "independent workers" that, according to Fast Company, Foster positioned as "nothing less than the future of the progressive movement, uniting the values of collaboration, community, and entrepreneurship" by "building a bottom-up economy."

"But so far," Fast Company reported at the time, "Peers members are volunteering much of their time fighting local legal battles that benefit the organization's corporate partners" in New York City, Seattle, and Los Angeles. Like a failed start-up, Peers has been repurposed into the "Indy Worker Guild" to argue for "portable benefits" that Silicon Valley is pushing as a solution to gig worker precariousness while leaving corporate profits intact.

Looking at the gig economy as a whole, very few people actually work in it. Most of us are still traditional employees or part-time workers. So, to garner support for its drive to turn all jobs into "independent work," app-based commerce needs to appear to be big and important. To that end, the Aspen Institute, which counts a Koch brother among its benefactors, has joined with Cornell's School of Industrial and Labor Relations to manufacture consent for the gig economy. Cornell has agreed to establish a Gig Economy Data Hub, to study those "working independently in place of or in addition to traditional, long-term, employer-employee relationships."

Now, there's nothing wrong with studying the fissuring of the American work place. But treating the poverty and precariousness of workers' lives today as a fait accompli serves only to support its growth.

Importantly, fixating on the word "independent" is not just an issue of employing empty language. It's an issue of whether one receives benefits and fair pay for hours worked. Last month, for example, the city of Austin passed a paid leave ordinance, but "independent" workers were excluded.

Not all are fooled by the misleading terminology. Hector Figueroa, an East Coast labor leader recently wrote, "I just cannot comprehend how today, as a labor leader, I would be encouraging the spread of 'independent work.'" Cornell officials did not respond to questions about their use of "independent."

In his Facebook post before his suicide, David Schifter wrote, "The whole purpose of life is to learn, teach and love. To care for each other and better our souls ..." Gig economy circus barkers and their news and policy manufacturers claim to believe this, but the reality of life stands in their way.