I'm hazy on the details, but apparently a couple of freelance astronauts parked a Tesla at the International Space Station, Trump outlawed Twitter or something and the river of sh*t, racism, murder and disease that America presently resembles caught on fire. I dunno for sure—it's difficult to sip from the news firehouse while wearing this N-95 mask. 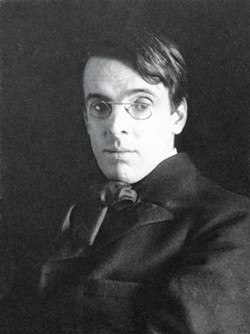 Frankly, the only thought I've had of late is a lyric from a song by Yacht:

The future has proven neither cool nor new as the same old stories cycle back into the media—white cops perpetrating violence against people of color, a mystery disease killing hundreds of thousands and the finger of an entertainment industry figure resting atop the Button. This is not the nuclear bang promised Gen X at the apogee of the Cold War. This is worse and somehow more radioactive.

So, do any other lyrics fit this moment? Thousands. Any line from the "Ball of Confusion" works as well, if not better, as does "The End" by the Doors—before the snake bit ("This is the end, my only friend, the end"—too doomsday?). As Dorian Lynskey at The Guardian points out, however, the lyric of our times is not from a song but a poem and that poem is and always has been William Butler Yeats' "The Second Coming."

Lynskey wrote an analysis about the poem's enduring utility as shorthand for troubled times that included a look at some of the work's greatest hits:

Mere anarchy is loosed upon the world,"

"The best lack all conviction, while the worst

Are full of passionate intensity."

"If it feels especially potent now, perhaps it is because we have become painfully accustomed to the idea that progress is fragile and it is all too easy to fall back," writes Lynskey. "The only consolation the poem offers is the knowledge that, for one reason or another, every generation has felt the same apocalyptic shudder that Yeats did 100 years ago."

Perhaps it's my own naivete or a relative lack of years, but this turn of the cycle seems ... different. There is a constellation of bright lights just over the horizon and if you squint at these stars just right you might even see what they spell: To misquote Yeats, "Surely some revolution is at hand."