Pllush Ascends From a Scene in Flux

Long a standout among the Bay Area indie set, Pllush is poised for popular ascent with the release of its debut album, Stranger to the Pain. 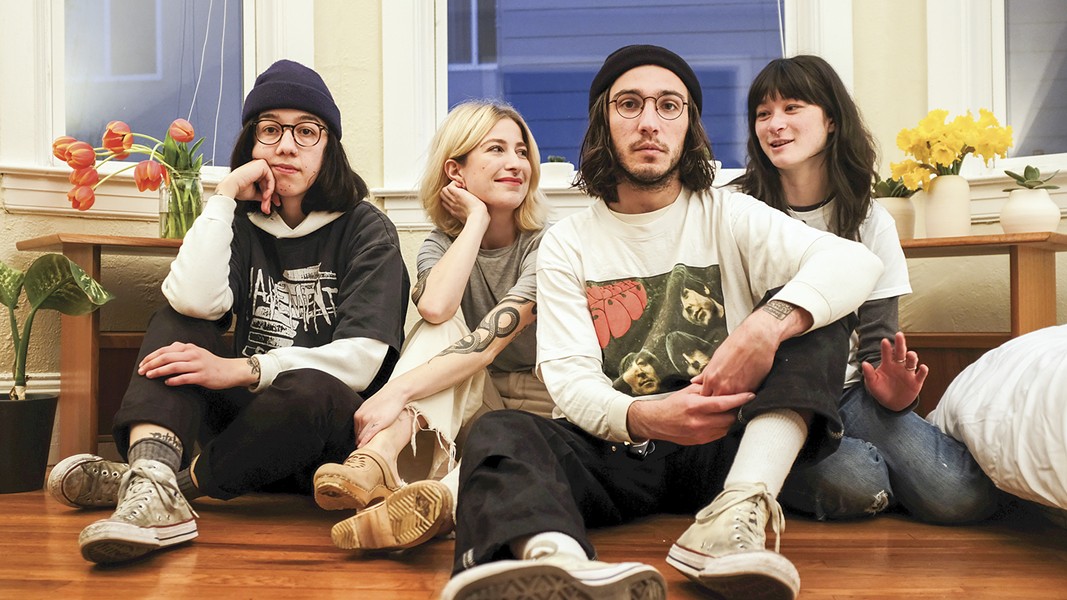 The first track on Pllush's forthcoming Stranger to the Pain, "Elliot," begins with just gossamer guitar and the breathy lilt of Karli Helm, parsing conflicted memories of the song's long-gone titular subject. Then comes an avalanche of cymbal and feedback, lending the weight of embittered sorrow to what was only moments before a wistful lament. It's not just the "loud-quiet-loud" dynamics of indie-rock cliché; it's a coupling of rage and vulnerability, fury complementing pain like cauterizing an open wound. Stranger to the Pain, the San Francisco foursome's debut full-length, surges with this kind of heaving, emo-inspired song craft, its downcast indie-pop core awash in gauzy static. Pllush, for years a standout among the Bay Area indie set, has recently drawn praise from national outlets such as The Fader and NPR ahead of the release of the album, which is due June 8 on Father/Daughter Records — one of few small, local operations to consistently shepherd homegrown indie-rock signees to larger indie labels.

Pllush has close ties to breakout groups such as Jay Som and King Woman, and counts among its peers similarly emo- and indie pop-influenced outfits such as Pardoner and Toner. It is a loose-knit, trans-bay scene with underground traits — bedroom recordings, living-room gigs — and a streak of popular ambition. In the Bay Area, sometimes the two seem incompatible: Jay Som bandleader Melina Duterte and King Woman vocalist dis recently left for Los Angeles, resurfacing perennial concerns about the local music industry's ability to sustain the careers of emerging groups such as Pllush.

Pllush formed in 2014 after Helm mentioned wanting to start a band to Eva Treadway and Dylan Lockey, who happened to have written a song earlier that week. With the addition of Sinclair Riley, who also plays with Treadway in The She's, the upstart outfit — then going by Plush — released a three-song demo, Pale, by the end of the year. Pllush appeared on those few songs with its sauntering gait and teardrop melodies already intact, a sound that's only grown more booming and confident. The demo also includes that very first composition, which is titled like a statement of intent: "Soft in the Dark." Helm, 24, dropped out of San Francisco State University in 2013 and made a series of key music connections: her short-lived garage-pop group The Sweethearts played with Duterte's pre-Jay Som group Summer Peaks, who were then still high schoolers. "I remember they were like, 'So how do you like SF State?'" she said. "They were about to graduate high school and thinking of moving here." A couple years later, Pllush performed one of its first club gigs in San Francisco, opening for Jay Som.

The group recorded its first EP, Pine, at Different Fur, where Helm later landed a job. In 2016, she and Nik Soelter of the defunct Never Young convened local groups including Mall Walk and Dick Stusso to record cover songs at Different Fur free of charge (Pllush did No Doubt), which appeared the next year as a compilation, Group Effort. Pllush returned to the studio to record 2016's Please EP, which featured vocals by Esfandiari and appeared on cassette via Father/Daughter. Helm described the band's ethos as "pretty DIY," noting that Pllush doesn't have a booking agent or a manager. But she's interested in the industry, having worked with Different Fur's in-house songwriting team on commercial commissions. And Pllush has lately landed high-profile tours and press, thanks partly to Father/Daughter proprietor Jessi Frick, who's also a music publicist. "We weren't really interested in a label unless it was an organic connection," Helm said. "Now we feel like Father/Daughter or nothing."

In a 2016 interview on Bay Bridged, Lockey dismissed claims that the San Francisco music scene is dead. "It's not," he quipped. "It's just all your weird heroes moved to LA. Let LA have them." (Lockey was likely referring to key figures of the city's 2000s garage-rock scene, such as Ty Segall and Jon Dwyer, whose move to Los Angeles symbolized the end of an era to many.) Recently, though, some of Pllush's peers have ventured south, and Helm sympathizes. "For Melina and Kristina it makes sense," she said. "Not to dis the Bay, but they kind of outgrew it."


Helm said she isn't up for that kind of change, but writing and recording Stranger to the Pain introduced a new degree of seriousness to Pllush. Before, by Helm's admission, the band leaned on shoegaze tropes like a crutch. "I was insecure about my voice. I hid it," she said. "Now we're like, who are we kidding, we've always loved pop. Let's stop pretending." 