The neighborhood’s residents met the plans with a mixture of support and concern. Many residents commented on the absence of any affordable housing in both projects. Some residents are also worried about the possible impact of simultaneous construction of two very large buildings on their businesses. Others voiced concern about whether or not residents of the new buildings would be good neighbors to the Malonga Casquelourd Center for the Arts, an arts institution that has recently received noise complaints.

One of the projects, proposed by the Bay Development Group, a San Francisco-based company, would raise a 17-story tower at the corner of 14th Street and Alice Street on land this is currently used as surface parking. The tower would include 126 apartments, most of which would be studios and one-bedroom dwellings. The project would include 81 un-bundled parking spaces in a multi-level garage. There would be no affordable housing in the building. 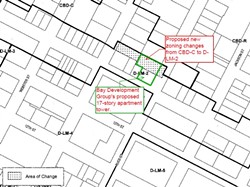 Last night's meeting also confirmed that the city's planning department has been working to spot zone parts of the city to benefit specific developers.

As I previously reported, in October city planning staffers attempted to change the zoning of several parcels along 25th Street in Oakland’s Uptown neighborhood as part of a purported effort to “clean up” the city’s planning code. But the proposed changes overlapped exactly with parcels recently acquired by Signature Development Group, and the changes would have greatly benefited Signature by increasing the value of the land in terms of how it could be developed. Last night’s meeting at the Hotel Oakland confirmed that similar zoning changes proposed by city staff along 14th Street overlapped with Bay Development Group’s proposed apartment tower and parking garage. City staffers pulled the proposed zoning changes the same night they were presented to the planning commission, and it’s unclear if they will be brought back at any point.

At last night’s community meeting, residents questioned why Bay Development Group is not planning to include any affordable housing in their building. Maria Poncel of the Bay Development Group pointed to the city’s consideration of an affordable housing impact fee as one reason why her company hasn’t considered it. “The city is currently working on a nexus study and there’s plans to look at new impact fees that would be applied citywide,” said Poncel. “I don’t know what the timing is on that.”

The second project unveiled last night would put two seven-story buildings on the surface parking lot bounded by 14th, Alice, 13th, and Jackson streets. The project would add 258 new housing units and could line 14th Street with shops and restaurants. Like the proposed nearby tower, this project would also include zero affordable housing.

Most of the units in Pianca’s buildings would be studios and one-bedroom apartments. There would be approximately 226 parking spaces, about 0.75 for each apartment. Some residents at last night’s meeting said they were concerned the elimination of the parking lot would make parking more difficult. Others praised the move, and the decision by both developers to reduce parking in both their projects in order to fit more housing and retail space and rely on public transportation. 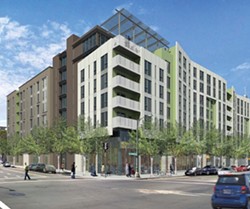 James Vann of the Oakland Tenants Union asked what community benefits Wood Partners is willing to provide as part of its project. Pianca responded that by simply building 258 market-rate apartments and adding retail along 14th Street his company is providing significant benefits to the community. “We’re providing housing, greater safety along the street,” said Pianca. “We don’t have a community benefit as some may define it, but that activity is the benefit.”

Poncel of Bay Development Group provided a similar answer to questions about the absence of affordable housing and other community benefits in the apartment tower. “This actually fulfills the goal of safer streets and activates the ground floor [with retail stores],” said Poncel. “I would say we’re making a large contribution from a fiscal standpoint because the project will increase in value and have a huge tax bill, about half of which will go to the city and the school district.”