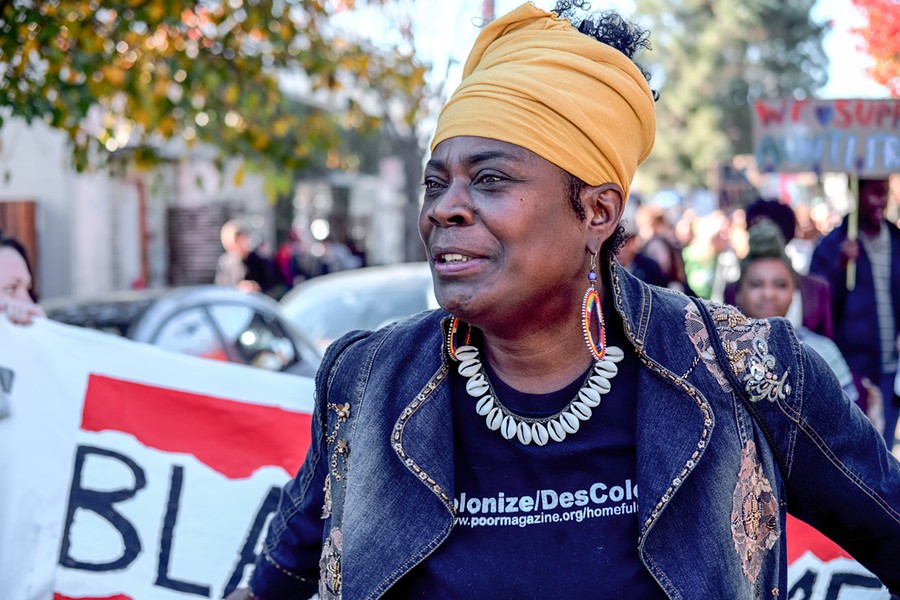 Every Tuesday, Frances Moore collects a loaf of bread from Sweet Adeline Bakeshop for her food giveaway at Driver Plaza in North Oakland. Last week, though, the longtime community organizer also delivered a letter imploring her neighbor and landlord, a bakeshop employee, not to evict her from her nearby home of more than eight years.

Natalia Morphy, along with her parents James and Alexandra, bought Moore’s triplex in June 2016, and ever since, they’ve tried various tactics to evict the 63-year-old former Black Panther. The latest attempt, which relies on what tenant advocates call a “loophole” for exempting properties from just-cause protections in Oakland, appears to be working. Natalia Morphy filed an “unlawful detainer,” considered the last step of an eviction, on Nov. 15. So, Moore and a group of neighbors and activists have taken their eviction defense campaign public — even demonstrating outside Natalia Morphy’s unit this past Sunday.

Moore is known as Aunti Frances. Last week, at Driver Plaza, the small wedge of grass and concrete where she’s dished food since 2009, she wore a yellow head-wrap and big ankh earrings. “Using food to organize, I learned that from the Panthers,” she said. “You have to meet the people outside.” Soon, a busload of kids from the social-justice-oriented preschool Abundant Beginnings arrived with colorful, hand-painted signs, and then they led a crowd of 30 or so to the bakery while chanting, “Black homes matter!”

Aunti Frances’ pending eviction relies on what tenant advocates call the “owner-occupancy loophole.” In Oakland, if a triplex or duplex owner moves in to one unit of their building, they can remove the other units from rent control if they live there for two years. But the units are exempt from just-cause immediately, allowing landlords to evict tenants for no reason. The owner move-in law was designed to help small, mom-and-pop landlords. But tenant advocates say it’s being abused.

“I would say it’s the trending problem now,” said Leah Simon-Weisberg, managing attorney of Centro Legal de la Raza’s tenants’ rights program. “Between March and November, it was half of our caseload.”

Often, Simon-Weisberg said, landlords will use an owner move-in eviction to remove one tenant. Once they move in, or at least appear to, they’re able to evict the rest of the tenants without cause. Then they can move out and rent the entire building to new tenants at market rates.

Simon-Weisberg noted that Measure JJ, which Oakland voters approved overwhelmingly in November 2016, closed other tenant protection loopholes. The Oakland City Council also recently instated a six-month moratorium on “substantial rehabilitation” exemptions from just-cause protections after claims of the practice being abused. “So now this loophole is literally being marketed to investors,” Simon-Weisberg said. “The right to make a profit inspires some shocking behavior.”

Aunti Frances grew up in North Berkeley and entered the foster system as a teen. Adopted by an activist, she got involved with Black Panther Party spinoff the Intercommunal Committee to Combat Fascism, and then the party’s choir, Son of Man Temple Singers. Eventually, she started working in sickle-cell anemia treatment at the George Jackson Free Health Clinic. Struggles with homelessness and mental-health followed, but she stabilized and started volunteering with the Berkeley Drop-In Center.

She moved into the triplex in 2009, launching her food giveaway down the block as a “self-help hunger program” in a nod to her Panther past. Driver Plaza has long been a community hub, but Aunti Frances politicized some of its regulars. They’ve protested the city’s removal of a port-a-potty, a cob oven and bench, and trees planted to commemorate felled community members. “Dozens of people rely on her food program,” said activist Rachel Gottfried-Clancy, noting that Aunti Frances collaborates with the East Bay Community Law Center to bring legal resources to people in the neighborhood. “Rides to the hospital, legal support, housing services — all of that is really jeopardized by her eviction.”

The Morphys acquired the triplex on June 23, 2016 for $750,000. Seven days later, Aunti Frances received a 90-day notice from James Morphy citing his desire to “recover possession of the rental unit for his or her occupancy” as the cause for eviction. With the help of activists such as Gottfried-Clancy, Aunti Frances responded by saying that, as a disabled person over 60 years old, she’s protected against owner move-in evictions. Six months later, Aunti Frances received another 90-day notice from James Morphy. “That time, we said that the notice didn’t meet the legal requirements,” said Gottfried-Clancy. “We expected they’d try again, just knowing that landlords don’t give up.”

James Morphy declined to comment for this report except to say that the situation has been “very stressful.” Natalia Morphy did not respond to messages seeking comment.

This year, the Morphys hired Daniel Bornstein of Bornstein Law, a controversial attorney who runs what critics call “eviction boot camps” for real-estate investors. Bornstein’s 90-day notice from the beginning of August cites the just-cause exemption for owner-occupied triplexes and duplexes. The plaintiff in the ensuing unlawful detainer lawsuit initiated last month is Natalia Morphy. (An attorney from Centro Legal de la Raza is representing Aunti Frances in the case.) According to Bornstein’s notice, Natalia lives in a downstairs unit, but Aunti Frances’ supporters dispute that it’s her main residence.

Daniel Cheung of Bornstein Law didn’t answer emailed questions about when Natalia Morphy moved into her unit and about the circumstances of the prior tenant’s departure. In a statement, Cheung emphasized the legality of his client’s actions. “Though our client is certainly empathetic to Ms. Moore, she is confident that her right to recover possession is proper, legal, and ethical.”

Last Tuesday, at Sweet Adeline Bakeshop, Aunti Frances handed Natalia Morphy an envelope containing a letter. “[An] elderly disabled black woman is being displaced from her only affordable housing option in the city where she has lived her whole life,” it reads in part. “You have the power to change this situation, and change it for the better.” Across the counter, Aunti Frances said to Morphy, “Can we talk? You haven’t even introduced yourself. Are you going through with evicting me?”
Natalia Morphy said, “I can’t do this now.”

Back at Driver Plaza, Aunti Frances pointed out that Natalia Morphy doesn’t fit the stereotypical landlord mold. Her public posts on social-media show liberal views on environmentalism and LGBTQ rights. A sign in the window of her unit reads, “Oakland Stands United Against Hate.” In a 2011 article about Occupy Oakland, Natalia Morphy lamented higher-education costs, saying she had to drop out of San Francisco State University and become a dog-walker. “It’s disappointing that a woman who seems to have some political involvement won’t lend an ear,” Aunti Frances said. “She won’t talk, so we’ve had to get creative.”

As it turned out, that Tuesday was Natalia Morphy’s last day at Sweet Adeline. Jennifer Millar, who owns the business, said that Aunti Frances has “done a lot for the neighborhood” and that she was “shocked” to learn of the “tragic situation” between her and Morphy. Millar said Morphy gave notice a couple weeks ago, but she doesn’t know if Morphy’s departure was related to the eviction. “Berkeley isn’t very fun anymore,” Millar added.

On Sunday, Aunti Frances led more than 100 supporters — the preschoolers again, plus activists associated with organizations including POOR Magazine and Anti Police-Terror Project — from Driver Plaza to Natalia Morphy’s doorstep, banners and a marching band in tow. The chant went, “Which side are you on, Natalia? Which side are you on?” Her blinds were drawn. A cat eyed the demonstrators from the window. Aunti Frances knocked and shouted, “I will not be removed.”

Aunti Frances’ home has changed hands a few times over the years, and she’s weathered other attempts by landlords to force her out. “I’ve run off some potential buyers,” she said. “Usually, they come in and see my Panther stuff and they go, ‘Oh no, never mind.’”