Oakland views itself as a progressive city, but it has increasingly relied on low-paid, part-time employees who have no job security. And workers say city services have suffered. 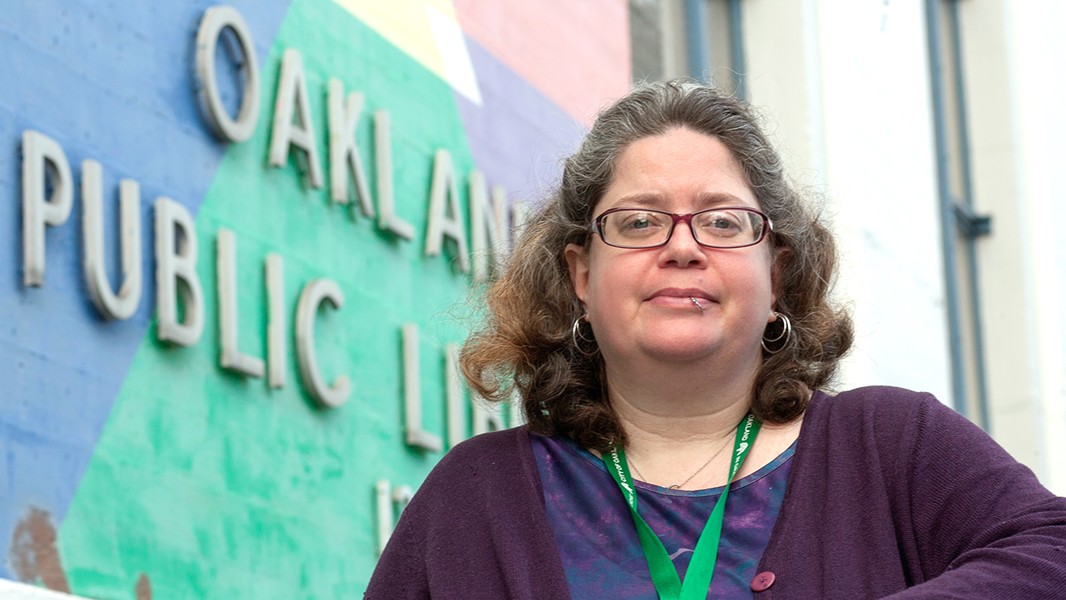 Janine deManda has worked at the Oakland Public Library since 2011. She's lived in Oakland for the last 16 years, longer than she's lived anywhere else, and views libraries as a valuable public service. In 2014, she earned a master's degree in Library and Information Science in the hopes of getting a full-time permanent job with the city. But she's still a temporary employee, and the city forbids her from working more than 18.5 hours a week.

"I want to use my skills to the best of my ability to serve the people of this city," deManda said in a recent interview. "And the city of Oakland is not making the best use of those skills or that desire to serve — not in my case and not in hundreds of others."

In December, deManda went on strike and marched outside City Hall along with hundreds of other city workers who are members of Service Employees International Union Local 1021, which represents nearly all of the city's more than 1,300 temporary part-time workers. Part-time workers make up about half of Local 1021's Oakland membership and about 28 percent of all city of Oakland employees.

There are some improvements for temporary part-time workers in the agreement that SEIU recently reached with the city — they will get raises along with the rest of the membership and a bump in their health and welfare benefit, which is an hourly addition to their wage intended to help them purchase healthcare or other benefits. And the city has been taking some steps to move temporary employees into full-time positions, such as through an upcoming ballot measure for library funding. But for most temporary part-time workers, there is little end in sight for their "temporary" status.

The temporary-part-time (TPT) classification was originally designed for seasonal or occasional workers, such as staffing up parks in summer or teaching a class one or two days a week, but many TPTs have been working year-round for the city of Oakland for years or even decades. They receive no city health care plan, can't work more than 960 hours a year (the threshold to be eligible for retirement benefits from California Public Employment Retirement System, or CalPERS), and can be fired at any time for almost any reason. And while TPTs aren't subject to the rigorous civil service recruitment process that full-time workers must go through, their hiring process is lengthy and for some includes written examinations and background screenings by the Oakland Police Department.

And the pay is often poor. Even some skilled part-time positions in the city receive just above minimum wage. In January, the city advertised on Craigslist for a part-time job at the Lake Merritt Sailboat House involving teaching boat safety to patrons. The city job required boating experience and CPR certification but paid only $13.58 per hour plus the $2.10 health and welfare benefit. Oakland's minimum wage, which is revised annually to keep up with inflation, became $13.23 on Jan. 1.

Oakland considers itself to be a progressive city and its mission statement states, "Citizens and employees shall be treated with fairness, dignity, and respect," but some city employees interviewed for this report compared Oakland's labor practices to notoriously exploitative companies like Walmart and McDonald's.

In November, SEIU sued the city for overusing part-time labor, arguing that it violated the city charter, which establishes the goal of attracting "the best and most competent persons available" and "to provide the employees security of tenure, with advancement or promotion within the service, where practicable." Although the charter allows for hiring temporary part-time workers "when required," the lawsuit argues that the city has manipulated this exception "to intentionally deprive city employees of the security of tenure and the possibility of advancement or promotion within the civil service system."

"I want to use my skills to the best of my ability to serve the people of this city," deManda said. "And the city of Oakland is not making the best use of those skills or that desire to serve — not in my case and not in hundreds of others." tweet this

Oakland's extensive use of part-timers saves the city millions of dollars each year and converting part-time positions into full-time ones would be costly. Union officials also acknowledge that replacing part-timers with full-time employees would lead to fewer city jobs overall, but they argue that the shift would reduce the city's mistreatment of workers. Employees also say that converting more jobs to full-time would improve city services for the public and that the city's use of part-time labor has led to disorganization and high turnover in city departments. City supervisors struggle to fill shifts while preventing their employees from working too many hours, while part-timers often lack the institutional knowledge needed to adequately serve the public.

In an interview, Ian Appleyard, the city of Oakland's Human Resources director, noted that temporary part-time employees are not completely without job protections: They are protected by city, state and federal laws that guarantee a minimum wage and that their workplaces will be safe and free of discrimination, among other things. "The main difference for the majority of the part-time employees is they are collectively represented by SEIU, which is different than many part-time employees in different jurisdictions, and certainly in the private sector," Appleyard said.