Aubrey Plaza partakes on 'Getting Doug With High' back in November

In another sign of how more and more Americans are coming out of the cannabis closet, very mainstream network television actor Aubrey Plaza of "Parks & Recreation" appeared on a weed-focused online video series and apparently knows a LOT about vape pens. 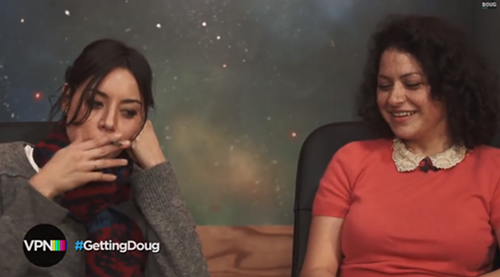 Last weekend, we caught up on back episodes of the very stony, yet electrifying show "Getting Doug with High," starring comedian Doug Benson. Benson gets stoned with Hollywood stars and chats with them about their weed history and hot topics. While it’s a very low-budget and laid back show, there’s a tension in it that comes from the fact that weed is still a federally illegal, schedule 1 drug.

Benson is essentially inviting Hollywood stars to out themselves as federal drug felons. It’s suspenseful seeing how guests will react to being stoned on the show, and the conversation inevitably turns to pot’s illegality, and the potential repercussions of outing oneself. It’s a brilliant concept, executed with an amiable dumbness.

Cue the lovely, deadpan, sardonic Aubrey Plaza, who - back in November- shows almost zero change in behavior from sober to stoned on the show. Clearly a pro, she critiques the messiness of refillable vape pens versus disposables and outs the comedic icon Amy Poehler as an herb aficionado.

“You don't have family members who if they came across this would be shocked?,” Benson asks Plaza.

“It’s a great time to be here, Doug. It’s a very relevant time to be here. This - three years ago? Not a good idea. For me. Right now? Great idea. Tomorrow? Who knows. ... I usually operate on the basis of, 'My career is pretty much over.'”

If you're taking today off, don’t miss "Getting Doug with High" with Aubrey Plaza and ‘Arrested Development’s’ Alia Shawkat.