Pages And Party Lines at the Bay Area Book Festival

What this weekend’s Bay Area Book Festival says about Berkeley. 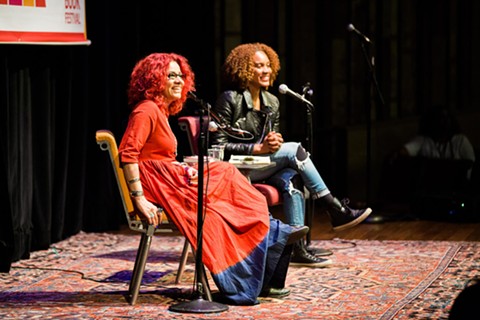 The night of the 2016 presidential election, one of Cherilyn Parsons’ reactions was, “Oh my God, is a literary festival even relevant?”

Parsons was in the deep planning stages of the third-annual Bay Area Book Festival, which she founded. “My next thought was, ‘Wait a minute, it’s more relevant now than ever,’” she told the Express.

A voracious reader, Parsons believes in the power of the right book in the right hands. “There are books that have changed the world,” Parsons said, rattling off Silent Spring and The Feminine Mystique, among others. “Books change people individually, they change hearts and minds.”

Keeping that in mind, the focus of this year’s festival, which goes down this weekend, is “literary activism.” Author Susan Griffin, who will speak, describes reading itself as a radical act. “Literature takes you to a deeper level of yourself and, even if it’s a wild fantasy, it actually enables your capacity to know things, and enables your trust in your own perception, and enables you to see reality better,” she explained.

“Books change people individually, they change hearts and minds.” tweet this
In a world with ever-increasing ideological division, what we read is a political statement. This year, the festival’s organizers sought out writers with works relevant to current events. “We’re activists in that we’re choosing books and writers that are really pushing an agenda,” one that Parsons says promotes tolerance and social justice.

“Literature is a safe space to go into all these other perspectives and experiences,” she said.

But for all the perspectives presented at this weekend’s Bay Area Book Festival, there will be one missing: the conservative (and no, having Arlie Russell Hochschild in attendance does not count).

For a festival with an estimated 50,000 attendees, it is a lack in perspective of which Parsons is shrewdly aware. “I wanted to invite some people who had pretty extreme conservative ideology, because I wanted to have there be debate.”

Parsons has hope that, next year, there can be meaningful dialogue between liberal and conservative readers and writers, without the fear of violent protesters. “I’d like to do that in future years, bring some intelligent, conservative speakers.”

Until then, she is grappling with the same question many of us are facing: How to get people to read across party lines?