Peter Jackson’s First World War documentary, They Shall Not Grow Old, is one of the most remarkable war movies ever made. 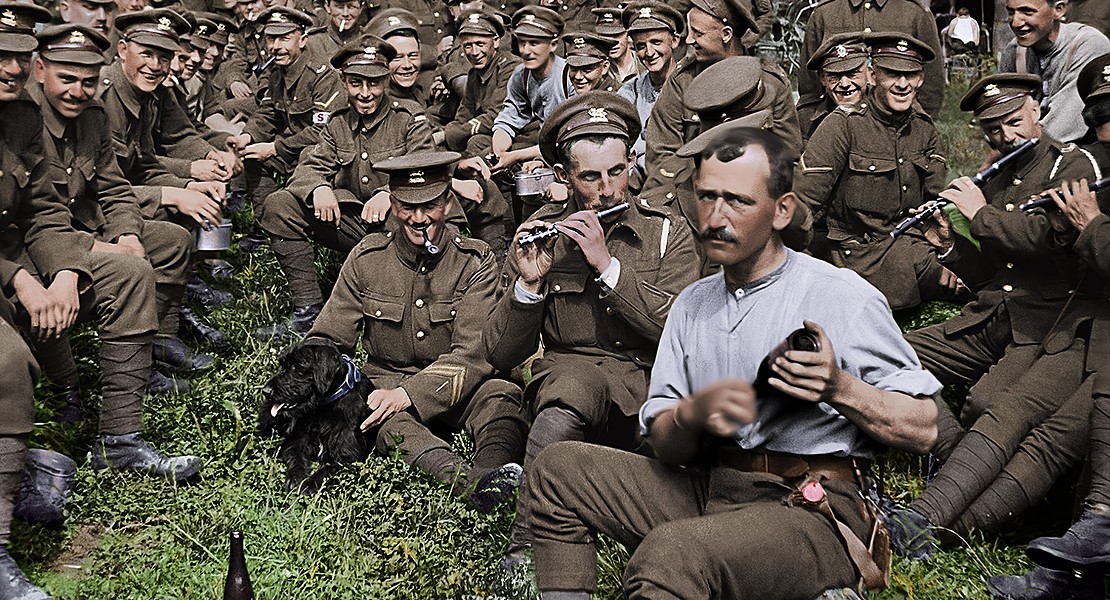 To hear Peter Jackson explain it, he made They Shall Not Grow Old to show what it was like to be an ordinary foot soldier on the Western Front in the First World War, as well as to pay tribute to British Army troops — including his grandfather — who served in that muddy, bloody conflict from 1914 to 1918.

To construct the 99-minute documentary, filmmaker Jackson (The Lord of the Rings) utilized 100 hours of period footage from the archives of the Imperial War Museum in London — co-commissioned by the 14-18 NOW program in association with BBC. That film is accompanied by the museum’s 1960s-era recordings of surviving British veterans of the War to End All Wars. The conflict killed 1.1 million British combatants — in addition to 1.4 million French military, 2 million Germans, 1.8 million Russians, and almost 8 million total civilians.

By any measure, WWI was a slaughterhouse. The men and women who fought in it suffered through the worst that “modern warfare” had to offer. And yet such latter-day narrative triumphs as All Quiet on the Western Front, Wings, Paths of Glory, and even Charlie Chaplin’s 1918 grunt-level comic view in Shoulder Arms, seldom told the whole story — the everyday thoughts and experiences of the troops. The thing that sets They Shall Not Grow Old apart, that makes it one of the grandest, most instantly accessible of all war films, is Jackson’s use of modern technology to help bridge the gap between then and now.

With the aid of his WingNut Films technicians, Jackson restored the grainy, 100-year-old footage to 21st-century digital clarity. After that, the original black and white film was colorized in realistic natural tones (mostly muddy ones). Then, the old-fashioned hand-cranked film was corrected to the industry standard 24 frames per second — no more herky-jerky, sped-up movements. Suddenly, the haggard-looking men in the trenches are recognizable human beings who laugh and grimace and gesture like anyone else.

Finally, Jackson’s team tackled the signature problem of all previous WWI newsreels: the silence. Before this, we had to imagine the sounds while watching doc footage of the Great War. In Jackson’s restoration, there is no narrator, only the recorded testimony of veterans from all corners of the British Empire, each with his own distinctive accent. Realistic ambient sound was added, including booming artillery that shakes the theater walls. Jackson went so far as to hire forensic lip-readers to find out what the soldiers onscreen were saying, then got actors to fill in bits of casual “overheard” chatter amid the clank of equipment and thunder of the big guns.

The effect is remarkable. It is one thing to see dim outlines of troops facing the gantlet of machine-gun fire while charging across No-Man’s-Land, but it’s entirely more frightening — and emotionally involving — to see and hear it in such startling detail. And when the soldiers get a few moments between battles to joke around and sing with their mates, we can feel their relief like never before. Jackson’s choice of footage emphasizes the plight of the infantrymen, who despite hatred of the “Huns” often displayed mercy and even a touch of humorous camaraderie with their German counterparts across the way.

The movie proceeds in chronological order. The first scenes, of the lead-up to war and the mass enlistment of British civilians, is shown in the usual off-speed black and white. That changes to full color and realistic presentation when the troops reach the front, and we get our first fully enhanced look at the conditions in which they fought and died. The labyrinth of trenches stretching for miles. The survival etiquette of preparing tea — smoke from fires draws enemy bullets, so British Tommies use red-hot machine gun barrels to heat their morning cup. Lice (aka cooties to the Americans) as permanent companions. A general infestation of rats, feasting on unburied corpses and whatever else they could find. Poison gas and lines of blinded soldiers being led away after an attack. Mud so deep and gooey that unwary men disappeared into it forever. And hanging over the battlefields in every corner, the omnipresent smell of death, recalled in awestruck tones by the men who came home.

Despite everything, some soldiers maintain a derring-do attitude, like the one who says he enjoys the war as an adventure, with “a slight spice of danger to make it interesting.” When the firing occasionally stops, we see soldiers laughing and playing songs. Jokes are a means of coping with monotony and the threat of sudden death. They have the familiar English habit of humorously renaming foreign locales, in one case to defiantly make light of a grim situation — the Belgian town of Ypres, scene of some of the war’s fiercest fighting, came to be pronounced “Wipers.” When British Army troops first noticed German uniform belt buckles that proclaimed Gott mit Uns (“God is with us”), their answer was: “We got mittens too!” While we’re watching them horse around, we find ourselves wondering which of those smiling faces would never make it. Very few films in the history of the art form have captured the past with such immediacy.

Jackson’s masterpiece is outfitted with a suitably majestic musical score by the New Zealand group Plan 9 (David Donaldson, Steve Roche, and Janet Roddick). The film ends with a lusty version of a popular song of the day, “Mademoiselle from Armentières,” a bawdy commentary on the exploits of soldiers on leave. But the film’s whistled intro is the master stroke, a ghostly tune floating over images of impending conflict.

They Shall Not Grow Old, distributed by Warner Bros, has been presented in 2D and 3D in North American theaters using the “event-cinema” formula of one-night stands in selected markets, beginning in December. But this scattershot style of exhibition only confused and frustrated potential audiences who wanted to see the film. The latest word from Warner Bros is that it will open in approximately 20 Bay
Area theaters on Friday, Feb. 1, for a regular weeklong engagement, with special pre-shows the evening before.