Several OUSD directors want the district to formally oppose the city's sale of public land for a new charter school, but Aspire says the district is illegally interfering. 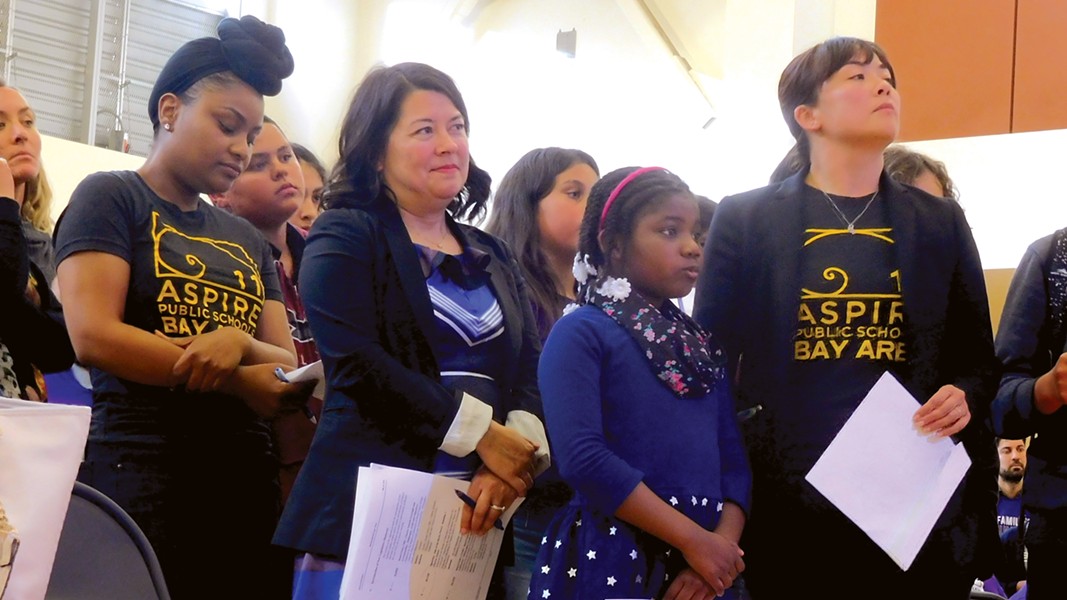 Last week, the charter school operator Aspire Public Schools warned the Oakland Unified School District that it will file a lawsuit if the district takes any steps to oppose the city's sale of public land for construction of a new charter school. The legal threat was communicated in an email sent to the school board on June 5 — the day before the district's board meeting at which directors were considering a resolution objecting to the controversial land deal.

"The District's unlawful conduct must cease and desist immediately," wrote Kimi Kean, the Bay Area superintendent of Aspire Public Schools, and Carolyn Hack, Aspire's CEO. They characterized OUSD's potential opposition as a "politically-minded scheme" that is "tortious and unlawful."

They also warned OUSD board members and staff that they, personally, could be subject to litigation if they speak out against the land deal.

They wrote that Aspire will pursue "all available legal remedies, including bringing a lawsuit against the District for tortious interference, unfair business practices, among other claims, and seeking monetary damages, injunctive relief, and attorneys' fees against the District and any person associated with or employed by the District who has participated in the District's unlawful conduct."

Aspire sent the legal warning in response to a resolution being considered by OUSD's board that would inform the city about the district's concerns regarding the controversial land deal.

Specifically, the resolution objects to the land deal because the new charter school would be built near two existing district-run schools, possibly siphoning off students and undermining OUSD's finances. The district is also currently attempting to create a plan for its facilities and enrollment, but the number of charter schools operating in the city makes coordination difficult.

"There are Oakland renters getting pushed out and this is public land that could be used for affordable housing," Gema Quetzal, an OUSD student who sits on the board of education and holds a symbolic vote, said at last week's meeting. "We already have too many schools in that area."

The city shouldn't exacerbate this chaotic situation, the resolution reads, and the city should seek the district's input before selling public property to charter schools, even though there is no legal requirement that the city do so.

The resolution was drafted by several OUSD board members who said they weren't informed about the city's proposed land deal with Aspire until it came up for a vote at an Oakland City Council committee meeting last month.

But Aspire's leaders claim that OUSD was fully aware of their plans to build the new and expanded campus. According to Aspire, the opposition of some school board members is a dishonest reversal that stands to cost them millions of dollars that they have already sunk into the project. For example, Aspire applied for and obtained a $30 million state grant in January 2017 for the new school campus.

"It was crystal-clear 10 years ago that this facility was not a long-term option," Kean said at a school board meeting several weeks ago, referring to the campus on Courtland Avenue that currently houses Aspire's ERES Academy.

Aspire staff claim that the Courtland Avenue campus, which is shoehorned into an old private religious school building, is too small for the 222 students who currently attend, and that there are numerous physical problems with the building. The charter school also plans to expand its enrollment to over 600 students when the new campus is completed.

Instead, in 2015, Aspire and Pacific West Builders, an Idaho-based private developer, approached Oakland city staff with a proposal to purchase the Derby Avenue Parcel, a slice of city-owned land in the Fruitvale neighborhood one block off International Blvd. Oakland officials agreed to exclusively negotiate with the charter school and developer without putting the land up for competitive bidding. Although the 2015 authorization by the council called for a charter school plus affordable housing at the site, the affordable housing component of the project was later dropped.

The project wasn't discussed again publicly until last month when the city council was asked to give final approval for the land sale. But the Oakland City Council tabled the item after hearing the concerns of school board members, including Roseann Torres, Shanthi Gonzales, and Jody London. It's unclear if and when the council will reconsider the land deal.

In the meantime, Aspire and charter school lobbyists have been putting more pressure on the city and school district. For example, on May 24 the California Charter Schools Association issued a press release calling the claim that OUSD wasn't aware of Aspire's efforts to purchase the city land "unfounded." Maxwell Daigh, a regional director with the Charter Schools Association, stated in the press release that in 2014 OUSD's board approved a resolution that authorized Aspire to seek funding for a new campus.

"It's irresponsible for publicly elected OUSD school board members, accountable to the families they serve, to mislead the Oakland community by spreading misinformation about Aspire's plans for expansion," Daigh said in the press release.

But OUSD officials contend that the 2014 vote wasn't an authorization to build a new campus in a new part of the city and dramatically expand enrollments.

"This document is a compliance document we are required by the state to submit when we don't have any vacant campuses for charters to occupy," OUSD director Shanthi Gonzales wrote in an email to the Express. "It was by no means intended to serve as a blessing to open a larger school without consulting with the school district."

Other school board members appear to be siding with Aspire, however.

At last week's board meeting, two OUSD directors made it clear that they're not opposed to the city's land deal with the charter school. Director James Harris said that weighing in on the sale of city land to Aspire is not within the district's "purview" because it's a transaction between another government agency and a charter school.

Director Jumoke Hinton-Hodge also criticized some of her fellow board members for opposing the city's land sale to Aspire, and she motioned that the board postpone voting on the resolution until receiving legal advice about the threatened litigation from Aspire.

The school board's attorney, Marion McWilliams, responded during last week's meeting that she wasn't worried about Aspire's letter. "From a legal perspective, I'm not concerned if you vote tonight," she said.

But despite this assurance, the board voted to postpone. Only director Shanthi Gonzales voted against postponing.