It’s opening day at Hawker Fare, and by a little past noon the place is packed, with a steady stream of eager diners lined up by the door. When a Michelin-starred chef puts together a menu where everything’s under ten bucks, and then the Internet buzz machine does its thing, you know the people will come.

Maybe you’ve heard the story by now, about how Hawker Fare is located in the uptown Oakland ‘hood where Chef James Syhabout grew up (before it became “Uptown”) and in the space formerly occupied by a restaurant his mother ran when he was a kid. And how instead of serving more of the precise tweezer food he’s wowed Bay Area gastronomes with at Commis, Syhabout promised a menu of reinterpreted rice bowls and Asian street foods — the kind of stuff he grew up eating.

The menu is divided into two main sections, the Snack Aisle — a handful of street fare and salad options — and the Rice Bowls. From the snack section, we decided to try the Siamese Peanuts ($3) and the Green Papaya Salad ($6.50). And to drink, I had a Thai iced tea ($2.50), which was one of the best I've tried, very smooth and not overly sweet. 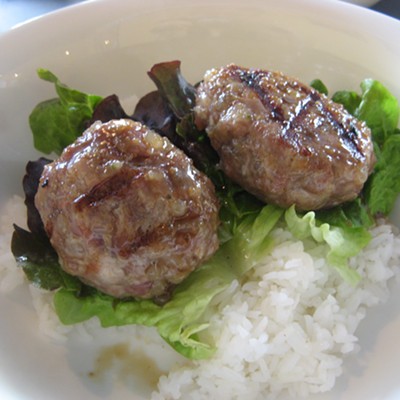 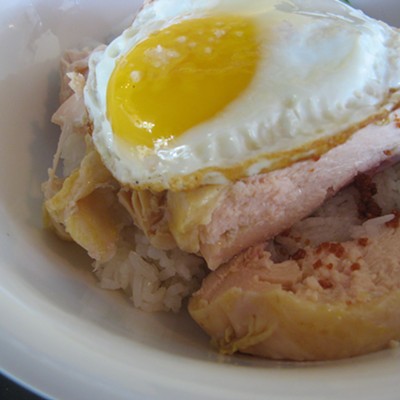 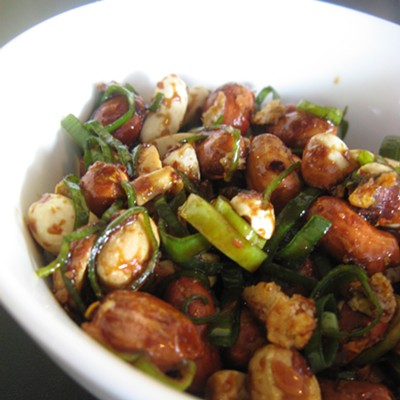 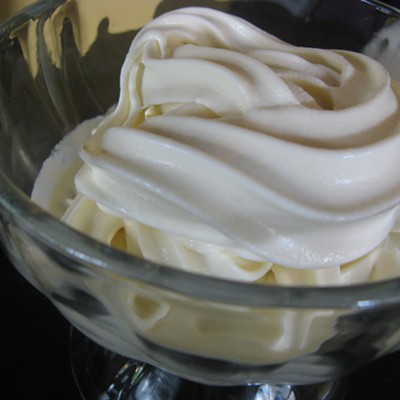 The Siamese Peanuts were a highlight: house-roasted, caramelized, and tossed with shrimp paste, chili flakes, scallions, and fennel. These are best eaten, as our server suggested, with a squeeze of lime — a hit of acid to balance out the flavors. There's something about fishy flavors and peanuts that go really well together, and it’s not difficult to imagine digging into a bowl of these late at night, especially with a cold beer.

Our server told us the papaya salad is a take on the Laotian version (rather than the Thai), which tends to mean that it’s less sweet and heavier on the fish sauce. The salad contains thin strips of unripe papaya, raw long beans, grape tomatoes, dried shrimp, fish sauce, tamarind, and lime juice, everything muddled together with an old-school mortar and pestle — no molecular-gastronomic magic here. I won’t attempt to comment on authenticity, but I will say that I missed the element of heat in the papaya salads you can get at good Thai or Laotian places. Hawker Fare’s version wasn’t spicy at all. Still, it’s nice to see that the menu here doesn't seem to compromise, at least not to please Western palates — this is a funky-tasting plate of food, with the fish sauce flavor kind of smacking you in the face. It wasn’t my cup of tea, but I could see how you might crave this if it was a flavor profile you grew up with.

For my main course, I opted for the "Kao Mun Gai" ($9) and paid an extra $1.50 for a fried farm egg on top (an option available for all the rice bowls). This is the classic Thai version of Hainanese chicken rice, a dish that’s also wildly popular in Singapore and Malaysia — it’s basically poached chicken that’s served over rice that’s been cooked in chicken broth and rendered chicken fat. At Hawker Fare they sous-vide the chicken, giving the meat a wonderfully tender, velvety texture. It’s worth noting, too, that this is a really generous portion of chicken — a hefty split breast, with the yellow skin still attached. I would have liked more of an intense chicken flavor in the rice itself, but ultimately the dish is a vehicle for the dipping sauce that accompanies the chicken: a dark house-made salted mung bean sauce that’s slightly thickened and lip-smackingly good, striking a perfect balance between sour, sweet, and salty.

My dining partner ordered the "Issan" sausage rice bowl ($9.50), described on the menu as “grilled and glazed spicy pork meatball with braised pork skin, coriander seeds, garlic and lemongrass.” The two big sausages that are the focal point here are more thick patties than meatballs and tasted like a not-so-distant cousin of the slightly sour Laotian sausages served at Champa Garden. We enjoyed the flavors, but felt that it was a bit unsatisfying eating a big bowl of rice with just a couple meat patties and some lettuce — like maybe there should have been some kind of sauce or garnish. (It was also hardly spicy at all.) But, stopping by our table later, Chef Syhabout mentioned that the sausage rice bowl is actually his personal favorite: "You've got to get it with the egg," Syhabout said. "It's ridiculous." So there you have it.

Finally, a limited dessert menu gives you a choice of three different ways of eating the restaurant’s custom-made condensed milk flavored Straus soft-serve ice cream. We couldn't resist trying the Hawker "Affogato" ($4), which is a generous bowl of the ice cream served with a shot of hot Thai coffee on the side. The condensed milk flavor is pleasant but subtle — which was a good thing, we thought. Once we poured the coffee over, the whole thing was like a kind of deconstructed Thai iced coffee or a bowl of particularly tasty coffee-flavored ice cream soup.

Justin Yu is Hawker Fare’s chef de cuisine, and he’ll keep the kitchen running while chef-owner Syhabout is busy at Commis. But Syhabout was on hand for the opening lunch service, looking relaxed and casual. He chatted with customers, many of whom seemed to be Commis regulars, and pitched in both in the kitchen and at the front of the house — we got a kick out of seeing him spend several minutes drying the silverware.

The verdict: We dug the low-key vibe, the old school hip hop soundtrack. Service was friendly and attentive — not too many opening day jitters. Most of what we ate was tasty, and everything was reasonably priced. Did anything knock our socks off? No. But it's important to note that this was the first day, and we’re not sure it’s meant to be that kind of place anyway. So we’ll be back soon to try some of the other rice bowls, including a fantastic-sounding one featuring a 24-hour pork belly and another with a satay-style beef short rib.

Go early if you can because, if opening day was any indication, the daily lunch rush is going to be bonkers. You’ll eat well, and relatively cheaply. And, if your experience is anything like ours, the smell of fish sauce will linger on your fingertips for hours afterward.