One of Oakland's Most Historic Figures Was Also Horribly Racist

Jack London wrote of exterminating Chinese, the genocide of "lesser breeds," and the supremacy of the white race. 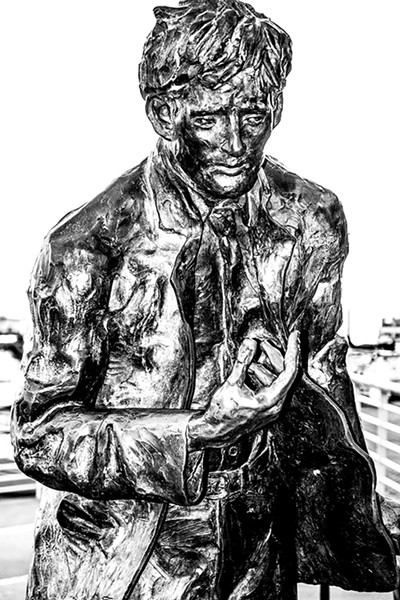 In 1951, Jack London Square officially became Jack London Square. The famed author spent much of his childhood along Oakland's bustling waterfront, working as an oyster pirate and sailor before venturing off to new lands. He would go on to write The Call of the Wild, White Fang, and The Sea Wolf — classics you were surely forced to read in high school. Those books also do little to paint a full picture of the man behind them.

London's other works, however, reveal his complexity: He advocated for the assassination of political leaders, fought for socialism, and, ultimately, was full of hypocrisies. They also depict someone who was undoubtedly, openly, and horribly racist.

One of the best examples is "The Unparalleled Invasion," his science-fiction short story published in 1910. The story begins in China, where society has prospered and the population has exploded — so much so that there are more Chinese people in the world than Anglo-Saxon. To that news, London wrote, "the world shivered."

In response to a rise in Chinese immigration, the United States and other Western countries conducted mass biological warfare, sending scores of deadly diseases to China and destroying its population — an act that London described as though it were a heroic feat. A year later, the West arrived, sentencing any remaining survivor to death and creating a glorious colony for white people: "the sanitation of China." The end.

Perhaps the most blatant, though, was his 1901 essay "The Salt of the Earth," in which he establishes that "the salt of the Earth" are English-speaking Anglo-Saxons, "a race of mastery and achievement." He goes on to say that white people murdering those of other races is purely natural selection — non-whites are destroyed once they come into contact "with superior civilization," he wrote. In the face of population growth, he advocated for genocide of "the lesser breeds."

Maybe folks weren't familiar with the breadth of London's work beyond seafaring adventures and triumphant dog tales back in 1951 at the time of Jack London Square's naming, but they certainly should have been aware by the '90s. Yet the life-size bronze statue of London, sitting at the foot of Broadway overlooking the water, wasn't erected until 1996.

It's still a noted highlight of any tour of the Jack London district. Little bronze paw prints lead visitors there, as well as to a replica of a cabin London graced with his presence next to Heinhold's First and Last Chance Saloon, where London was also purportedly a regular. The Oakland tourism website is chock-full of references to London, who gets mentioned in the same breath as Gertrude Stein and Tom Hanks as Oakland's most notable former residents.

Perhaps, given his upbringing and the times, London's views were inevitable. In 2010's Wolf: The Lives of Jack London, biographer James L. Haley details how London's mother was a crazed racist who found it humiliating to live near Black people.

And that was in Oakland.