OPD has kept the cases secret, but the department’s independent monitor mentioned one of them in a report filed in federal court last month. 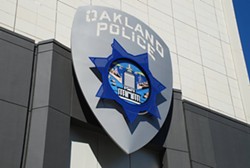 Two Oakland cops recently had their guns taken by civilians and potentially used in violent crimes. One of the officers has been fired from the department after providing his gun to a friend and then obstructing a police investigation into the friend's actions. The other officer's gun was allegedly taken by a family member and used in a shooting.

Sources said that the second case involves a sergeant who has worked at the department since 2008.

The sergeant's gun was taken by the son of her boyfriend and used in a shooting somewhere in Contra Costa County last year, sources said. Sources also said that an outside police agency located the shooting suspect shortly after the incident and questioned him and the sergeant, but they found inconsistencies in their stories. Investigators later suspected the sergeant harbored the suspect and coached him on how to talk to the police. OPD opened an internal affairs investigation into the sergeant's actions, and the sergeant was subsequently placed on administrated leave, sources said. Meanwhile, the Oakland Police Department has released no information about the shooting or what they believe the sergeant may have done afterward.

The other firearms case, which the department also has kept secret, was mentioned publicly for the first time last month when OPD's independent monitor described allegations in a report filed in federal court: “[A]n officer was sustained for improperly providing a firearm to an acquaintance and then obstructing the investigation into his actions,” wrote Independent Monitor Robert Warshaw in the Feb. 23 report.

It's unclear whether the person who took the officer's gun committed a crime with it or whether anyone was injured.

Warshaw wrote in his report, however, that OPD internal affairs investigators recommended that the unnamed officer be fired from the department for allowing his firearm to end up in someone else's hands.

OPD spokesperson Officer Johnna Watson confirmed in an email to the Express that the case referred to by Warshaw in his report resulted in the officer's termination. Watson did not provide any comment about the allegations against the sergeant in the other case, however, but she did confirm that the sergeant is still employed by OPD.

Police officials in Oakland and other agencies would not say on-the-record whether there are any criminal investigations into what happened with the OPD officers' guns when they were taken by civilians. But several sources said they believed that the sergeant's gun and car were used in a shooting that took place in Richmond last year and that a criminal investigation is ongoing.

Richmond police declined to confirm or deny the existence of any case. The Contra Costa County District Attorney’s office said they were unaware of any cases involving an Oakland police officer’s gun.