On the Road with Victory and Associates, Part 8: Austin, TX SXSW

We started the last day of SXSW not having a show, we ended it playing a ferocious four song set with more intensity and anger than most bands can muster in their sad, sorry existence. Living like hell ass kings. Brothers doing it for themselves. Bringing the damage. These Things are FACTS. 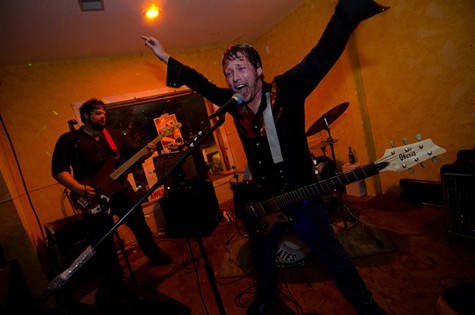 After getting a lead from a rad fan in a Helms Alee shirt at the Latest Flame Records showcase, I did some follow up and booked us something at Club 1808 in Austin, a place I hear that is more known for crazy noise shows then anything else. We quickly hooked up our Louisville coharts and label mates Trophy Wives and Ol’ Dirty Gritzy got his ex-bandmate Cody’s band Bad Chapters (local) on the bill.

I do so love it when a plan comes together.

V&A spent most of the day the day before exploring around Austin and SXSW with our friend Roy Felps who runs the excellent One True Dead Angel webzine. Today we set out on our own, with the full intention to see Torche rock the house.

Well, the best laid plans of bands and men, the offer of Free beer™ led to lines out the door, so we missed the majority of the band we wanted to see for the second time (Future of the Left being the first). However, it was still a rad scene, coupled with the added ridiculousness of St. Patrick’s Day being in full force (amateur drinking and a preponderance of the color green). I do not object to being elevator eyed by gorgeous young ladies in the least. That is solidly ok by me.

SXSW is truly a scene. I can see where the constant inundation of music from every angle, both great and…well not so great, can be a complete and total overwhelming prospect. At a certain point, synaptic and auditory shutdown become a coping mechanism and necessity. However, the entire downtown area becoming a block party allows one to kind of get into the idea of possibility. Any street corner is about as Plausibly Wild as it gets. I’ll speak more to that later, but this is a thing I dig. We spent a good amount of time just walking around, scored some delicious food and met up with the lovely and talented Masha of twitter renown.

Then later, the show… the show.
The venue has a front stage, middle stage and an outside stage in the back. The back stage is all metal bands and one metal band opens up their set by chanting, “Let’s get weird! Let’s get weird!” and then proceed to play the least weird, most boring metal I’ve heard in quite some time. Life is too short; I go inside and drink a beer immediately.

As for the inside, where to start? Let’s call it a singularity of unprofessionalism and self -involvement. Riddle me this: How can a band setup for thirty minutes, sound check for twenty and then try and play a forty-five minute set without any sense of awareness that there are FOUR OTHER BANDS AFTER THEM. This is SXSW, son - not your practice space. Get up and get it done or I will chokehold you and kick your oversized pedal board down the street. More pedals does not mean more talent, hoss.

Bad Chapters FINALLY get to play an hour and 45 minutes after they were supposed to and they play a spirited and sparse 15 minute set of Fugazi-ish rock. Nice work dudes. We then hustle on stage immediately and open the set with Friend Rock City, a not so nice castigation of all things weak and indulgent about live music. Breaking down drums on stage? Check! Overcrowded bill running off schedule? Check! You can understand our rationale for opening with this one. This night, we are fueled by righteous indignation and fury.

You sink every part of your being into every sung line, guitar chord, bass note and drum hit. You put forth every social inequity, unfairness, frustration and woe you have and erase it completely in the wave that encompasses you.

That’s how it’s done.
Then you get the hell off the stage.
Four songs. Suck it.

Trophy Wives come up on stage next and rule it until the place is shut down. At this point you should know to check ‘em out. So get on that would you?

Afterwards our crew decides to get some post show food at a local Taco Cabana where we pay witness to a hilarious interaction between a tiny man FLIPPING OUT and cursing the 6’6” gentlemen ahead of him for cutting in line, which wasn’t remotely true. Cursing spitting, stomping… and then, after the ineffectually-dumpy security guard does nothing… STEALING SOMEBODY ELSE’S ORDER AND SITTING DOWN TO EAT IT INSIDE!

The manager orders that nothing be done and we joke that the taco thief in question is actually Rick Perry’s illegitimate son, ala Arnold Schwarzenegger. In this scenario, the reason that the manager gives him a pass is to not anger the Governor. Clearly, this is comedic gold and Ricardo Perry enters the pantheon of Victory and Associates lore while decompressing a stressful night.

Later, I castigate myself for being controlled by my anger at the show earlier, something I battle with all the time. Then, in reflection I am overcome with pride with my bandmates for delivering the goods when the chips are down. I’m glad we got to play again, and as jacked as parts of it were, it was actually pretty fun. Planting seeds.

So what is the greater meaning? Is SXSW “worth it”? Is it really about music, or is it about a mass confluence of social media and hype? Somehow it’s about both, but it’s mostly about possibility. It’s what you make of it, and that’s something that I think can hold to a larger part of society as well. It’s easy to focus on the negative things in life: the injustice, the things you hate, things you don’t understand. What lit my fire was seeing people being self empowered, setting up generators wheeling and dealing amazing off-the-cuff showcases, and people being more receptive than they would be in normal times. It’s as much about music as you make of it. There’s a certain kind of “why not?” sort of mentality that I would like to see more of in general life.

I had a blast and next time is going to be even better.

Thank you SXSW.
Thank you Latest Flame Records.
Thank you Trophy Wives, Nervous Curtains, Bad Chapters, Roy Felps, Mike White, Sidebar, Club 1808 and everybody else that lent a hand.
Thank you East Bay Express for letting me write this here, thanks to Ellen Cushing for editing my hyperbole-laden ramblings and thank you for reading. If you like what you see, please consider sharing it, people to people is the only way anything changes these days.

Stuff we sold: 2 vinyl copies These Things Are Facts

Setlist: Friend Rock City / Brothers Doing It For Themselves / Turn Down the Guitars / For Serious