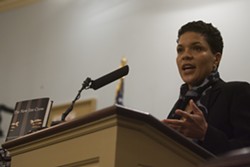 In 2001 the Oakland Police Department released one of its first batches of stop data. The findings were that African Americans were 3.3 times more likely to be searched than whites. Racial disparities were also evident in whether or not the encounter resulted in an arrest.

Michelle Alexander, author of The New Jim Crow, was running the ACLU of Northern California’s Racial Justice Project back then. She called the disproportionate searches of African Americans by the Oakland police “unacceptable.”

That was before the City of Oakland was sued over patterns and practices of misconduct, including racial profiling, and before a more than decade long reform effort began under the watch of a federal judge.

African Americans also made up an overwhelming majority of persons stopped solely because they were identified by an officer as being on probation or parole. Alameda County’s Santa Rita Jail is the fourteenth largest jail in the United States, and California’s prison system is the largest of any state. In Santa Rita Jail, it’s estimated that 55 percent of the prisoners are black. In the state prison system, 29 percent of inmates are black.

Reflecting the reality of a legal system with a disproportionate number of African Americans under some kind of court supervision, half of all adults on probation in Alameda County are black, and 29 percent of the state’s prison inmates released on parole are black, many of them residing in Oakland under the watch of the OPD.

For several decades now researchers have used stop data from all over the United States to test for racial profiling practices among police departments. The majority of studies show that, controlling for other factors, the race of a person influences why they will be stopped, and whether or not they will be searched and arrested. In other words, when it comes to policing, race matters in a way that harms non-whites, especially African Americans.

For example, a recent study by criminologists at Southern Illinois University and George Mason University lumped together the stop data from 27 different data sets to conduct a “meta analysis” to determine whether or not a person’s race influences a police officer’s decision to make an arrest.

“The research supports that race does factor into the arrest decision even when accounting for legal and other factors,” Tammy Kochel, one of the authors of the study explained to us in an email.

Earlier research on racial profiling has exposed the unequal treatment that non-whites, especially African Americans and Latinos, receive from the police. For example, a 2004 study using data collected through the Police-Public Contact Survey found the following:

“...young black and Hispanic males are at increased risk for citations, searches, arrests, and use of force after other extralegal and legal characteristics are controlled. Additional analysis show that minority drivers are not, however, more likely to be carrying contraband than are white drivers.”

As for OPD's recently released data, a Stanford team led by Dr. Jennifer Eberhardt is using the information to determine why there are such enormous racial disparities in Oakland.

So are Oakland’s police racially profiling? Or is the disparity due to factors beyond the control of the city’s cops, like the structural inequality of the courts and prisons, and economic problems afflicting the black community like unemployment and poverty?

For community organizers like Cat Brooks, there’s no need to wait on Stanford or gather more data. “I don’t think we need more research and more studies,” said Brooks, who is co-chair of Onyx Organizing Committee, in an interview. “It can’t be denied that black and brown folks are being profiled and targeted by the police.”

But Brooks also said the problem of police profiling isn't happening in a vacuum, and that in order to understand racial inequality at the hands of the law, we have to look beyond just the police. "We are looking at police racial profiling as if it’s an isolated piece of our society, rather than looking at it as one of many features of institutional racism that impacts black people’s lives everyday," said Brooks. "When you put it that way, of course black people are being profiled, the same way blacks are being pushed out, displaced from our homes,and locked out of job opportunities."