Before opening each Tuff Shed camp, the city conducted a census of unsheltered people living nearby. Here's what the data shows. 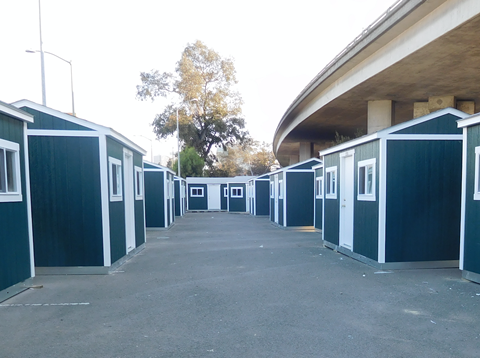 To address its homelessness crisis, the city of Oakland has established three Tuff Shed camps at which social workers help unsheltered people seek long-term housing while they reside in converted garden sheds. Mayor Libby Schaaf raised much of the money for the program from private donations.

Each of the three Tuff Shed camps opened near an already existing homeless encampment and in advance of their opening, the city conducted a “census” of the unsheltered people who live in the immediately surrounding area. After the city’s Tuff Shed camp opens, the nearby homeless camps are ordered closed, and camping is banned.

In order to better understand the impact of the Tuff Shed program, the Express requested copies of the city’s official census records. Here’s what the census records show.

The census for the Northgate camp reveals the severe racial disparity evident in Oakland’s homelessness crisis. Before the Tuff Shed camp opened, there were 101 homeless people who lived near the intersection of Northgate Avenue and 27th Street. According to the census, 90 of these people, or 89 percent, were Black. Seven respondents, or 6 percent of the area’s homeless residents, were Latinx, and three did not state a race. There was one white person among Northgate’s homeless.

The county’s official survey conducted last year found that 68 percent of Oakland’s homeless are Black, even though just 24 percent of the city’s total population is Black. 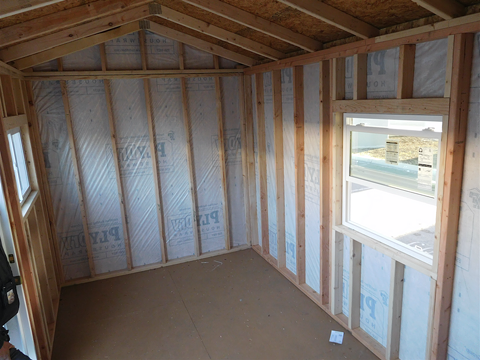 Every person in the Northgate camp told the census takers that they were “interested” in the Tuff Shed program. The Northgate Tuff Shed camp has room for 40 residents at a time.

The census information doesn’t show how many people who lived in the existing Northgate camp ultimately chose not to participate in the Tuff Shed camp, and therefore left the area to camp in another part of the city. In fact, the city hasn’t tracked this information for any of the three areas where it has opened Tuff Shed site and subsequently banned camping.

“Everyone on the list who was locatable has now been offered a space and has either decided to participate or not,” Lara Tannenbaum, the community housing services manager for the city of Oakland wrote in an email to the Express. “Expressing interest at the time of the census does not mean that all people chose to move in at the time they were invited.”

The Northgate site also expanded its “invitation zone” to include homeless people living on Martin Luther King Junior Way from 27th Street to Grand Avenue, Tannenbaum said. This means that there were ultimately more and different people who were offered a space in the Tuff Shed camp than the original census of 101 counted.

Similar census counts were conducted in the areas surrounding the Castro Street and Lake Merritt Tuff Shed camps before they opened, but these surveys don’t include the same amount of information as the one conducted for the Northgate Avenue camp. For example, the Castro area and Lake Merritt surveys do not provide information about people’s race, gender, time spent homeless, or interest in participating in the Tuff Shed program.

The Castro street census counted 45 people, while the Lake Merritt survey counted 72. The Castro area and Lake Merritt Tuff Shed camps can also accommodate 40 people at a time. Camping bans are being enforced in the surrounding areas.

Again, the census doesn’t track how many people chose not to participate in the Castro Street camp and therefore relocated to another part of the city.

The Lake Merritt camp just opened and city officials say they plan to phase in the no encampment zone around the lake starting first with the large camp that existed at Peralta Park next to the old Kaiser Center.

Some homeless people who lived across the channel from the new Tuff Shed camp are protesting the impending camping ban with signs reading “stop evictions now,” and “Homes: yes! Tuff Sheds: no thanks!” But others are taking the city up on the program and moving in.

As with the population that lived in the encampments around Northgate Avenue before the city opened its Tuff Shed site there, many living around Lake Merritt described a mixture of health problems and other barriers to finding stable housing.

For example, 24 people reported suffering from mental health problems and physical disabilities. 13 reported addiction to alcohol or narcotics. 11 had criminal records, which poses a major barrier to finding jobs and housing. 2 disclosed having HIV/AIDS.

These figures are similar to what advocacy organizations know about homelessness in Oakland, said Anita de Asis Miralle, program director at the Meiklejohn Civil Liberties Institute. According to de Asis Miralle, the disproportionate number of homeless African-American men is due to gentrification, labor market inequalities, and housing discrimination facing men of color. At the same time, there tends to be more shelter services available to women.

The Express also requested copies of the “exit matrix,” which tracks when and how homeless residents of the Northgate and Castro camps left the Tuff Shed program. The city’s goal is to help participants obtain transitional or long-term affordable housing.

According to the matrix, 75 people had participated in the Castro Tuff Shed camp as of Sept. 21, and 31 of them are still current residents.

Because the city’s original census of the Castro camp counted 45 people in the area before the Tuff Shed site opened, this means that 30 people participated in the program who weren’t part of the original census. This is because after exhausting its census list, the city expanded the “invitation zone” to a wider area.

So far, 15 people have exited the Castro camp into permanent housing. Another 17 have exited into transitional housing.

Five people abandoned their beds while seven people have been kicked out for violating the rules, but the matrix doesn’t describe the exact nature of the rules violations.

At Northgate, 52 people have been sheltered in the Tuff Shed camp. Seven residents have successfully completed the program and transitioned into permanent shelter, according to the city’s exit matrix. Five residents of the camp were kicked out for “violent behavior,” while four lost their spot after being arrested and incarcerated. Two people forfeited their spaces by abandoning their beds.

The remaining 34 residents who have taken part in the Tuff Shed program at the Northgate camp still live there.

Ultimately, the city’s census counts and exit matrix contain limited information about who was living in the areas where the Tuff Shed camps opened, who chose to participate, and who didn’t. “We do our best to capture all individuals,” Tannenbaum said about the accuracy of the census counts. “But certainly not all people will choose to share information to be placed on a census.”

The exit matrix also doesn’t contain details about what kinds of transitional and permanent housing a person obtained, and where it’s located. It’s unclear then how many of the Tuff Shed residents have been able to remain in Oakland and how many moved away to other cities in order to get housing.
Prev
Next