The public works department has failed to address larger problems with its sewers. And raw sewage continues to flow into waterways. 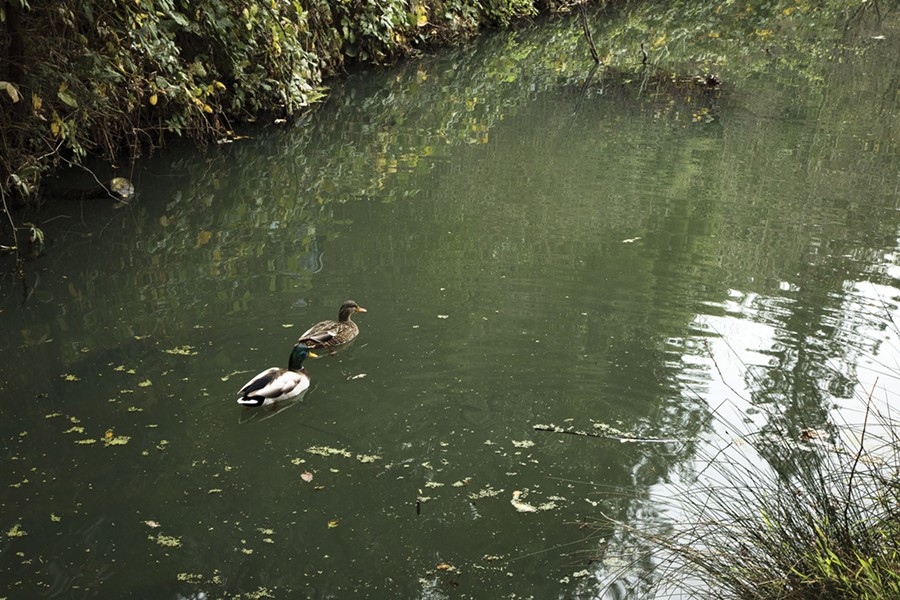 Last week, the U.S. Environmental Protection Agency and San Francisco Bay Regional Water Quality Control Board announced that the City of Oakland would be fined $226,500 for letting untreated sewage flow into San Francisco Bay over a roughly three-year period. Berkeley, Alameda, and Albany also received fines, as did the East Bay Municipal Utility District (EBMUD) and the Stege Sanitary District, but Oakland received the majority of the total $389,300 penalty.

The fines are in response to violations of a 2014 settlement that requires EBMUD and the cities to make upgrades to their 1,500-mile-long sewer system. The settlement, also called a consent decree, required Oakland to rehab more than 900 miles of aging sewer lines, implementing a $300 million action plan over 22 years to systematically repair its leaky sewer pipes. The city is also required to alert the public when there's a large spill or incident that could affect a person's home or business, report sewage overflows, and annually submit a report detailing its progress in meeting the action plan to regulatory agencies and the parties in the lawsuit.

Despite the fine, public works officials have repeatedly stated that Oakland is in compliance with the settlement and that penalties are inevitable. "We knew heading into the consent decree that we could not eliminate these issues overnight, and we knew some stipulated penalties would be unavoidable," Oakland Public Works spokesperson Sean Maher wrote in a statement. "We are continuing to make improvements to our system and our own best practices, and we hope to reduce those penalties over time."

But the public works department appears to be downplaying issues with the sewer system. According to official documents filed with the California State Water Resources Control Board by public works supervisors, more than 70,600 gallons of sewage have flowed into local waterways just since Jan. 1. This includes three particularly large spills: More than 2,000 gallons into Lake Merritt, close to 19,000 gallons into Temescal Creek, and more than 31,200 gallons into Arroyo Viejo, which flows directly into the bay. Water quality samples were taken at Arroyo Viejo, but not at the lake or creek, which are both close to popular sites for recreation. Oakland's public works department said it properly alerted the public about these spills, but it has a history of failing to adequately inform the public when overflows occur, especially around waterways, and often does not test the water for dangerous pathogens following the spill.

As we reported earlier this year, the city has failed to report hundreds of thousands of gallons of sewage spills, failed to alert the public about raw sewage flowing into waterways such as Lake Temescal and Lake Merritt, and continued to hire a contractor to fix broken sewer lines, even though the contractor has a record of shoddy work.

Water board officials confirmed to the Express last week that an investigation into Oakland's documentation of sewage spills is ongoing, and more penalties could be coming.

After our story was published, Councilmember Dan Kalb, who chairs the Public Works Committee, requested a report from the public works department on the city's sewer system and an examination of evidence that the city submitted official reports to state and federal regulators that contained false information about sewage spills. On Tuesday, the department was scheduled to present its findings — just hours after the EPA announced its fines.

But during the nearly hour-long presentation, Public Works Director Jason Mitchell and department supervisors failed to address the issues brought up by our reporting. Instead, they detailed the history and construction of the sewer system, as well as the current work being done on it. They also failed to mention the fines from the EPA until they were pressed by councilmembers.

Though the department was given nearly four months to complete the initial report, Mitchell asked the committee for more time to address the questions brought up during the meeting. He also reiterated that the public works department still plans to hire an outside consultant to investigate internal issues and recommend best practices — a commitment the department made in January — but did not provide a timeline for implementation. (But after the meeting, Maher said the department has selected a consultant and is in the process of finalizing the scope of their work.)

A supplemental report has been scheduled for mid-June, and Councilmember Kalb has asked that, going forward, updates be presented annually. But the presentation left many feeling unsatisfied with the department's response.

"I don't feel that the report addressed the major concerns," Councilmember Rebecca Kaplan said after the presentation. "The fact that they tried to make it sound like everything is going great and, on top of the fact that we got this big fine from the EPA, it does make me worry that the administration is trying to hide the magnitude of the problem with our sewer system — which appears to still be significant."

Terry Tobey, an Oakland resident who recently filed a lawsuit against the city after accusing the public works department of failing to fix broken pipes that leaked raw sewage and dangerous root-clearing chemicals onto her property, said she was also disappointed by the lack of response from officials. "It was useless and a waste of time. I didn't hear anything that sounded like they were taking responsibility," Tobey said about last week's meeting. "They won't admit anything. This was a joke — an absolute joke." Tobey alleges that aging pipes around her property leaked dangerous tree root-clearing chemicals, injuring her horses and dogs and wreaking havoc on her property, and that the problems have continued.

Department officials have contended that their reporting on overflows was accurate, despite the inconsistencies uncovered in their documents over the past year. Public Works Operations Manager Tyree Jackson told the committee that most changes are negligible and are required of supervisors to ensure more accurate reporting to regulatory agencies.

But sewer workers told the Express that their in-field reporting is often vastly undercut by senior officials, at times reducing the number of gallons of sewage overflows by tens of thousands.

A series of emails between city staff and the East Bay Regional Park District obtained by the Express showed that Jackson knew of an ongoing spill at Lake Temescal back in January 2017, and documented the start time a week after it had begun, listing only 36,000 gallons — one-third of the actual amount that had likely leaked into the lake. In fact, the listed start time on the document made it seem as if the spill began after the agency was made aware that it was occurring. Mitchell and Jackson did not respond to repeated requests for comment, but Maher said the department is planning to evaluate the claims and provide clear documentation about the accuracy of their reporting with the supplemental report in June.

While the department continues to state there are no problems with its documentation, Oakland has underreported sewage spills in the past. In 2011, the San Francisco Bay Regional Water Quality Control Board fined the city $114,000 after it found that the city falsified the start times of sewage overflows and underreported the volume of sewage released.

Erica Maharg, the managing attorney for San Francisco Baykeeper, an environmental organization that is party to the consent decree, was at last week's committee meeting and pushed the council to do more to investigate the claims made by the public works department and ensure accurate reporting of sewage spills in the future.

"I appreciate the Public Works Committee interest in the City's efforts to reduce raw sewage. But I was disappointed that City staff did not include any information addressing the serious reports that the City has misreported or underreported sewage spills," she wrote in an email following the presentation. "The City - led by City Council - should thoroughly review these reports. The public must be have [sic] confidence in the City's reporting of sewage spills that impact the Bay and public health."

Her concerns were shared by councilmembers, who tried to press public works officials for more information about both the EPA violations and the inaccuracies in sewage documentation.

Kaplan and Kalb requested more information from the department about the problems and allegations in a supplemental report due in the coming months. "We are not done working to fix this," Kaplan added.

Kalb echoed her concerns but said he is more interested in ensuring that the department improves its practices so future problems are mitigated, rather than focusing too heavily on past issues. "I can't go back in time, so I am concerned about what we are going to do now through the next few years and beyond, to make it less likely to get a fine in the future," he said. "We are trying to do more." 