Justin Eichenlaub and Kelly Gregory have built an enterprise on traveling via bike, bus, and train. 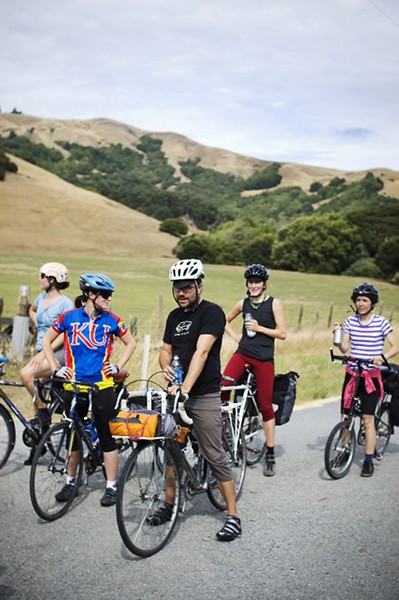 Justin Eichenlaub and Kelly Gregory may or may not have fallen in love while bicycling. There's some debate as to whether it happened on a train ride following a bike ride. But it's a safe bet that the couple, who met as friends via a Craigslist post Eichenlaub placed three years ago regarding a four-day trip to Monterey, can trace their roots directly to one of the above. They've since turned their passion for car-free travel via bicycle, public transit, and foot into a business aimed at un-cluttering our cities, easing our reliance on fossil fuels, and increasing our enjoyment of weekend jaunts.

The core of the enterprise is Post-Car Press, an Oakland-based publishing entity (the couple, both in their late-twenties, share an apartment near Lake Merritt) that produces practical guidebooks geared toward what Eichenlaub and Gregory call "post-car adventuring." The idea is to share routes, advice, and practical tips on completing short trips — usually within no more than a few hours of home — without the aid of a personal vehicle. Post-Car Adventuring: San Francisco Bay Area, the duo's first book, features detailed directions for eight outdoor recreation destinations, arranged in increasing level of difficulty or distance travelled: West Marin, Samuel Taylor State Park, Mt. Diablo, Napa and Sonoma, Tahoe, Big Sur, Yosemite, and Tassajara Hot Springs in the Big Sur backcountry. Each index-card-size, pull-out page aids readers in getting from their home anywhere in the Bay Area to the front door, so to speak, of wherever they're headed — and that means using trains, buses, and bikes with equal abandon.

"There's really not any other book or guidebook that incorporates transit to this degree," said Gregory. "There's a lot of cool bike-touring books, but you start from point A, which is always outside of the city. So it assumes you drive to Point A, and then go on the trip." The goal of the Post-Car Adventuring series is to bridge that gap between rural bicycle routes and urban bus maps, proving that most middle-distance adventures don't require cars at all — and can often be much more rewarding without them.

A sentence in the 28-page book's introductory paragraph presents Eichenlaub and Gregory's philosophy succinctly: "Post-Car Adventuring is about gaining things rather than giving them up." They cite inspiration in environmental philosopher Kate Soper's term "hedonistic environmentalism" — a frame of mind, they write, where "human happiness and comfort are key ingredients of environmental ethics and action."

But what the book never addresses is the authors' attitude toward cars — a position, one would imagine, that's implicit in their enterprise's very name. This was partly by choice: The book's first edition, 200 copies of which were printed and sold in 2009, contained some anti-car language that they decided to remove for the revision. "Part of me wants to put that back in there," Eichenlaub said. Ultimately, however, he believes the book is better off without it.

"Post-Car is a chance to think beyond the normal anti-car propaganda stuff," he said. Part of the reason for this is that the guidebooks' primary audience, he feels, is city dwellers who do own cars and may be predisposed to do without, but are wary to give them up precisely because they believe regional trips like these are unattainable or impractical without a vehicle. The underlying motivation for Eichenlaub and Gregory is convincing people like this that they don't need to hold on to their cars for weekend trips to Yosemite or Napa, which in turn could help reduce the number of vehicles cluttering urban centers. Environmentalism, interestingly, takes a backseat.

"One of our main goals is reducing the number of cars that are in the city," Eichenlaub explained. "At the end of the day, the carbon emission savings are useful, but they're not as useful to us as the social costs and personal costs in an urban environment." Fewer cars make the city a more livable place, reduce traffic and accidents, and open up the streets to pedestrians and bicyclists, he said.

It's a lofty vision, and one that must overcome serious obstacles. For starters, most people are wary of using transit when they can otherwise drive because of the apparent increase in travel time. Eichenlaub stresses that this perceived difference is not always accurate — and that in some cases, biking and transit can actually be quicker — but it's nonetheless a significant mental hurdle. Likewise, for car owners who are already paying for insurance, registration, and repairs, the amount of gas money required for a hundred-mile drive is miniscule compared to a train ticket. Other considerations include participants' physical fitness, bicycle gear, and comfort level with road riding — though again, Eichenlaub and Gregory insist they're all easily overcome, especially when the benefits of going car-free are factored in.

"A lot of our friends own cars, but they ask us about doing this and they start doing it on their own, too, and they leave the car at home even though it's cheaper," Eichenlaub said. "Especially for a trip like Yosemite. If you're just going to the central village there, why would you want to drive? Especially in the winter. ... I think there's an appeal to it."

Gregory agrees: "I'm just so obsessed with Amtrak. It's the nicest thing ever. I'm able to write things, and I'm able to think about things. I really love sitting on Amtrak. ... We've really gained a strong appreciation of different landscapes, by biking and also by taking the train."

Production of the second-edition Post-Car Adventuring: San Francisco Bay Area book was funded largely through a Kickstarter campaign the duo launched last summer from Green River, Utah, where Gregory, an architect, was working at the time. They raised $6,500 to cover the cost of printing 1,500 copies, an endeavor bolstered by the fund-raising platform's directors, who included Post-Car Press in a mass e-mail highlighting their favorite campaigns. Their account quickly swelled past $2,000 from family and friends to $6,500, aided by a $650 pledge from one donor in New York who had never met or even spoken with them. That convinced Eichenlaub and Gregory that they were on to something — something that touched a nerve with regular people across the country. The new book, sold through Oakland's AK Press, can be found in small shops throughout the East Bay, including Walden Pond Books in Oakland, all three Pegasus Books locations, and Moe's Books in Berkeley — not to mention on Amazon.com.

Future guidebooks covering Los Angeles, Seattle, New York City, and Green River, Utah, are in early planning stages, with assistance from friends and fellow post-car adventurers across the country. The company will even be able to pay contributors. Thanks to the successful Kickstarter campaign, Post-Car Press is now a self-sustaining business. "We have the capital to invest in a new book, get it printed, and get the money back from that," Gregory said proudly.

Beyond books, the two hope to someday expand their Post-Car Industries umbrella to include a car- and plane-free travel agency as well as a bike-centric design service for car-free garages. It all traces back to that central credo: "gaining things rather than giving them up." While most anti-car and environmentalist rhetoric — especially in the arena of carbon emissions and global warming — focuses on the latter, Eichenlaub and Gregory have adopted a more holistic urban planning approach that is rife with potential: "We're really interested in that bigger picture," Eichenlaub said, "and what it actually means toward quality of human life."