Paul Schneider says he’d been working toward opening his dream business for about fifteen years before he finally found the perfect spot — a building in Oakland’s Laurel district that he was able to buy for a surprisingly low price.

Schneider’s plan is to combine all of his passions: A general contractor by trade, he wants to turn the space currently occupied by the Nigerian eatery Miliki (3725 MacArthur Blvd.) into the Laurel Beer Garden. And in the former hair salon next door, he’ll set up a brick-and-mortar home for his chocolate business, Bramosia Chocolates, which up until now has only sold products once a year, at the Dickens Christmas Fair at the Cow Palace in Daly City. What he’s calling a “chocolate gelato cafe” will also offer a full coffee bar and Italian-style gelato, which Schneider learned to make in Milan.

The only problem? The owners of Miliki don’t want to leave. But when push comes to shove, it doesn’t appear they’ll have any choice. This is the reality of today’s Oakland: The fulfillment of one restaurateur’s lifelong dream sometimes means that someone else gets displaced.

In a phone interview, Miliki co-owner Ismael Okunade told me that the Nigerian restaurant’s lease expired last summer, right around the time that Schneider purchased the building. Initially, Okunade said, Schneider seemed open to keeping Miliki on as a long-term tenant and simply running his chocolate and gelato business in the smaller space next door. But it seems that Schneider eventually had a change of heart, and by October he was telling the proprietors of Miliki that he needed both sides of the building, and that they would need to vacate the premises by May, Okunade said. That deadline has since been postponed due to permitting issues that have delayed the beer garden project. 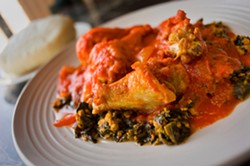 Not everyone in the neighborhood is happy about the arrival of a new beer garden, especially since it’s coming at the expense of Miliki. Adam Jordan Wills, a Laurel resident, sees Miliki as a major part of the diversity that makes the neighborhood such a vibrant place to live. And Wills noted that Miliki has a social and cultural significance that runs much deeper than your run-of-the-mill restaurant. Not only is it the only Nigerian restaurant in Oakland (and possibly the entire Bay Area), it’s also a lively gathering place for West African immigrants and one of the only places in the area where you can go to listen to live African music.

For Wills, the displacement of Miliki fits an all-too-familiar narrative: “I feel like somebody parachuted into the neighborhood and is gentrifying it without any research.” Add to that the fact that Miliki’s owners put a tremendous amount of “sweat equity” into the restaurant, essentially building the space out from scratch back in 2009 — hard work for which they’ll no longer reap the long-term benefits. And what makes it worse, in Wills’ view, is that the Laurel is already getting a new beer-related business just a half-mile away: Degrees Plato, a taproom and bottle shop that’s taking over a blighted building at 4251 MacArthur Blvd.

So, Wills has decided to protest: He set up an online petition, which concludes, “Help save a family business. Stop the homogenization and gentrification of a great diverse place.” So far, 396 people have signed.

When asked directly about the perception that he’s displacing a beloved local business, Schneider said he feels torn about effectively kicking Miliki out — and that he’s trying to give Miliki’s owners as much time as possible to find a new location so that they don’t have to close outright. At the same time, Schneider said he can’t operate the business he intends to operate as long as Miliki is still there.

As for that age-old narrative of big money pushing out the little guy, Schneider said: “I wish I was big money. I’m doing this on a major shoestring.” And he said he doesn’t intend for the beer garden to be some high-end, “only-if-you-can-afford-to” business. Art Napala, the chef he’s bringing in, is a fellow Dickens Christmas Fair veteran who specializes in fish and chips. Schneider plans to serve about twenty beers on tap, all sourced from within a hundred miles of the restaurant, if possible. And he hopes to put in some skylights to make the restaurant feel like a welcoming, community-oriented place. If all goes well, he would like to open the beer garden portion of the business in about seven months. The chocolate shop would come later on.

In the meantime, Okunade said he has already started looking for a new location for Miliki, but Oakland real estate has, as we all know, gone haywire. “It’s very, very expensive,” he said.