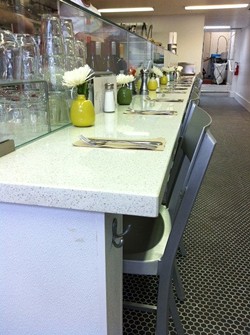 In the two years since Oakland’s Grand Lake Kitchen (576 Grand Ave.) opened its doors across the street from Lake Merritt, the neighborhood deli has garnered a reputation for excellent sandwiches, a small but well-curated grocery section, and one of the biggest, most sidewalk-clogging weekend brunch crowds in town.

Good news for those who have happily braved that line: The restaurant will soon expand into the vacant 1,200-square-foot space next door, a former nutritional supplement shop, and should be able to double its amount of indoor seating as a result.

According to co-owner May Seto Wasem, the upshot will be shorter wait times during Grand Lake Kitchen’s busy lunch and brunch rushes, and more room to accommodate dine-in customers during dinner service, when the patio seating area offers less appeal. Currently, the deli only has a handful of two-tops inside, in addition to a long diner-style counter.

In the reconfigured Grand Lake Kitchen, the indoor dining area will occupy the new space, allowing the restaurant to install a walk-in cooler to its existing kitchen area — an addition that will enable the restaurant to expand its menu offerings. The new incarnation of the restaurant will also have a full bar.

“It will be more comfortable,” Seto Wasem said. “Right now people are on top of each other — both the servers and the customers.”

Construction should start in early 2015, with the restaurant closing for two or three weeks before the new-and-improved version opens in May or June.

But Grand Lake Kitchen is wasting no time in putting the new space to use: The restaurant will host a holiday gift bazaar in the vacant store during the two weekends before Christmas — December 13–14 and 20–21. Local crafters, jewelry makers, and small-scale food artisans will be on hand to sell their wares, with proceeds benefitting the Alameda County Food Bank.