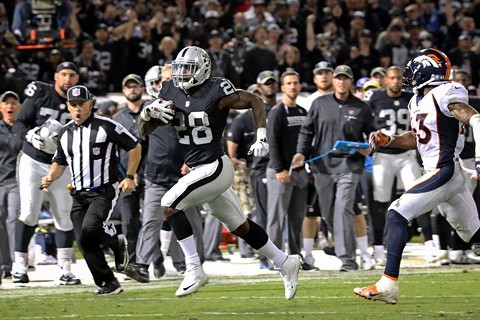 Silver and black was the new orange last night as the Raiders defeated the reigning champ Denver Broncos.

With the 30-20 win, Oakland now claims sole possession of first place heading into its bye week.

The team's dominance of the Broncos on both sides of the ball should silence the cacophony of Raider naysayers in the national media. The showdown was also a primetime Sunday Night Football matchup, something the Raiders haven't experienced in years. Or, when they had, they'd been dismantled (think Brett Favre after his father passed).

So, the takedown of the Super Bowl victors was perhaps the franchise's most critical statement win in a decade: a beginning-to-end, old-fashioned Raider domination win, done in the trenches, and against its No. 1 rival.

In a breakout game for its backfield, Oakland rushed for 218 yards.

And the defense, which basically has basically been a lit fart when it comes to stopping the run or defending the middle this season, held the Broncos ground game to just 33 yards.

Oakland also exhibited unprecedented discipline — only eight penalties and a couple bonehead plays. The team also owned time-of-possession (41 of the games 60 minutes), a true mark of a patient and confident offense.

But Raiders gonna Raider, as we've learned this season.

What's noteworthy about this latest home conquest, which brings the Raiders to 7-2, is how Oakland straight-up overwhelmed the champs during a quasi-high-stakes matchup.

The defense opened the game with four-consecutive three-and-out stops.

Denver's offense resorted to hopelessly airing the ball out early in the game, and the Donkeys' celebrated defense had no answer for the Silver and Black's diversified attack.

The evening was also a statement for a coalition of local fans hoping to keep the team in the Bay. Hundreds brought "Stay in Oakland" signs to the Coliseum, and hung banners in the parking lot proclaiming that, if owner Mark Davis builds a stadium in Las Vegas, they won't come.

Indeed, the NFL is now in a bind. Yes, there exists 750 million reasons to relocate the franchise to Sin City. But every NFL owners watched this Sunday night game on NBC — a sold-out bout featuring a passionate stew of fans inside the rundown Coliseum bowl. These billionaires aren't all heartless, and it will be difficult for them to pull the plug on that kind of loyalty, especially in this "high-stakes" (read: lucrative) Bay Area media market.

But back to the game. Some highlights and observations:

1. I was concerned early about missed opportunities — Seth Roberts slip that cost the Raiders a first-and-goal, Sebastian Janikowski's shanked field goal (again!). But the team showed poise and continued to grind over Denver despite early hiccups converting in the red zone.

2. Von Miller broke through first, with a beastly sack of Carr on a third down. But Khalil Mack won the battle of the pro-bowlers, what with his two sacks of Trevor Siemian, including a strip-sack in the fourth quarter that essentially sealed the win for the Raiders.

3. The Raiders' born-again defense started the game where it ended off in Tampa Bay, with four-straight three-and-out stops on Denver's opening possessions. Backed by the loudest Coliseum crowd since the game four of the 2013 ALDS series, the D executed unlike any other moment this season. Wha happened!?

4. But ... the Raiders also gave up some big plays. The first, a bomb to Demaryius Thomas, was eventually was ruled a drop — but it could have cost the team. It also exposed the liability that is T.J. Carrie. Yet the Broncos never went after Carrie subsequently. And to the team's credit, Siemian completed less than 50 percent of his passes.

5. The offense stalled out of the gates in the third quarter, and it looked that Denver might have a window to sneak back into the match. That said, the team exhibited championship poise — yes, championship — by locking down and disallowing a balanced Bronco attack to manifest in the second half.

6. On the fourth-quarter drive that resulted in Latavius Murray's third TD of the day, the Bronco DBs committed at least three pass-interference penalties. At one point, two of my friends (Denver fans) texted me to complain that the NFL was rigging the game to ensure an Oakland win — and give owners a reason to vote to keep the team in the Bay. Talk about tin-foil hats!

7. Anyway, it's worth pointing out that the Denver secondary did indeed bail the Raiders out on multiple occasions in the second half. And, to that end, there were more than a couple head-scratching goal-line pay calls by Bill Musgrave and Co. (those back-to-back out routes!)

8. Let's look back a few weeks ago, to the last Raiders last home game, when they were blown out by the Kansas City Chiefs. It was a shit day, and it felt like Mother Nature wanted the Raiders to move to Las Vegas: After another week of bad news for loyal Oakland fans, the team lost to the visiting Chiefs in a miserable, rain-soaked blowout — and it was a sunny, 83-degree day in Sin City.

Kansas City's schemes were far superior to those of the Raiders that afternoon, and the take-home was that the team lacked discipline, the coaches were more buddies than bosses, and the Silver and Black wasn't ready for the postseason.

Specifically, critics said that the team couldn't stop the run, gave up more big plays on defense than leaks in the Coliseum, didn't own the middle of the field or the trenches, and needed a couple more pieces on offense (a tight end and, because Murray was hurt that game, a run attack).

During the game, Carr hoisted an ill-advised freebie interception right out the gate, which led to a Chiefs touchdown to tie the game in the first quarter at 7 to 7. Was Carr regressing?

Washington and Cooper were slipping and sliding in the midfield mud, and didn't really have an impact in the second half. Could the big two be shut down so easily?

And the Chiefs benefitted early from favorable field possession, due to dumb coaching moves by Del Rio and Co., which they translated into two touchdowns. The Chiefs run attack also dominated.

Now, Murray is back and dominating the Raiders' three-headed-backfield monster. Carr is poised and looking like a seasoned veteran. The coaching staff has a achieved a unique Nation Zen, what with its truly Oakland blend of Black Jack Del Rio grit and risk, and classic run-pass attack.

But the best part is that the Raiders are acting as if they've been there before — even though it's been a helluva long time since an Oakland squad has performed anywhere near this level.

In the locker room after the big win last night, the mood was upbeat but by no means celebratory. Michael Crabtree left early, as usual. The guys dressed and hit the road in a very business-as-usual way, no loud tunes bumping or exhalatory shouts and high-fives. Del Rio took the podium and exhibited his typical level-headed nonchalance. It's like the Raiders actually get it: