The city's current budget season has become a veritable kabuki of familiar players and conflicts. 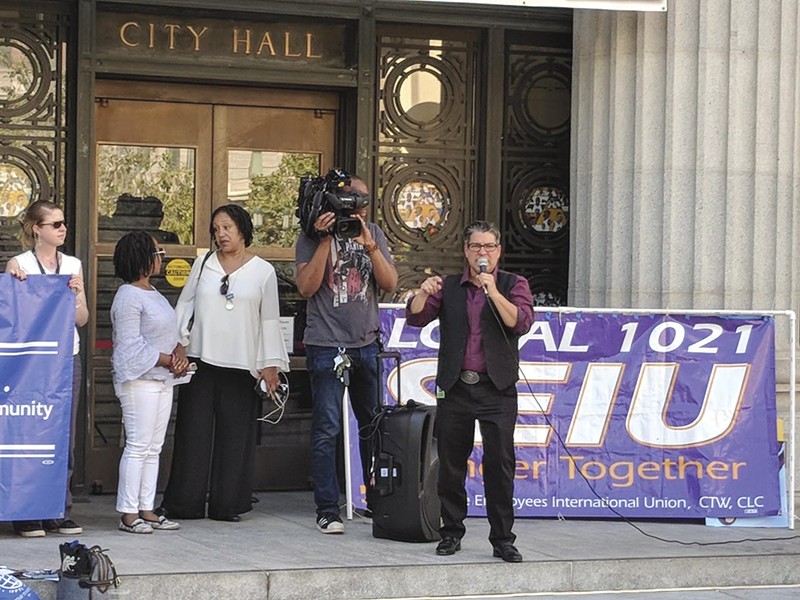 When the California economy booms, cities like Oakland are structurally condemned to fall behind in providing public services. Costs increase in typical coastal fashion, but the tax revenues to provide them fall behind.

The root of this problem is both frustratingly simple and impossibly complicated: Proposition 13 hinders the ability of cities to reassess taxable property values at market rate, particularly for commercial properties. Since 1999, retroactive state pension payments have surpassed the returns on the investment of those funds, leaving cities with ballooning retirement costs. Consequently, public employees tend to be the hardest-hit by recessions, and the slowest sector to recover.

Oakland's city leaders painfully remember the last recession, when massive layoffs in 2009 directly followed a $6.8 million expenditure on salary increases the previous year. At the same time, labor unions know all too well that city salaries and staffing levels did not fully recover from the Great Recession.

Mayor Schaaf's budget proposal, introduced last month, anticipated major deficits stemming from rising costs, and pared back on some services, such as parks maintenance. Her lean proposal was countered by Kaplan, who increased funding for some services in line with activist and labor union priorities and cut spending on projects and departments closely affiliated with Schaaf. Critics blasted Kaplan's proposal for perceived pettiness, while the city's Finance Department gave it poor marks for various errors indicative of a rushed job.

The city has been here before, and absent any major reforms in how California finances public services, the whole cycle will likely repeat again.

Oakland's Finance Department delivered a searing rebuke to Kaplan's proposal last week, blasting "myriad deficiencies, illegalities, and errors" in the proposal including "fictitious revenues" and proposals "illegally siphoning" funds from specific ballot measures to other services. Aside from technical errors and overt optimism, Kaplan's plan also drew the ire of transportation safety advocates for its proposal to merge the Department of Transportation back with the Department of Public Works, though Kaplan withdrew this proposal after council pushback. As part of this merger, Kaplan proposed reallocating affordable housing funds from the Measure KK bond to street paving in Public Works, which the Finance Department claims violated the terms of the ballot measure.

The Finance Department criticized instances where President Kaplan counted cost reductions as extra revenue, estimated increased scooter and parking fees beyond what the city administrator's office expects it can feasibly collect, or simply projected for property tax and sales tax revenue than previously estimated. The report also dismissed major cost reductions proposed for the Police Department as unclear or too difficult to implement within one budget cycle.

The bad blood was boiling after the Finance Department's report. Union representatives felt that its dire predictions of layoffs from Kaplan's budget were an intimidation tactic, rallying before Monday's city council meeting to support the alternative proposal and denounce what they called Schaaf's "immoral" budget. Kaplan assured the crowd that no such layoffs would occur. But Kaplan herself was caught off guard by the Department's harsh rebuke.

Kaplan pushed back on Schaaf's priorities. With stagnant revenues in its special tax district, Schaaf proposed freezing 8.5 unfilled full-time positions for parks maintenance, freeing up roughly $1 million per year. Kaplan, in turn, proposed cutting $1 million in spending across two years for the Oakland Promise, Mayor Schaaf's college scholarship fund that is in the process of moving to nonprofit administration.

This spat between executive and legislative branches emboldened the advocacy appetite for several budget priorities, namely labor's continued efforts to increase full-time salaries and fill vacant positions. Representatives of major city employee unions, particularly SEIU Local 1021 and IFPTE Local 21, have been pushing for staffing and salary increases, and Kaplan's amendments deliver. An additional $7 million invested in labor per year would constitute a 4 percent annual salary increase for most city employees.

"Oakland workers experienced furloughs for 6 years, and the City balanced its budget on our backs during the recession," said Jennifer Li, spokesperson for IFPTE Local 21. "But after Oakland bounced back, city services were never fully restored." Li saw Kaplan's amendments as a "step in the right direction" to address citywide civilian staffing vacancies that exceed 20 percent in some departments.

Even critics of Kaplan's budget shared concerns about staffing. Liz Brisson, a member of the advocacy group Transport Oakland, said she was "happy to hear" that Kaplan had withdrawn her proposal to fold the Department of Transportation, but added that its slow work progress was more due to staffing shortages than bureaucratic confusion.

Affordable housing goals may also get sidetracked by this budget battle, as Kaplan's proposal included a reallocation of impact fees paid by market-rate developers, from affordable housing to homelessness services, that the Finance Department dismissed as improper. East Bay Housing Organizations, a member of the ReFund Oakland Coalition that rallied in front of City Hall on Monday to demand increased spending in city services, has asked that the city spend nearly twice the amount proposed in Schaaf's budget on affordable housing, from $55 million to $90 million.

"Nonprofits don't have the deep pockets to compete against market-rate developers," the group's lead organizer Dolores Tejada said. "Any money we get locally can be leveraged with state and federal subsidies." Representatives further argued that the city should allow for reallocating impact fee revenue to supportive services for the homeless, to address the city's housing crisis. Since half of the impact fee payment is due when permits are issued, and with 3,587 units permitted in Oakland last year, advocates continue to insist that more subsidies can be budgeted.

Kaplan's proposal allocates another $7 million each year from anticipated impact fee revenue, which Schaaf's proposal did not account for, and $45 million over two years from "property sales and leases." The Department highlighted that $45 million as sparking particular concern.

But as rising pension obligations and dire service needs raise the city's costs, Kaplan faces the same political pressure as Schaaf to trim the fat and bring revenues in line with expenditures.

On the other hand, Schaaf will face political pressure to spend more on staffing and housing and tighten oversight on police overtime pay. At a town hall meeting on May 20 hosted by Make Oakland Better Now, the mayor declared: "I do not think there is any area of public service that is adequate today."

Kaplan's gambit is to flip longtime rival Schaaf's fiscal caution on its head: her revenue allocations seek to account for a historic pattern of under-estimating revenue, which critics say has made the Mayor's discretionary spending more oblique.

"For almost a decade, the City of Oakland has consistently under-projected revenue by large margins, and starved city services," Jennifer Li said. "Per the City's Comprehensive Annual Financial Reports, since fiscal year 2011-2012, the City has under-projected its operating revenues by an average of $45 million each year." Li said that the so-called "fictitious" revenues were merely correcting a pattern of underestimating tax revenues in previous cycles.

Metaphysically, all tax revenues are fictional until they are collected. The policy debate Oakland's city council will need to resolve by the end of the month is a matter of saving for the winter versus making hay while the sun shines. And while Li and other labor leaders charge that lower revenue estimates allow the Mayor to scuttle away surplus funds for "pet projects," the city's workforce would be the hardest-hit if and when the good times dry up.

Jim Blackman, speaking before the council on behalf of Make Oakland Better Now, lamented that some of Kaplan's expenditure reductions appeared to be "double-counted" as extra revenue. "We don't have confidence that we have the time to compare these budgets side by side to figure them out," Blackman said. To wit, the council adjourned on Monday with no conclusive vote.

Veteran political observers often note that the roles in Oakland's budget drama are practically pre-scripted by political incentives. "Until we decide to fix how we fund the local government, these budgetary fights will continue to happen every cycle," said political consultant Nathan Stalnaker. "There will always be worthy initiatives that we want to fund and not enough money to do so. The unfolding political process will answer the question: will we be responsible with our funds when times are 'good,' or will we spend every last dollar?" 