For the past year, students in Oakland have been getting something a little bit different on their cafeteria trays on Thursdays — not frozen pizza or a prepackaged burrito assembled in a factory several thousand miles away, but a healthy meal made entirely out of California ingredients: a baked chicken leg seasoned with lemon and oregano, or a yakisoba noodle bowl with tofu.

The meals are part of California Thursdays, an initiative of the Berkeley-based Center for Ecoliteracy that the Oakland Unified School District has been piloting for the past year. With its catchphrase, “California food for California kids,” the program features school lunches made with ingredients that originate in California and are cooked fresh in the district’s kitchen facilities.

For Oakland, the initiative has been an ambitious undertaking, requiring the district to reexamine its not-always-transparent ingredient supply chain; retrain its kitchen staff; and develop healthy, appealing recipes that are still practical within the context of the roughly 20,000 lunches that the school district has to serve each day. By April of this year, the district had deemed the meals enough of a success to go from serving them once a month to every week. With the help of the Center for Ecoliteracy, OUSD has now developed seven California Thursdays recipes that the schools rotate through from week to week, food service director Jennifer LeBarre explained.

In a state as famous for its agricultural bounty as California is, it's easy to assume that sourcing high-quality local ingredients would be a simple task, but the program’s organizers say implementation has been nothing if not challenging. As the Center for Ecoliteracy’s Adam Kesselman put it, “School food is complicated, especially on a scale as big as Oakland.” 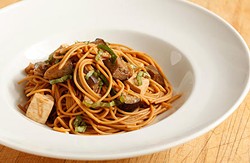 Indeed, as much as reformers would love for OUSD to buy all of its ingredients from small independent purveyors, for now that remains a distant prospect. For starters, there are daunting budgetary constraints. Alexandra Emmott, the district’s Farm to School Supervisor, noted that the district can only spend $1.15 on each meal it serves — an amount that needs to cover the cost of an entrée, a fruit or vegetable, and milk.

Given those constraints, it’s a minor miracle that Oakland schools have been able to start offering Mary’s Free Range chicken legs twice a month, as part of the California Thursdays initiative. An affordable source of antibiotic-free California beef, on the other hand, is a riddle the district is still trying to crack, Emmott said.

Even if money were no object, the district is still contractually obligated to buy the vast majority of its food from the mega-distributor Sysco. When Emmott finds a local, mom-and-pop farm that OUSD wants to work with, she has to help the farmers jump through a host of necessary hoops — i.e., to sign them up to be Sysco suppliers so that Sysco, acting as a middleman, can sell their produce back to the school district.

Perhaps the biggest obstacle to school lunch reform in Oakland is the district’s facilities limitations. Because only thirty of the district’s 85 schools have functioning kitchens, the remaining schools depend on daily deliveries from two overburdened central kitchens. LeBarre explained that this setup adds several additional steps to the process of, say, prepping and cooking raw chicken — an undertaking that the district has taken on for the first time in more than a decade. According to Kesselman, the current delivery system also makes it more difficult for students to even know about California Thursdays, since those meals come in the same plastic-wrapped paper trays as all of their other school lunches.

For now, the district doesn’t have a lot of data to quantify the program’s success — statistics on how many students are opting for the California-sourced entrées on Thursdays, for instance. (In Oakland, the California Thursdays initiative is currently limited to a single lunch entrée each week; students still have other meal options.) And of course it’s too early to draw any conclusions about the initiative’s longer-term health impact.

Still, for school lunch reformers, the California Thursdays initiative represents a step in the right direction — especially now that it is expanding its reach across the state. Both Emmott and Kesselman pointed out that there are also clear economic benefits to the program. For example, OUSD now buys approximately $20,000 worth of chicken each month from Mary’s, which is based in Sanger, California.

“The revenue of that stayed in California,” Kesselman noted. He said other local farms stand to benefit as OUSD and other participating districts start to buy more of their ingredients within the state.

Thanks to a bond measure that passed in 2012, granting the district $44 million for school kitchen upgrades, OUSD will soon have much-improved cooking facilities, too. This summer, four Oakland schools will receive significant kitchen upgrades. Even more crucially, construction will begin on a new central commissary kitchen in West Oakland that should be ready to open by the start of the 2017-18 school year, LeBarre said.

At that point, the district should move a step closer toward its ultimate goal: to serve healthy meals made with high-quality California ingredients all the time, not just on Thursdays.