After overspending on administrators and consultants, the district is proposing to slash $15 million in order to avoid the second state takeover in 14 years. 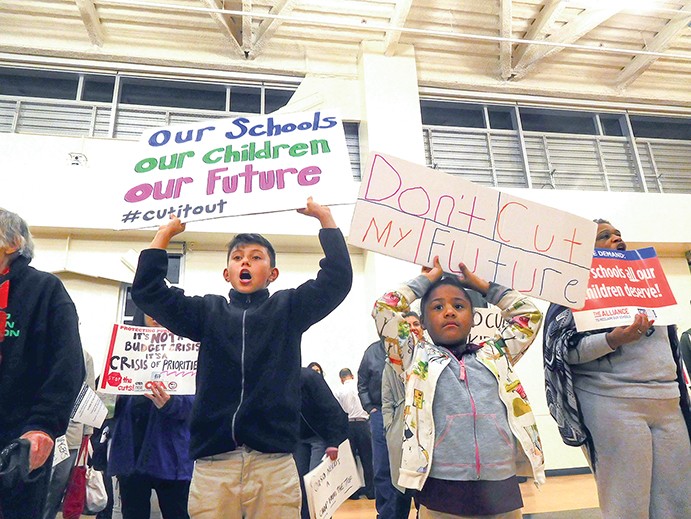 When Antwan Wilson took over as Oakland Unified School District superintendent in 2014, the school board hailed him as a leader who would bring back stability. In a press release, the board stated that it was "most impressed by [Wilson's] work in reinvigorating troubled schools."

But stable he wasn't, and trouble has returned. Wilson unexpectedly resigned last school year to become chancellor of Washington, D.C.'s school system. In Oakland, he left behind a full-blown financial crisis. With a dreadful sense of déjà vu, many worry that Oakland schools are careening back into insolvency and state receivership.

The school board attempted to plug financial holes earlier this year by ordering millions in cuts. But according to administrators, this budget trimming, which added up to $32.5 million, wasn't enough. Now school officials are pushing to slash another $15 million from this year's budget. They say that if the district doesn't make the cuts, it could result in another state takeover.

School officials place most of the blame on structural problems, from Proposition 13's multi-decade erosion of per-capita revenue to Oakland's unique challenges in educating a disproportionately larger share of special education students.

But others say the problem is mismanagement. Out-of-control spending by the district's previous superintendents — there have been five in the last eight years — on central office jobs, consultants, and contracts is a concern raised by skeptical parents and teachers at school board meetings.

"This didn't start under Antwan Wilson," said Hugh Morrison, a parent whose child attends Edna Brewer Middle School, "but he certainly made it a lot worse."

Budget records reveal that in 2013-2014, the year before Wilson arrived, spending on administrative jobs across the system totaled $27 million, just $1 million over the budgeted amount. Last fiscal year, administrative salaries reached $42 million, but the district only budgeted $29 million.

As a result, there has been less money available for books and teaching supplies. This past year, the school board budgeted $20 million for educational materials, but the district only spent $6 million.

Last week, parents of students at Reach Academy, an elementary school in East Oakland where 88 percent of students are classified as "socioeconomically disadvantaged" by the California Department of Education, complained at a meeting of the district's budget and finance committee that teachers have resorted to selling pizzas to raise money for supplies. Now, Reach Academy is facing another cut, part of the $5.6 million that is proposed to be spread across the district's schools. This comes after the district eliminated $68,000 from Reach Academy's Elevation Network program.

"We have these Elevation Network schools, which are supposed to be getting intensive support in the form of extra money at the start of the year," said Mike Hutchinson, who closely follows OUSD budget matters and ran for a school board seat last year. "That money never came, and now they're talking about another $5.6 million in cuts to school sites."

A petition created one month ago by the Justice for Oakland Students Coalition demanding zero cuts to school sites had garnered 1,529 signatures by early Tuesday. It urges "cuts from the top" and greater fiscal transparency.

Andrea Dawson, a member of the oversight committee that tracks OUSD's bond expenditures for facilities, compared Oakland's spending on central administrative jobs and ancillary services (such as janitorial and maintenance) to four other school districts — San Francisco, West Contra Costa, Fremont, and Sacramento — using information from official audits. She found OUSD's expenditures are much higher.

For example, OUSD spent $41.9 million on its administration and ancillary services in 2015, whereas San Francisco, a larger school district, spent less — $37.5 million. Fremont, which is similar in size to Oakland, only spent $13.6 million.

"Even given OUSD's larger special education needs, it's still too high," said Dawson. Even so, Dawson said the district must restructure itself. This might require closing several schools to obtain greater efficiencies.

School closures are a highly controversial topic though, and the board isn't expected to call for any as part of this budget cutting process. But the district is undertaking a "Blueprint for Quality Schools" that might recommend closures next year.

Robin Meyerhoff, a parent at Chabot Elementary School, said the school board needs to put the administration under a microscope. "They're culpable. They were asleep at the wheel," she said in an interview referring to board members. "It was their job to provide oversight."

But fiscal oversight has been chronically lacking. For more than a year, the district has been missing key personnel in its finance department, including a chief financial officer. Instead, the district has hired an outside consultant at a cost of $80,000 to fill the role for this year.

In August, the state Fiscal Crisis and Management Assistance Team (FCMAT), which helps schools manage their money, found OUSD's administrators deficient in several key areas. According to FCMAT, OUSD does not sufficiently monitor and update its budgets; the district frequently engages in deficit spending; the finance department does not maintain adequate fund balances or reserves; district administrators haven't properly accounted for employee pay raises in future budgets; and unauthorized hiring is common and salaries aren't synced with the district's overall finances.

The findings are similar to those from previous FCMAT reviews that led to OUSD's takeover by the state in 2003.

"This is nothing new," said Superintendent Kyla Johnson-Trammell at Monday night's school board meeting. "It's been pointed out to us since the 1990s when FCMAT first came in." Back then, Johnson-Trammell was one of many Oakland school teachers who were laid off by the state receiver.

Contracts with consultants for everything from counseling to software represent another large, questionable expense for the district. District records show that expenditures over the past four years on contracts have always exceeded the original authorized amount. This past year, the district spent $28 million for professional contracts, even though the board had only authorized $21 million in spending.

Monica Caldani-Nasif, a parent whose child attends Crocker Highlands Elementary, said the district lacks transparency when it comes to spending on consultants. "We have a high-level overview of the OUSD budget, but it's things like consulting services, which amounts to multiple millions of dollars, we just don't know what these are."

Some local activists don't think the district should even be spending as much as $21 million on outside contracts. "You go to any school board meeting and you'll see all these millions in contracts, almost always on the consent calendar," said Hutchinson, referring to the part of the board's meeting agenda during which board members rarely discuss what they're voting on. "They just approve them."

The Express reviewed school board agendas for the eight meetings held in the past six months and found an average of 32 contracts with outside professionals and companies placed on the consent portion of each board agenda and passed with little to no discussion. One meeting in June had 77 contracts up for vote with no discussion.

"I've been pulling things off consent and voting 'no' because I thought they were wasteful spending," said school board member Shanthi Gonzales.

School board member Aimee Eng agreed that there are contracts that can be cut to help balance the budget, but she said many of the district's outside consultants provide services for students, like after-school programming and tutoring. Cutting these contracts would still harm students.

But board member Roseann Torres said on Monday that she and her colleagues have failed Oakland children by not intervening when previous administrations were over-spending.

"We were at times voting like sheep," she said of high-paying jobs in the administration and consulting contracts approved by the board. "I'm angry at this entire board for not governing better."

"Hopefully, we can reduce the amount [of cuts] for school sites," said Eng in an interview. She said new financial data will soon be available that could reflect lower-than-expected expenditures in October — which might give the board more leeway to balance the budget. A final vote is scheduled for Dec. 13.

But Eng and Gonzales both said that the magnitude of cuts necessary to avoid running out of cash and preventing a state takeover is simply too large to be absorbed solely by the administration. "There's just no room in central without doing a massive number of layoffs that would result in the district not being able to function," said Eng.

Gonzales said there's reason to be hopeful. The district's problems boil down to a lack of stable leadership and a community of students, parents, and teachers who are only beginning to recover their ability to organize and advocate for changes.

"Every time there's a change at the top, that person wants to bring their own people in and put their own stamp on things," Gonzales said of the revolving cast of superintendents. But the result is a top-heavy administration with too many staff. "During state receivership, there was no reason for parents to be organized because they didn't have any board to influence," she continued. "The institutional memory for the district and the community infrastructure to resist negative decisions dissipated."

Superintendent Johnson-Trammell, whom the board hired this year to lead OUSD, was selected in part because she is seen as having an investment in Oakland schools and unlikely to chase more prestigious jobs. "She's been with the district 19 years — worked her way up from being a teacher and principal," said Eng.

"The new superintendent is amazing," said Caldani-Nasif. "But she's going to need a CFO to partner with her to take our district into solvency. Everything else is just details."