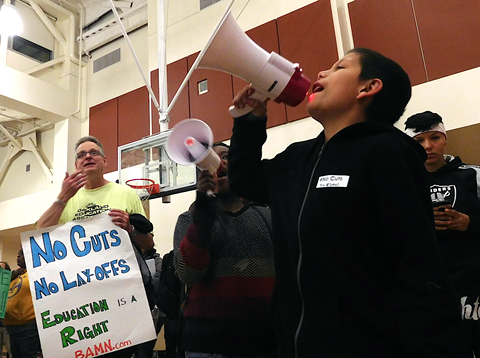 Oakland's school board voted last night to immediately cut more than $9 million from the district's budget. The cuts will impact every school and include layoffs.

District officials tried to describe reductions as less damaging than previous proposed levels, but several hundred parents, teachers, and students voiced anger with the board.

"In the past, there were no electoral consequences to mismanagement," said Mike Hutchinson, an activists who closely follows the district's finances. "Judging by the mood of the crowd tonight, hopefully, that has started to change."

Trish Gorham, president of the Oakland Educators Association teachers union, described the cuts as mostly unnecessary. "The $15 million obviously wasn't real because they came down to $9 million," she said.

As recently as last month, administrators said that $15 million in cuts would be required. That number was revised down to $9 million last week, although there remain questions about how much is actually being trimmed.

The $9 million in budget reductions that were ratified last night will be split, with $3.8 million coming directly out of school sites in the form of supplies, layoffs, and frozen positions. The other $5.2 comes out of the central office budget.

OUSD Superintendent Kyla Johnson-Trammell said the downward revision from $15 million to $9 million was accomplished by updating revenue and expenditure figures that show that the district began to dig itself out of the financial hole in October. But she emphasized that the budget is a moving target and warned directors that if the system doesn't scale back spending further, they'll be taken into into state receivership once again.

“If we're not solvent, if we run out of cash, we lose local control,” said Johnson-Trammel.

Based on the district's history, it's expected that spending on special education, transportation, and food services will go over budget, making cuts above and beyond the $1.1 million for reserves necessary. The school system's administration also expects surprises like future invoices that haven't been incorporated into the current budget to further undermine their fiscal plans.

“We need to make the reserve,” Gorham said about $1.1 million in funds that, by all accounts, must be set aside to avoid state receivership. Beyond that she questioned the wisdom of slashing budgets that will impact school sites in the middle of the year.

The district's budget crisis is both structural and caused by mismanagement. Despite Oakland's booming economy, including real estate development and job growth, the East Bay's influx of new wealth isn't filtering down to school districts like Oakland. OUSD predominantly serves low-income students of color. Many affluent households in Oakland still send their children to private schools.

In terms of management, for several years, former Superintendent Antwan Wilson spent more money than was budgeted on highly compensated administrators and outside contractors. Spending controls in various OUSD departments were absent. The system bled money and didn't know how much it was overspending until it was too late. And the district has never been able to reduce its disproportionately large overhead costs.

Wilson left in February to become the chancellor of Washington, D.C. schools just as the Oakland's budget crisis became known to the public.

His excessive spending on administrative jobs and highly paid consultants are why many parents, teachers, and students have called on the district to "chop from the top."

Rose Chardak and Francisca Gatica, teachers at Roots Academy in East Oakland, said they've had to spend their own money and organize fundraisers just to pay for basic supplies like toilet paper.

“This was before the budget cuts,” said Chardak.

But since janitorial services were cut earlier this year, a rodent infestation has worsened, say teachers. Even more cuts will be untenable.

“We don't have a healthy environment,” said Gatica.

For many, the only good news announced last night was the restoration of special funds that a select number of schools had been promised at the start of the year to pay for programs targeting students who need extra academic support. Called “CALL dollars,” the money supported staff positions like tutors and counselors, but the funding was never actually delivered to the school sites that were expecting it. Instead, the central administration used the money to patch earlier holes in the budget.

District staff said that 75 percent of the CALL funds, or about $600,000, are being restored to multiple school sites using a private donation, plus money from a cancelled contract, and small amounts trimmed from other parts of the budget.

Roseann Torres was the only board member to vote against the cuts. She said she felt that $2 million could actually be restored to the budget, rather than cut. She blamed the school board for not pushing back against Antwan Wilson's over-spending.

The rest of the board seemed convinced that the desperate budget adjustment was necessary. But some directors still questioned whether the cuts are being made in the most appropriate areas.

Director Shanthi Gonzales said it's worth exploring whether or not to cut back on police spending, consultant contracts, and rent at 1000 Broadway, the privately owned downtown office building that the school administration is housed in.

“Oakland youth deserve better than all these cuts,” said Gema Quetzal, a student who sits on the board but can't vote. “Everybody's exhausted.”