While trying to review the investigation, the police commission was told they're not allowed to inspect their own civilian investigative agency's police misconduct case files. 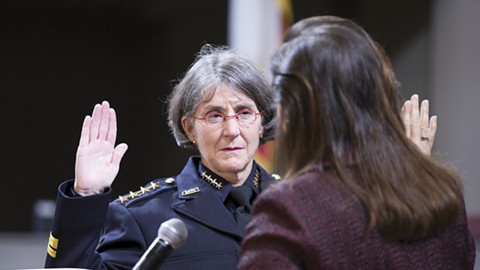 According to Oakland's Community Police Review Agency, Police Chief Anne Kirkpatrick did nothing wrong when she made multiple false and inaccurate statements about an ICE raid that OPD officers assisted in August 2017.

CPRA Executive Director Anthony Finnell closed the case and informed the Oakland Police Commission at its meeting last night about his findings.

But several commissioners expressed frustration with the results because of Finnell's refusal to explain exactly why he cleared Kirkpatrick, despite the existence of video in which the chief made false statements.

Commissioners also questioned why it took a year to complete the investigation.

And in a surprising revelation, Finnell also told police commissioners last night that they're not allowed to look at the contents of CPRA investigative files, even though they're tasked with reviewing cases and approving the CPRA's findings — and determining whether Finnell and his investigators are doing their jobs correctly.

"Why did it take a year to get here, and why are we getting it on the eve of 3304 when there’s almost nothing we can do about it?" Police Commissioner Andrea Dooley asked Finnell.

Under Section 3304 of the California Police Officer's Bill of Rights, cops can't be disciplined for misconduct unless the official investigation is completed within one year. By presenting findings in the Kirkpatrick case as this statute of limitation was running out, there was no possibility for the police commission to question the outcome or ask for further investigation.

In fact, Finnell's presentation of the case to the police commission fell one day before the one-year deadline state law requires misconduct investigations to be completed in.

Finnell, who reports to the police commission, defended the time it took to complete the investigation and his agency's findings.

"We interviewed several individuals and had to review a large volume of documents and sift thought those, so it wasn’t a simple case that could have been closed quickly," he told the commission.

And it actually means that in some ways, Oakland's new Police Commission, approved by voters in 2016, is weaker and has less access to information than the old Citizens Police Review Board that it replaced. The CPRB was able to inspect case files in closed session meetings to determine whether their civilian investigators conducted an adequate investigation.

"It never occurred to us that the commission would have less ability to scrutinize the investigations and investigative reports than their predecessors on the CPRB board," said Rashidah Grinage, a member of the Coalition for Police Accountability, the group that pushed for creation of the new police commission — through the 2016 ballot initiative known as Measure LL.

Brian Hofer, chair of Oakland's Privacy Advisory Commission, filed the original complaint against Kirkpatrick regarding her statements about the ICE raid, and he called Finnell's CPRA investigation inadequate.

"By waiting until the statute of limitations expired, Mr. Finnell ensured that Chief Kirkpatrick would escape any punishment for her wrongdoing," said Hofer.

The August 2017 ICE raid targeted a house in West Oakland where federal immigration agents arrested one man and subsequently initiated a deportation case against him. Kirkpatrick assigned several Oakland police officers to help the ICE agents by blocking off the streets to through traffic. Mayor Libby Schaaf later defended Kirkpatrick's decision, before ultimately deciding that OPD should sever all ties with ICE.

OPD's assistance ignited a controversy because Oakland's sanctuary policies bar the police from working with federal agents to enforce immigration laws. (At the time, OPD was authorized to work with ICE in criminal investigations, however). In response to the incident, the Oakland City Council passed a resolution clarifying that any and all forms of assistance to ICE are prohibited.

But in the days and weeks after the ICE raid, Kirkpatrick claimed that OPD's assistance wasn't a violation of Oakland's sanctuary policy because ICE was carrying out a warrant in a "human trafficking" case. She repeatedly claimed the ICE raid was a criminal matter not involving civil immigration enforcement.

Several weeks later at a public event hosted by Councilmember Abel Guillen, Kirkpatrick again claimed that the raid was a criminal case involving human trafficking, and she specifically stated, on a video recorded by the Express, that "only one person has been charged with a crime, and there is not a deportation matter in this case."


In fact, at the time Kirkpatrick made this statement, no criminal charges had been filed against anyone as a result of the raid. The man who was arrested by ICE, Santos de Leon, was never charged with a crime. Instead, ICE had filed papers to deport him due to an alleged civil immigration violation, contrary to Kirkpatrick's claim.

Kirkpatrick also stated inaccurately in a press release that her department had severed its agreement with ICE before the Aug. 16 raid. But according to the city's own records, OPD didn't provide notice to ICE that it was withdrawing from the agreement until Aug. 25, and the agreement was in effect for another month because it had a 30-day notification clause.

In response to all of the false and inaccurate claims made by the chief, Hofer and several Oakland residents filed their complaint against Kirkpatrick with the Community Police Review Agency, the authority that works under oversight of the police commission to investigate police misconduct and recommend discipline.

Finnell informed the police commission last night that they found Kirkpatrick to be "exonerated" in one of the instances and that it was "unfounded" that Kirkpatrick made two other false statements about the ICE raid.

The "exonerated" decision likely pertains to Kirkpatrick's claim that OPD no longer had a formal agreement with ICE, known as an MOU, when the raid happened. Finnell's investigators concluded that "the act or acts which provided the basis for the complaint occurred; however, the acts were justified, lawful and proper and not violations under law and/or departmental policy."

Finnell did not specifically explain why the acts were justified and lawful, even though they amounted to the spreading of false information by the police chief. It's also unclear why Kirkpatrick made the statement that OPD's agreement was severed with ICE before the raid — when she had nonetheless decided to assign OPD officers to help in the raid. (Kirkpatrick later admitted that the OPD agreement with ICE was still in effect at the time of the Aug. 16 raid.)

The second and third complaints in the case pertained to Kirkpatrick's claims at Guillen's town hall event that one person had been criminally charged as a result of the raid, and that there was no deportation matter resulting from the ICE raid.

Despite the existence of video in which Kirkpatrick made these false claims, Finnell reported to the commission last night that there is "sufficient evidence to determine that the conduct did not occur."

The CPRA may have reached this conclusion based on the possibility that Kirkpatrick genuinely believed that ICE was conducting a criminal investigation and not an immigration raid and therefore wasn't willfully lying, but Finnell again declined to provide any specifics.

"At the time of our complaint's filing, no facts pertaining to the ICE raid in West Oakland were in dispute," Hofer said in response to Finnell's conclusions. "Indeed, the chief had admitted prior to our filing that the MOU with HSI/ICE was not terminated as she claimed. Mr. Finnell demonstrates his lack of credibility by saying none of the three claims were substantiated, when they were so easily and publicly proven."

Under Oakland's police oversight laws, if the CPRA, which works for the civilian police commission, and OPD's Internal Affairs Division agree on findings in a case, the case is closed without further action. But if CPRA and IAD disagree, the case can end up coming before the commission's discipline committee for a review and action. Only in these instances would three police commissioners who serve on the discipline subcommittee get a chance to look at the contents of a case file, according to Finnell's interpretation of Measure LL.

"The cases are closed," Finnell said about the complaint against Kirkpatrick, indicating no disagreement with IAD.

Finnell also closed a separate case last night involving an Oakland police officer trainee who was arrested while driving drunk across the Bay Bridge last month. That officer faced no discipline because the cop resigned. The officer's identity and details about the case are confidential, per state law.

Frustrated with the lack information about why CPRA closed Kirkpatrick's case, the commissioners voted last night to explore a possible legislative change that would allow them to review detailed contents of cases in closed session meetings.

Hofer said after the meeting in an email to the Express that the whole controversy could have been averted had city officials simply acknowledged making a mistake.

"Neither the Mayor, City Administrator, or Chief Kirkpatrick have apologized to the innocent immigrant family for assisting ICE in the raid, and for slandering them as 'sex traffickers' of children," he said.
Prev
Next