Oakland Restaurant Week Is Just Around the Corner

It’s your chance to grab a multi-course meal at a discounted price — and maybe even for a good cause. 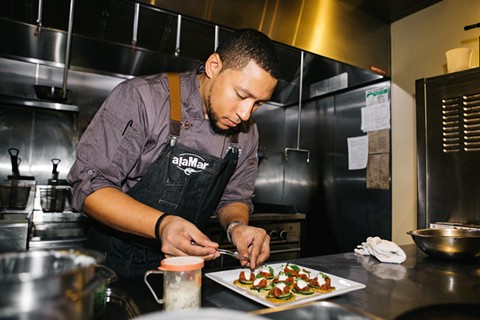 Plus, Oakland Restaurant Week is partnering this year with the Alameda County Community Food Bank. Some restaurants are donating a portion of restaurant week proceeds to the food bank, and all restaurant week customers are encouraged to make a donation. The food bank will use the proceeds to distribute fresh food and alleviate child hunger in schools and the greater community. To view more information about participants or to donate, visit OaklandRestaurantWeek.org.

Chop Bar
Chop Bar (247 4th St.) is offering a three-course dinner with a glass of Urban Legend Wine Company tap wine for $30. For starters, choose from an arugula salad with Point Reyes blue cheese, candied walnuts, and fruit, or the soup du jour. For mains, choices include meatloaf with garlic mashed potatoes and trotter gravy, polenta with smoked pork shoulder and Brussels sprouts, or veggie pasta with goat cheese. For dessert, choose between banana rum chocolate chip bread pudding or a fruit crisp. This deal offers some serious savings; the meatloaf entreé will normally run you $22, and the salad will run you $12.

Clove & Hoof
For $20, Clove & Hoof (4001 Broadway) is offering its famous cheesesteak, made with thinly sliced sirloin, onion confit, mushrooms, matchstick-cut turnips, and a warm beer cheese fondue on a hero roll. The deal also includes beef tallow French fries, a chocolate chip cookie, and a restaurant week-exclusive rosemary Meyer lemonade. The cheesesteak and fries alone would normally cost $20, so you’re essentially getting the lemonade and cookie at no extra cost.

alaMar
This year, alaMar (101 Grand Ave., Ste. 111) is offering deals for every time of day. For lunch, Tuesday through Friday, the $10 deal includes your choice of fish tacos or chicken tostadas, both served with a mixed greens salad and soft drink. Or head over on a weekend for brunch. For $20, you’ll get a pineapple mimosa, plus your choice of red velvet pancakes with wings or a fried oyster hash with poached egg. The deal also includes a side of sweet plantains, lemon pepper spiral fries, or andouille sausage. Or for dinner (excluding Saturday, Jan. 19), there’s a $30 two-course menu. Start with shrimp sopes or wings. Entrées include chicken with mango salsa or oxtails with rice, black beans and plantains, or shrimp with crema criolla sauce, potatoes, and chorizo. Brunch is a particularly good value; the pancakes with wings normally cost $13, and the lemon pepper fries typically cost $8, so you’re saving a little money and getting a mimosa, too.

Brotzeit Lokal
Waterfront biergarten and German restaurant Brotzeit Lokal (1000 Embarcadero) is offering a $10 lunch deal that includes a sausage with fries or salad, or a lunch salad topped with potatoes, bacon, egg, and avocado. Or there’s a $40 dinner prix fixe that includes your choice of appetizer (including potato pancakes), an entrée (think goulash or a game sausage platter), and dessert (apple strudel or bread pudding, anyone?), plus a signature cocktail. If you order the prix fixe dinner on Saturday, Jan. 12, Brotzeit will donate a portion of those proceeds to the food bank. There’ll also be live music that night for diners to enjoy.

Correction: The original version of this report misstated the prix fixe dinner at alaMar. It's $30, not $40.
Prev
Next