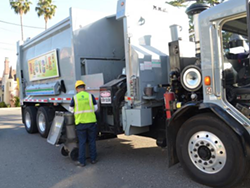 While much of the recent controversy around Oakland's new garbage contract has centered on the exorbitant rate increases for commercial composting, the City of Oakland has quietly put forward a new proposal to increase the recycling rates for all residents beyond the fees that officials negotiated and approved last year. On the agenda of the Oakland City Council tomorrow is a proposal from the city's Public Works Agency to raise recycling rates by more than 10 percent to resolve a dispute with the private contractor California Waste Solutions (CWS). The proposed hike would enable CWS to increase its annual revenue by roughly $800,000, according to the report.

CWS — a West Oakland-based firm that took over citywide residential recycling services in the new franchise agreement that began in July — said that city officials had originally provided the company with incorrect information on the total number of households it would be serving, according to the report. Joel Corona, chief operations officer for CWS, said in an interview today that the city initially told CWS that the company would be serving roughly 165,000 customers — which the company used to determine its rates. But according to Corona, that was an overestimate and the company is now only serving roughly 155,000.

It's unclear why the city overestimated the number of households that CWS would be serving under the new contract. The report states that the city used "raw data" from Waste Management (the other Oakland private contractor that previously did half of the city's residential recycling services), but that this number "proved to be incorrect." Sean Maher, spokesperson for the city's Zero Waste Program, declined to comment today. According to the city's report, CWS has claimed that the difference equates to annual losses of roughly $800,000.

It's also unclear why California Waste Solutions is not cutting its own costs rather than demanding that Oakland residents pay for them. Corona contended that the company has fixed costs that it previously calculated based on the 165,000 estimate and that it now needs to raise rates to make up the difference.

This issue, which has received no attention or scrutiny so far, led the city to negotiate a clause into the final contract adopted earlier this year that said the city and CWS could at a later date negotiate additional increases to rates based on the "differential between the number of households assumed by CWS in their cost proposal and the number of households actually served by CWS." The subsequent negotiations have resulted in the proposed rate increases that the council will consider tomorrow. If approved, residents' rates would increase by roughly one dollar per household per month starting in July of 2016. The increases beyond the fees initially approved would continue through 2021, according to the city's report. CWS has a twenty-year contract for recycling.

These two charts from the city's report (pages 3-4) detail the proposed hikes for single-family units and multi-family dwellings. The "unit count adjustment" row in italics shows the actual proposed price increase to resolve the dispute and the "monthly rate w/ unit count adjustment" shows what the new rates would be:

According to the report, the city could propose additional rate increases in subsequent years based on the number of customers CWS serves. The report states that starting in 2016, the city will conduct a review each year to establish the actual number of households billed and compare it to the unit count used by CWS in its original calculations and rate proposal. "The results of the review will be used to determine whether CWS has experienced a revenue shortfall in the previous contract year. Any shortfall would be corrected by increasing the rates of the residential customers billed the following year," the report states.

It remains to be seen whether this proposal will spark additional controversy at the council. Since the new franchise launched this summer, most of the backlash has focused on the rates of Waste Management, the Texas-based corporation that sued the city last year to win back the contract and now is responsible for trash and composting services for Oakland residents and businesses. Both restaurants and homeowners have criticized the city and Waste Management for not transparently disclosing massive increases that were also environmentally questionable.

On the business side, the city had approved composting rates that were significantly higher than trash rates, incentivizing business to throw food waste in the trash instead of composting. The city and Waste Management have since re-negotiated this part of the contract, and the council is considering a proposal to lower business composting rates tomorrow. On the residential side, homes with the smallest trash bins (meaning residents who produce the least waste) have faced disproportionately high rate increases. There are no efforts underway to change that portion of the contract

The city council will debate both waste contract proposals tomorrow, September 29 at a special meeting starting at 6 p.m.

Update, 7 p.m: Maher, city spokesperson, emailed me a statement about the discrepancy in residential recycling customers: "The City received raw data from Waste Management of Alameda County, Inc., listing all residential Oakland customers and their service levels. This information was robust and accurate, and the City provided it to all proposers along with direction that they perform their own due diligence analysis of the data. The City’s own analysis, also provided to proposers, included a number of customers who were listed for multiple services and whom the City counted more than once, resulting in the 165,000 household total figure."