A coalition of activists opposed to the construction of Oakland’s Domain Awareness Center say they're ready to take the city to court to stop the controversial surveillance project. Brian Hofer of the Oakland Privacy Working Group is delivering a letter to Mayor Jean Quan, the city council, the city administrator, and the city attorney today. The letter states that the group will "seek judicial relief" to halt the project. The group claims that the proposed contractor to carry out work on Phase 2 of the DAC, Schneider Electric, is also a nuclear weapons contractor, and that hiring the company would violate Oakland's Nuclear Weapons Free Zone Ordinance.

The Express reported on November 19, 2013 that all of the contractors under consideration for the contract to build the DAC were linked to nuclear weapons work, but that Schneider Electric seemed to have only indirect contracts, providing security cameras to a Navy nuclear weapons facility.

Since then the Oakland Privacy Working Group uncovered detailed evidence of what they say is Schneider Electric's close work with military and US Energy Department agencies that design, build, and deploy nuclear weapons systems. The letter delivered to the city today includes a photocopy of Schneider Electric marketing materials in which the company describes itself as a "global specialist" in "weapon launching control system for nuclear submarines," and "nuclear weapons handling systems."

The activists have opposed the DAC on grounds that the surveillance system will infringe on civil liberties, that it could be prone to abuses by police or other staff with access to its data, that hackers could breach the system, and that surveillance systems are not proven to reduce crime and improve public safety. But opponents of the DAC have found the city's anti-nuclear weapons contracting law may be the most practical way to fight it. The first contractor on the DAC, SAIC (now called Leidos), was dumped by the city recently after it was revealed that SAIC has been paid millions by the federal government to carry out projects in support of the nation's nuclear weapons program.

"Oakland has for decades declared that it will in no way be complicit in building nuclear weapons and has refused to work with any nuclear weapons contractors. These are Oakland values," the Oakland Privacy Working Group said in a press release. "Unfortunately, it seems that our current crop of city leaders do not share these values." 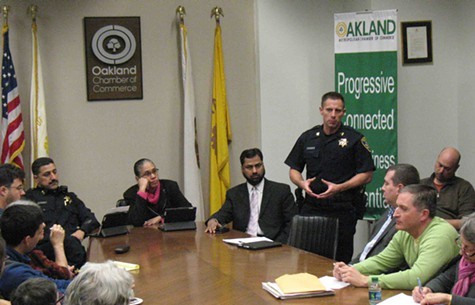 Domingo said the DAC would help the city respond to potentially catastrophic disasters and crime. "We did not have an emergency operations center during the Oakland hills fire, or the [Loma Prieta] earthquake."

"We didn't envision the crime fighting aspect of the DAC until we we're well into it," Domingo said.

The Oakland Police Department is now intimately involved in the development of the DAC as an operational tool to monitor crime and political protests.

"There are video cameras everywhere in the city," Allison told the League of Women Voters audience. "Beyond the fifty the city has, there are cameras in stores, in parking lots, they are everywhere." According to Allison, the DAC is only an expansion of existing surveillance already conducted by OPD.

Figueroa said he's visited Chicago, New York, and other cities to look at the surveillance systems their police agencies have built. "When a shooting happens they're right on it," said Figueroa. "They try to figure out what gangs are fighting at the time, other officers are looking at ShotSpotter data, and looking at what cars have been in the area.

"We have a lot of issues to deal with, data storage and others, but we're talking about what's a sensible policy," he continued.

"If the city moves forward with these plans, legal action will be taken to stop it," said the Oakland Privacy Working Group in a press release.