Oakland Police Commissioners Complain to Mayor About Lack of Support 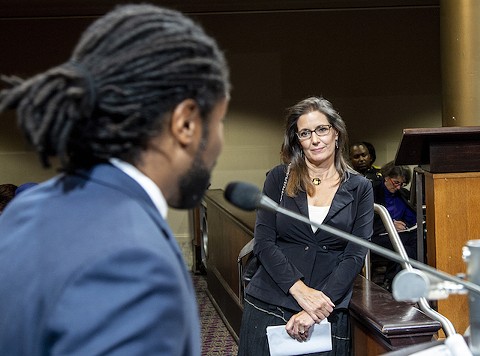 Nine months after the Oakland Police Commission held its first meeting, members of the oversight body continue to complain that they’re not being given adequate resources to do their job.

Members of the public who have closely followed the commission’s work since it first met in December 2017 also remain critical of the city administration's slow pace to hire staff and provide training and other assistance.

“This commission has not been able to get anything that we need, including assistance from Mr. Luna, or any other person from the city administrator’s office,” Commissioner Ginale Harris told Schaaf, referring to a member of Oakland City Administrator Sabrina Landreth’s staff. “They give us the bare minimum.”

In her first visit to Oakland’s police commission, mayor Libby Schaaf is told by commissioner Ginale Harris that the commission is being undermined by the city administration. #oakmtg pic.twitter.com/7TiKyhgPmT


Harris continued, complaining to the mayor that the commission still doesn’t have a staff, and that disagreements over legal representation for the commission have bogged down its work on all fronts.

Schaaf replied that she’s sorry the commissioners have had a “frustrating experience” and that she hopes to bolster their work. She also said the slow pace affects all of the city, not just the commission.

“I find myself, although next year will be my 20th year working for the city of Oakland, still frustrated at the speed of government,” said Schaaf. She thanked the commissioners for being the first. “You all are having a hardest time because you’re building something brand new.”

Henry Gage, an Oakland resident who was a finalist for the police commission and has since attended most of its meetings, addressed Schaaf during public comment and characterized the city administration’s relationship to the commission as “active opposition.”

“I need you to stop just talking and do more, please,” Gage said to Schaaf.

Rashidah Grinage, an activist with the Coalition for Police Accountability who helped create the police commission, further criticized the city administration and Schaaf, saying that the city has done “nothing to let folks in this community know there is a police commission.” Grinage said the city administrator should conduct an outreach campaign so that the public can become more involved.

The police commission was created by voters in 2016. It has the power to review and create policy for the police department. The Community Police Review Agency, which is overseen by the commission, investigates civilian complaints of officer misconduct, as well as instances of police use of force, in-custody deaths, racial profiling, and officer misconducted related to first amendment protected activities such as public assemblies.

The complaints by some of the police commissioners that they’re being stymied by the city administrator aren’t new. Since their first meeting, the commissioners have clashed with administration staff and representatives of the Oakland Police Department.

Most recently, OPD’s head of planning and research, Tim Birch, told the commission that they don’t have full authority over certain policies and that the department can decline the commission’s policy direction.

Earlier this year, the commission also requested that the new inspector general position (a commission staff member who will audit OPD and report to the commissioners) be fully under their control and that this include the sole ability of the commissioners to hire, evaluate, and fire this person. Oakland City Administrator Sabrina Landreth objected to this proposal because, according to Oakland’s city charter, all city staff are under her direct supervision, unless specifically stated in the charter.

The city council ignored Landreth’s protest and voted to approved an ordinance allowing the commission to directly supervise their OIG.
Prev
Next