Oakland Police Chief's Troubles Resemble Those of Her Past

Anne Kirkpatrick has been facing tough questions about her honesty and commitment to reform — just like she did in her last job as chief. 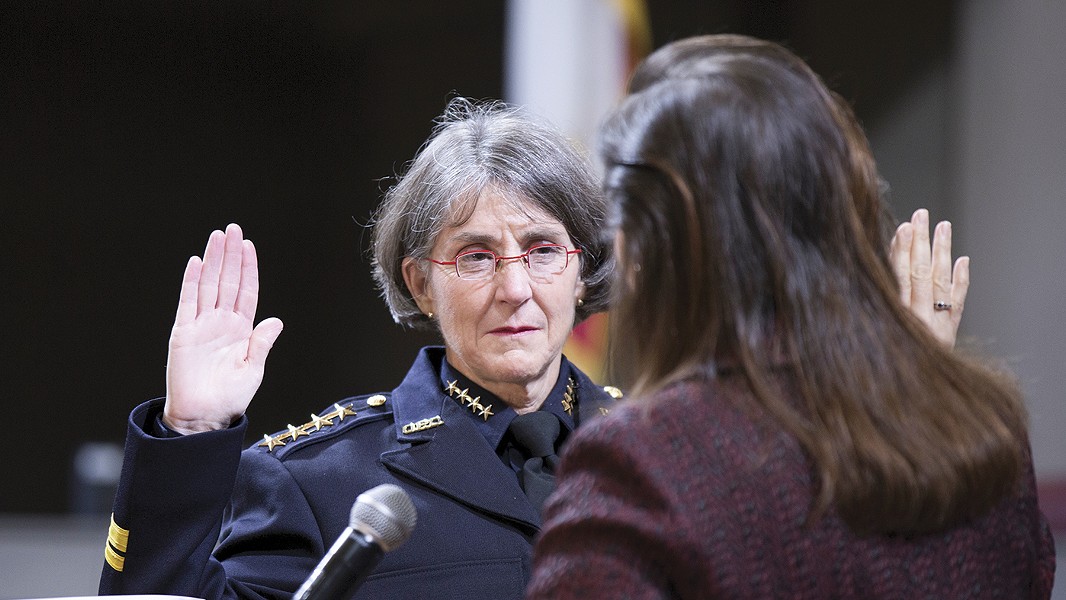 Last year, when Anne Kirkpatrick took over as Oakland's new police chief, OPD was reeling from a scandal that had left deep distrust between the city's residents and the department. Mayor Libby Schaaf touted Kirkpatrick as "the reform-minded leader Oakland's been looking for" and said she would "bring greater accountability, justice, and safety to our city."

But since taking the job, Kirkpatrick has faced controversy in Oakland, including for her decision to promote command staff implicated in the cover-up of the massive sex abuse scandal involving the underage daughter of a police dispatcher. The chief also has come under fire for allowing Oakland police officers to assist in an August raid by ICE agents that resulted in the arrest of a man for allegedly being in the country illegally — an incident that raised questions as to whether OPD's involvement in the case violated Oakland's sanctuary city law.

And a review of Kirkpatrick's record as a police chief in other cities reveals similarities to the troubles she now faces in Oakland. Over the years, she has been no stranger to scandal, she has a history of trusting cops who lie and of standing behind those who have engaged in gross misconduct, and her commitment to police reform has been less than stellar.

A decade ago, Kirkpatrick became chief of the Spokane Police Department in Washington just after a controversial in-custody death that eventually led to the indictment and conviction of two officers. When she left more than five years later, the incident still loomed over the department, and its relationship with the city was as damaged as ever.

Reviews of Kirkpatrick's performance there are mixed. A scathing U.S. Department of Justice report concluded that the Spokane Police Department lacked leadership and transparency under Kirkpatrick. And many basic police reforms like having officers wear body cameras were only enacted after Kirkpatrick's departure. But her allies from Spokane also contend that Kirkpatrick was as much a victim of a cover-up as anyone, saying she was repeatedly lied to by her own officers and even the city attorney's office.

Before arriving in Spokane, Kirkpatrick had been a police officer in Memphis, Tenn., in the early 1980s. She earned a law degree from Seattle University in 1989 and was a police officer in Redmond, Wash., from 1987 to 1995, according to her résumé. She first became a police chief in Ellensburg, a city with fewer than 20,000 residents in rural Washington, in 1996, and in 2001 became police chief in Federal Way, Wash., a Seattle suburb with 87,500 residents.

Kirkpatrick was announced as the next police chief in Spokane on July 20, 2006, and took over the job on Sept. 11. At the time, Spokane had a population of just under 200,000, about half the size of Oakland. And the Spokane Police Department was embroiled in controversy over the death of Otto Zehm, a 36-year-old janitor who suffered from a developmental disability. According to a Department of Justice press release, on March 18, 2006, Officer Karl Thompson Jr. attacked Zehm from behind in a convenience store with a baton, hit him in the head, deployed a Taser when Zehm was on the ground in a fetal position, and continued to beat him. Zehm died in a hospital two days later.

SPD provided shifting explanations for why the use of force was necessary against Zehm, saying he had lunged at Thompson and had refused to drop a plastic Pepsi bottle, prompting Thompson to react defensively. But the department also fought the release of security camera video and other public records related to the incident.

The FBI opened an investigation a few months later. The U.S. Attorney for the Eastern District of Washington at the time, James McDevitt, said in a recent interview that he was reluctant to step in but found that the local prosecutor was not handling the case properly. The city attorney's office and the police officers' union fought the investigation at every step, he said, withholding evidence and refusing to cooperate. When the U.S. Attorney's Office called officers before a grand jury, some had to return multiple times to revise their testimony.

McDevitt said he called Kirkpatrick when she came on as chief and alerted her to the ongoing FBI investigation as a courtesy. Kirkpatrick, he said, was also being lied to by her own officers and the city attorney's office, which led to her making public statements in support of Thompson. McDevitt said Kirkpatrick and Jim Nicks, the acting police chief who preceded her, "were the only two people that I thought I could trust" in the department.

But three years later, as the investigation went on, Kirkpatrick continued to give her "unequivocal support" to Thompson, according to the Spokesman-Review, the city's only daily newspaper. "Based on all the information and evidence I have reviewed, I have determined that Officer Karl Thompson acted consistent with the law," she said on March 1, 2009, less than four months before Thompson was indicted on charges of using unreasonable force and lying to investigators.

It took more than two years before the case went to trial. By then, there were unconfirmed reports in the local news that Kirkpatrick would be leaving the chief's position in the coming months. Thompson went on trial in October 2011, weeks before a mayoral election. On Nov. 2, Thompson was found guilty of civil rights violations and obstruction of justice. On Nov. 8, mayoral candidate David Condon defeated incumbent Mary Verner. On Nov. 11, Kirkpatrick announced her retirement, and on Nov. 16, Verner asked the Justice Department to conduct a review of the department.