'We’ve been left out of those opportunities for generations.' 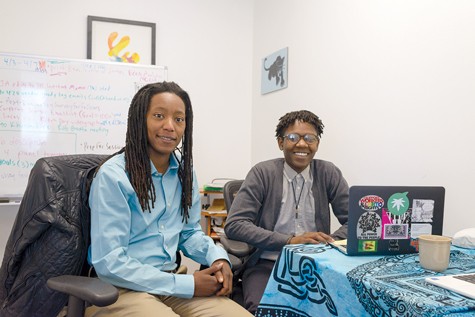 Legal cannabis is a multibillion-dollar industry. And like most others, it’s also predominantly white. Unfortunately, if people of color want a stake in the Green Rush, they’ll have to deal with an economic system that’s consistently rigged against them.

About 97 percent of venture-capital funding, for instance — which has become a major source of money for legal marijuana — goes to white men, and Black entrepreneurs accounted for less than 2 percent of small business loans in 2014.

At the same time, as the War on Drugs raged in the East Bay and beyond, people of color accounted for most marijuana arrests and convictions across the country. Without clean records, it’s that much harder for Blacks, Latinos, and other targeted minorities to start legitimate businesses of any kind, let alone in marijuana.

But the Hood Incubator hopes to change this by giving aspiring East Bay entrepreneurs of color an advantage in cannabis that they so often miss out on in other industries.

The Oakland nonprofit was founded by co-directors Ebele Ifedigbo and Lanese Martin (along with Biseat Horning, who serves as its lead organizer). Ifedigbo has an MBA from Yale University and previously worked with the NAACP, on closing the racial wealth divide. Martin has an MBA from Dominican University and a professional background in community and coalition building. Both saw a chance to address the growing racial divide in the cannabis economy.

“Not only did we see a huge opportunity [in cannabis], but we noticed that other people saw the opportunity — and it wasn’t people who looked like us at all,” Martin said. “Without active involvement, policy might even go as much as to keep those who are going to be impacted by the War on Drugs out of the industry.”

The Hood Incubator is a champion for equity in cannabis. Its focus is on community work, political and legal advocacy, and economic development through the pre-seed accelerator, which offers its participants 100 hours of training and mentorship from Oakland’s mainstream cannabis community.

When it came time to pick fellows for the first round of its pre-seed accelerator — a kind of workshop for new businesses — the founders had 40 applicants to choose from. They only wanted to take on 10 for their January class. But, instead, they chose 15 students, each looking to learn how to succeed in the cannabis industry — all of whom are people of color.

The cohort meets at the East Bay Cannabis Community Center, where they hear from people such as cannabis attorney James Anthony and the founders of Supernova Women, a local organization that supports women of color working in cannabis.

The inaugural class comes from a variety of professional backgrounds. Some have a stake in the underground cannabis industry but want to start legal businesses, while others are there to learn management practices and develop industry connections for their newly established companies. Or, they came from more traditional industries — the culinary world, marketing, PR — and are ready to utilize their skills in the growing cannabis trade.

Each was chosen for their willingness to collaborate and cooperate, preparing them to create a community outside of traditional funding models like bank loans. “People are interested in not only how can my business succeed, but how your business can succeed and make my business succeed, and vice versa,” Ifedigbo said.

Together, the fellows are given the opportunity to workshop their business plans, down to the nuts-and-bolts details, with other entrepreneurs of color, while building essential networks along the way.

“A lot of times, you go around spaces, conferences, wherever, and you’re the only [person of color] — this is not just cannabis,” Ifedigbo said. “Given the context of the cannabis movement and the War on Drugs, it’s even more important, and special, to be able to do this work in a group of folks who are experiencing similar challenges and conditions that you are.”

This extends outside of the classroom, too: Through public events and other efforts, the Hood Incubator has grown a 500-strong community at both the local and national levels, providing a potential customer base for its fellows and a support system for future activism. And by working to improve cannabis legislation and education, Ifedigbo and Martin hope to create a safer, friendlier business environment for its entrepreneurs — and for all people of color across the country.

On April 20, the Hood Incubator will host a 4/20-themed community gathering. It’s a ticketed event, but they also have free monthly meetings to update new and current members on what’s happening with cannabis in Oakland.

“We’ve been left out of those opportunities for generations,” Ifedigbo said. “Any time we’re talking about business, or getting into these types of large-scale, competitive types of business opportunities, our people are going to need some extra resources and support.”