The median home sales price in Oakland skyrocketed a whopping 76 percent over the last year, according to newly released data from ZipRealty, a local real estate firm.

The rate of the increase in Oakland largely surpasses the jumps in San Francisco and the Bay Area in general. More details and graphs below.

"You can see it in our search traffic. People are starting to look out of San Francisco and to the East Bay," Lanny Baker, the company's CEO, tells the Express.

Here's a chart from ZipRealty that outlines the key stats (click for larger version).

And here's a map of the East Bay prices: 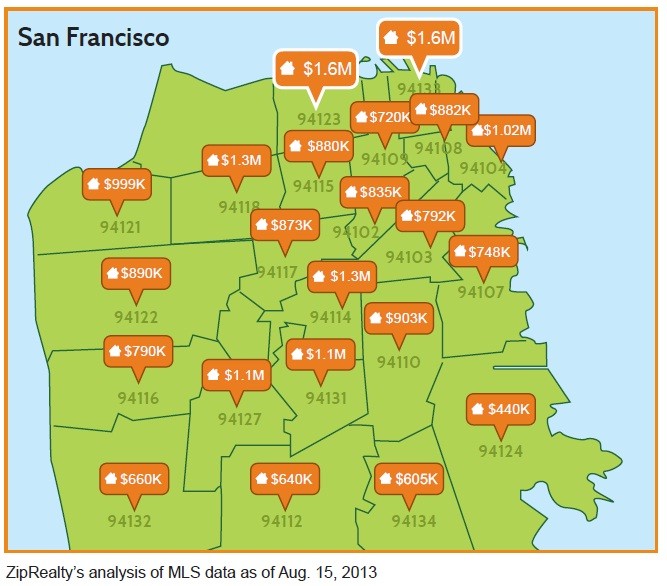 The company notes that Oakland and other East Bay communities were impacted more severely by the foreclosure crisis, which affected real estate values here and set the area up for dramatic recovery in prices. And there are a range of other factors to consider, including the relative number of homes on the market.

"San Francisco buyers come here and have entered the Oakland market with much higher comfort zones," he says. "That's propelled Oakland prices up quickly. In percentage gains, it's enormous."

Because San Francisco prices did not fall as hard during the downturn, Baker notes, the upswing in the East Bay is relatively huge, even if prices here are still much more affordable.

"I do expect Oakland to continue to be strong," he says. "We're entering what feels to us and looks like to us a very sustainable recovery."

If you're curious, the report says the most expensive zip code in Oakland is 94610, where the median home price was $743,000 as of August, giving the area a 130 percent increase from the previous year. That area includes Grand Lake, Adams Point, Lakeshore, Crocker Highlands, and Trestle Glen neighborhoods.